END_OF_DOCUMENT_TOKEN_TO_BE_REPLACED

In AMD/ATI laboratory test, four Radeon HD 4870 X2 have been combined. But AMD will not release any drivers for such an Octa Crossfire bundle. In consideration of a motherboard that would have to be able to bear four dual slot graphics cards and the required scaling, Octa Crossfire should be seen as nothing more than a technical gimmick.

Read the rest of the news HERE. 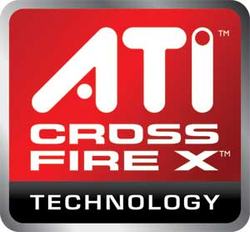 Since Radeon series 4800 cards offer so much value, it might even be interesting to pair them in CrossfireX mode. AMDs ATI solution can be paired and matched as well. So today Guru3D has placed several cards together in CrossfireX mode.

No kidding it is sick how much performance these cards combined can push, the 2-way GPU scaling is just really superb. Crossfire with two series 4800 cards definitely makes more sense than NVIDIA’s high-end SLI money wise.

The guys over at TweakTown have reviewed three Radeon HD 4870 in CrossfireX.

Already impressed with the HD 4870, we strap three of them into IBP’s 4GHz rig and see what happens.

Eighteen months ago when nVidia’s GeForce 8800 GTX was king of the hill, a multi-GPU setup was either ostentatious and reserved only for the most die hard gamer if you were using a high-end card, or downright silly if you were pairing up midrange and lower. NVIDIA’s SLi initiative, started back with the GeForce 6 series, was basically a kludge designed to wring that last ounce of performance out of the cards of the era for the deep-pocketed enthusiasts. ATI’s CrossFire, when it debuted up until the release of the Radeon X1950 Pro, was an embarassment, offering poorer performance and compatibility than NVIDIA’s solution.

TweakTown has tested four Radeon HD 4850 in CrossfireX on the trusty 4GHz QX9650.

Two cards really is the sweet spot for HD 4850s at the moment; we see some good gains over a single card and the cost is still relatively low compared to the competition.
…
AMD have a winner on their hands with the HD 4850; just don’t expect to see the same value for money as you start climbing the ranks with three or four cards. It could still be a while before we see these kinds of setups represent any form of value for money, much like NVIDIA with their Tri SLI GTX 280 setup.