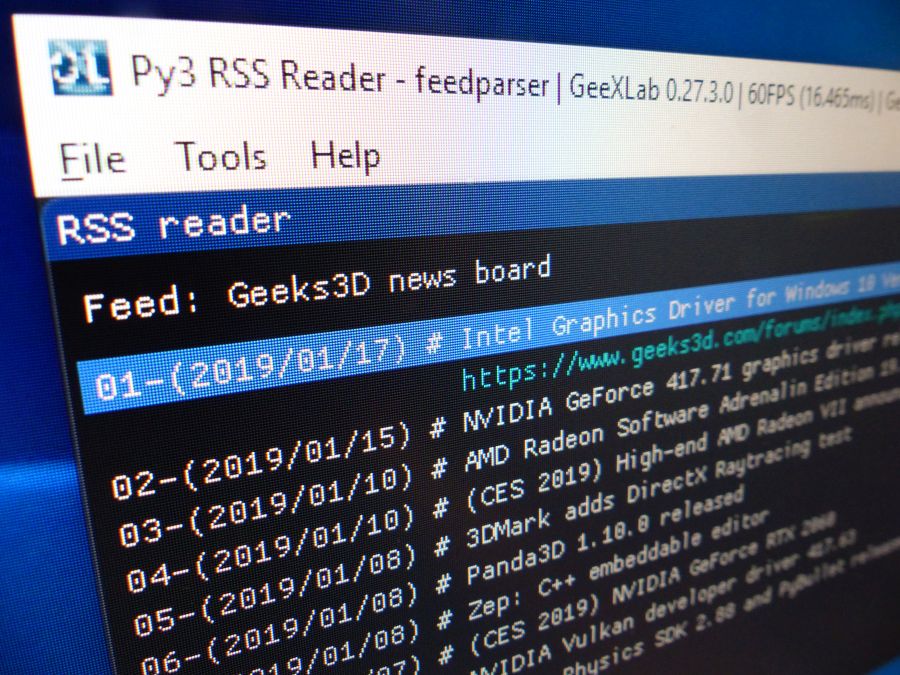 I tested both libraries on Windows 10 64-bit (v1809) with latest Python 3.7.2. These demos should also work on Linux but I didn’t tested that aspect. Feel free to post a comment here or in the forum if you encounter a problem on Linux (as well as on Windows…). 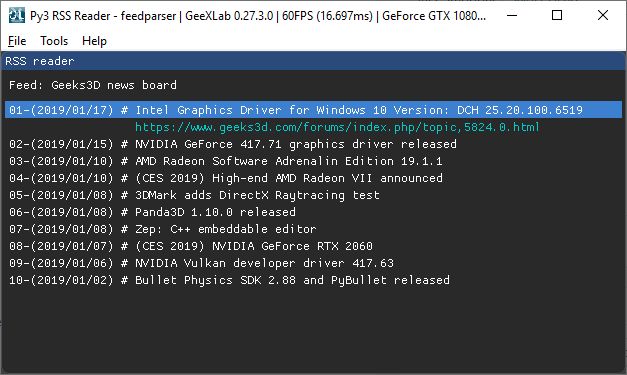 feedparser seems to be the most popular feed parser library. feedparser can parse Atom and RSS feeds in Python 3. You can download feedparser from THIS REPO.

To install feedparser, unzip the repo, open a terminal in the repo folder and type:

Now that feedparser is installed, here is a basic use of that library:

We have parsed Geeks3D RSS feed!

Now let’s display it by looping over all feed entries. In this code snippet, are displayed only the date, title and link of a feed entry:

Atoma is another library for Python 3 that deals with RSS feed parsing. Like feedparser, Atoma is simple to install and use. You can download Atoma from THIS REPOSITORY.

To install Atoma, unzip the repo, open a terminal in the repo folder and type:

An optional but useful library to install alongside Atoma is Requests. Requests can be downloaded from THIS REPO.

As for other libs, unzip the repo, open a terminal in the repo folder and type:

Now that Atoma and Requests are installed, let’s look at how to read the RSS feed of GeeXLab blog:

We have parsed GeeXLab RSS feed! We are the best!

Now let’s see how to display the feeds:

As you can see, displaying feeds with Atoma is pretty similar to feedparser. We are fortunate!

A note on GeeXLab demos on Windows. GeeXLab for Windows comes with a Python 3 installation. If you want to use your Python 3 installation (usually in C:/Users/YOUR_NAME/AppData/Local/Programs/Python/Python37/) with GeeXLab, you have to specify where is located the Python home. You can start GeeXLab with the /python3_home command line option:

A .bat file is available in GeeXLab root folder (start_set_python_home.bat). Edit the Python 3 home path and run it.