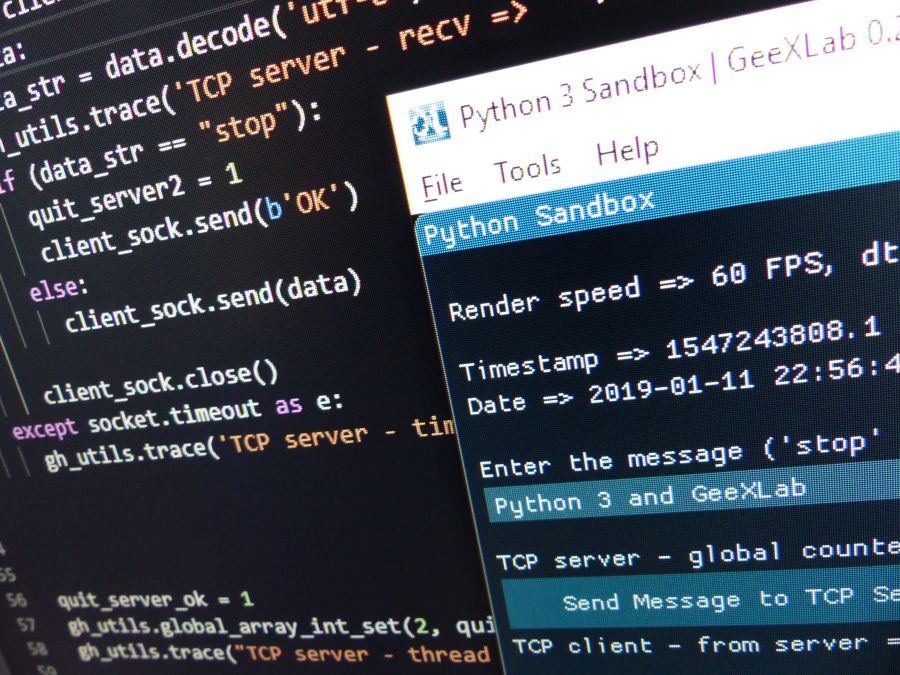 Today let’s see how to code a simple TCP server (as well as a TCP client) with the socket module.

This demo requires GeeXLab 0.27.2+. This is important because this version of GeeXLab adds the support of Python’s GIL. What is the GIL? It’s Python’s Global Interpreter Lock. It’s simply a lock that allows to run python scripts in separate threads. Thanks to the GIL, you can have two Python scripts, each running in its own system thread, that work without crashing the whole application.

In GeeXLab, there is a way to start a script in a separate system thread: just create a ZOMBIE script, and when needed, start its execution in a new system thread with the gh_utils.exe_script() function. In the demo, the exe_script() is called at the end of the init.py file.

As usual, to test the demo it’s simple. Be sure to have GeeXLab 0.27.2 or higher. Download and unzip the demopack where you want. You will find the demo in the socket/02-socket-tcp-server/ folder. Drop the main.xml in GeeXLab, that’s all.

Type any message and click on the Send Message button to send your message to the echo server. 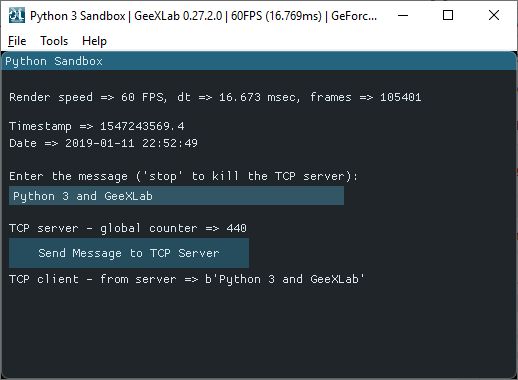 Here is the script (tcp_server.py) of our echo TCP server.

Here are two options to create a stoppable TCP server:

In the demo both options are in service. When you quit the demo, the terminate.py script is executed and a stop message is sent to the server if it’s still running.

Here is the code of the TCP client that sends the stop message:

Here is the same code but this time with a variable for the message and the handling of the server reply:

As you can see, coding a TCP server in Python 3 is rather easy. Ok, this server can handle only one client at the same time, but it works. To handle multiple clients, the server must create a thread per client (this time the thread can be created directly in Python). Maybe in another demo… 😉