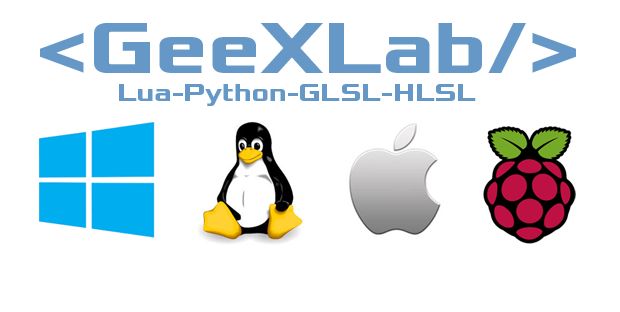 GeeXLab 0.11.0.0 does not bring important new features. It’s rather a maintenance release and brings all latest changes to all platforms.

On Linux and Windows, the PhysX 3 plugin has been updated with the latest PhysX SDK 3.3.4. On OS X, the PhysX plugin is still based on PhysX 3.3.2 SDK because the new SDK 3.3.4 does not support yet Xcode 7.x and I got tons of compilation errors. The PhysX engine does no longer come with pre-built binaries. Now, you have access to the PhysX source code (you have to be a NVIDIA registered dev and you need a Github invit to download the source code) and build binaries yourself from the source. On Linux and Windows, this process works flawlessly, but not on OS X (it’s just a matter of properly support the latest Xcode, and I think that NVIDIA will fix it in the next release of the PhysX engine).

The surprise with PhysX on Windows is that the GPU PhysX is no longer available if the PhysX source code is compiled with latest VS2015. Come on NV… So in GeeXLab 0.11.0.0, there is only CPU PhysX on Windows. Same thing on Linux, still CPU PhysX even if the GPU acceleration is in theory supported on Linux. I hope to see GPU PhysX back again with the next update of the PhysX engine.

In the Vulkan side, I updated the texture sub-module and now demos using textures run at full speed: textures are now correctly uploaded to GPU memory. I also improved the support of several GPUs and now, a demo can run on a particular GPU in Vulkan and in Direct3D 12. The multi-output has been fixed on Windows (this feature didn’t work in previous versions, don’t ask me why) and you can now create demos with several windows, each window running on a particular Vulkan (or D3D12) GPU.

GeeXLab 0.11.0.0 as well as the code sample pack can be downloaded from this page. 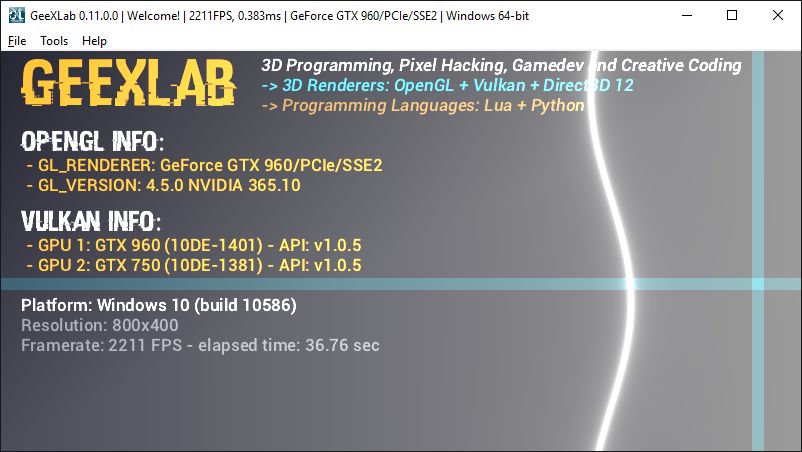