Few weeks ago, I tested the first Intel discrete GPU, the Arc A380. Today, here is a review of the Arc A750, one of the most powerful graphics card of the Arc Series. The Arc A750 Limited Edition is a card made by Intel (like the GeForce Founders Edition made by NVIDIA).

The Arc A750 LE has a neat and sleek VGA cooler, I like it. The cooling is done by 2 fans that work in hybrid mode: the cooler is in passive mode (fan speed: 0) for light workloads. For heavy graphics tasks, the fans spin and the noise is reasonable. No coil whine. The A750 has no LEDs lighting except the Intel ARC logo.

The A750 has a moderate price, especially if we compare it with recent NVIDIA RTX 40 Series… The MSRP (Manufacturer’s Suggested Retail Price) is USD $289 and here in France, we can find it for more or less 380 EUR.

Full specifications of the Arc A750 are available HERE. Arc A750 and A770 homepage can be found HERE.

The bundle is like the Edition: limited!
You have the box, the Arc A750 LE and a welcome card. 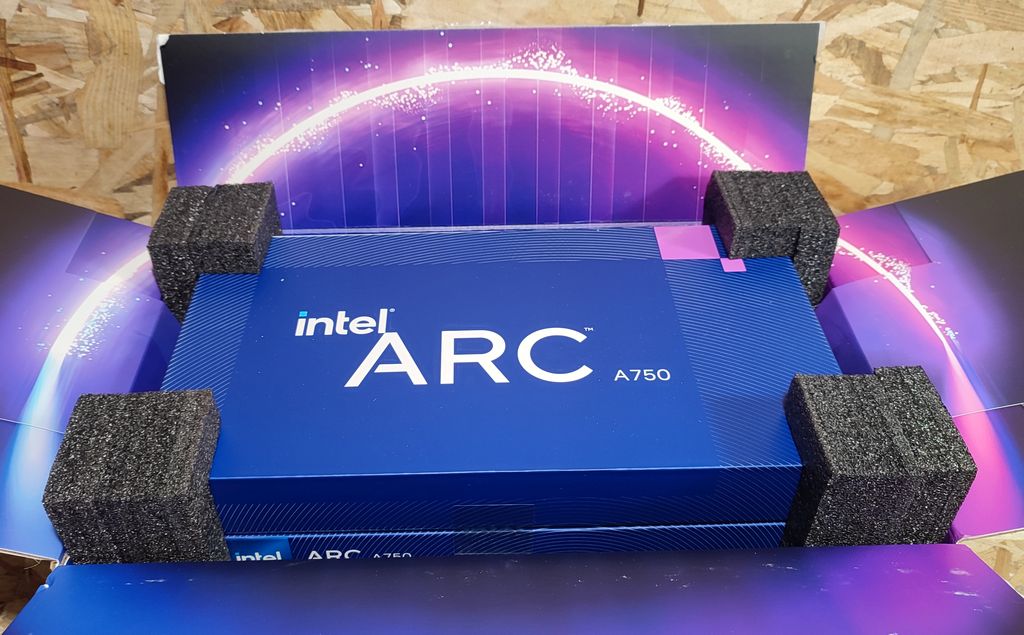 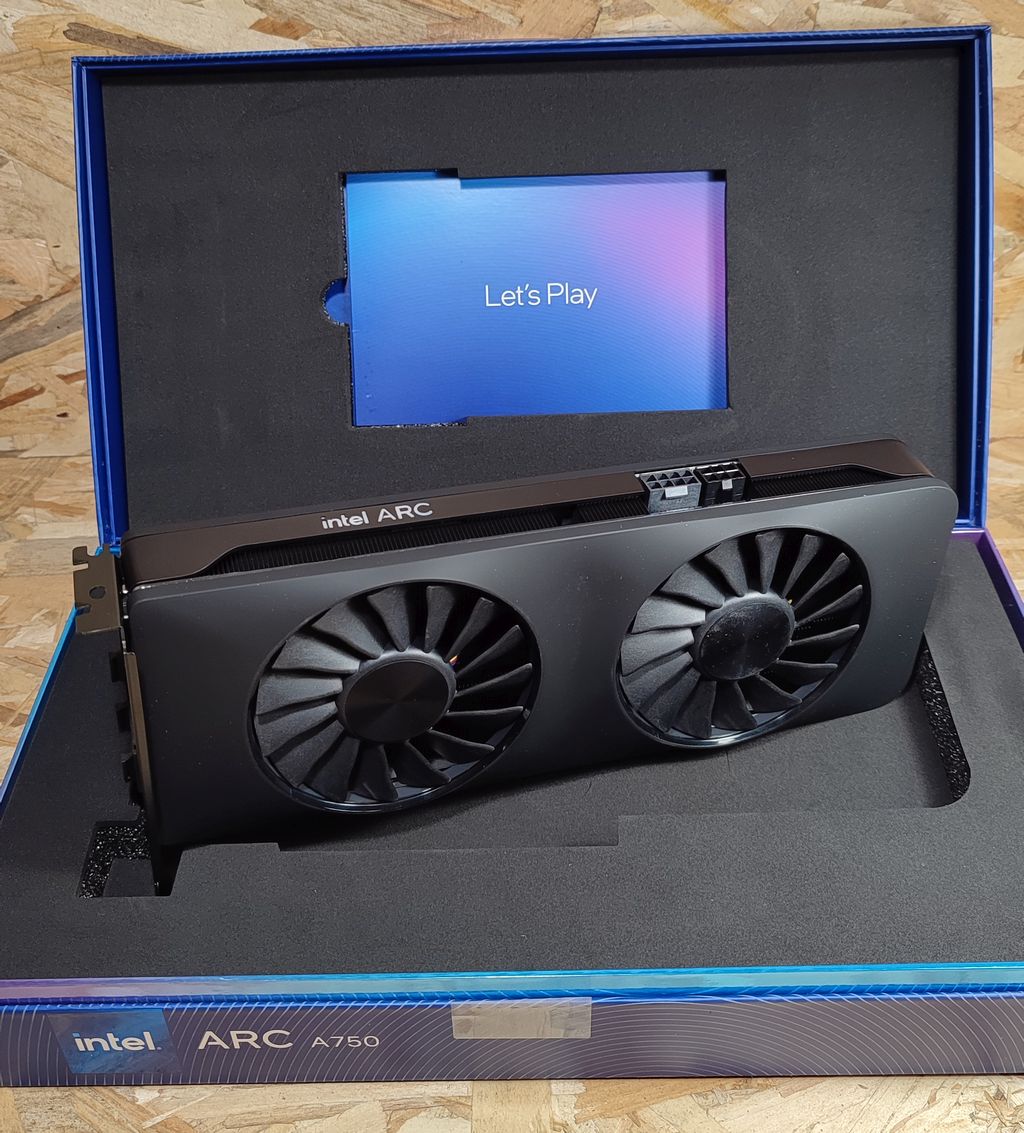 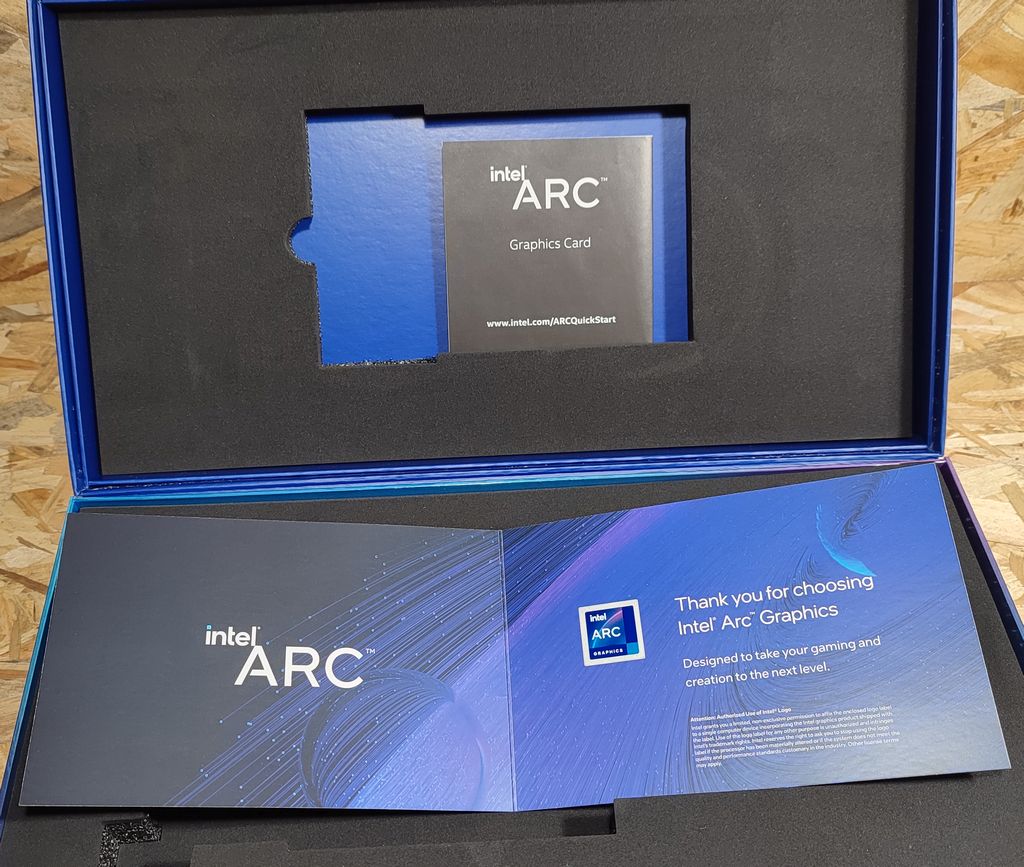 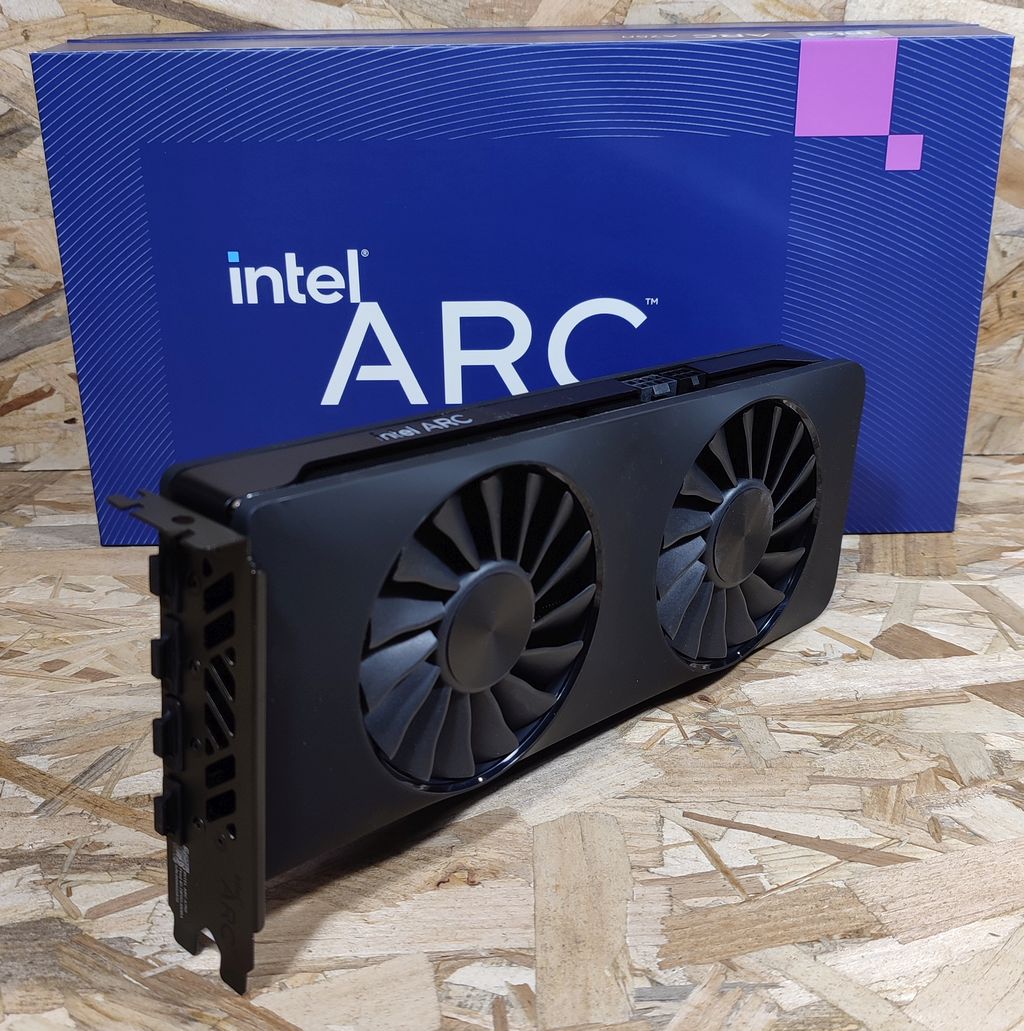 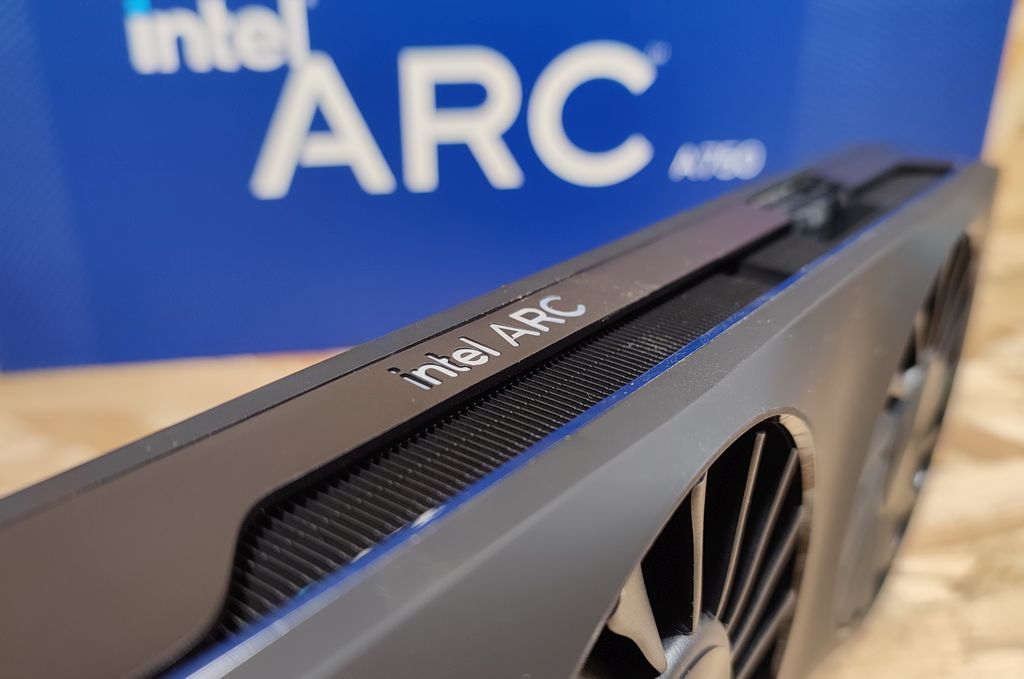 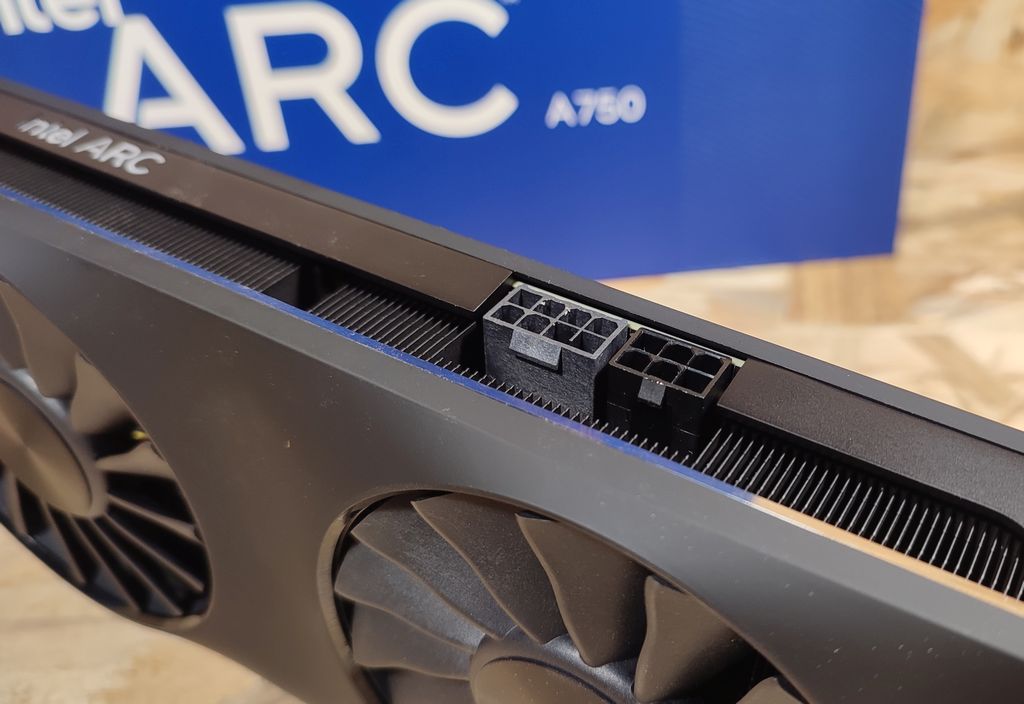 The rear side of the graphics card is covered by a plastic backplate. 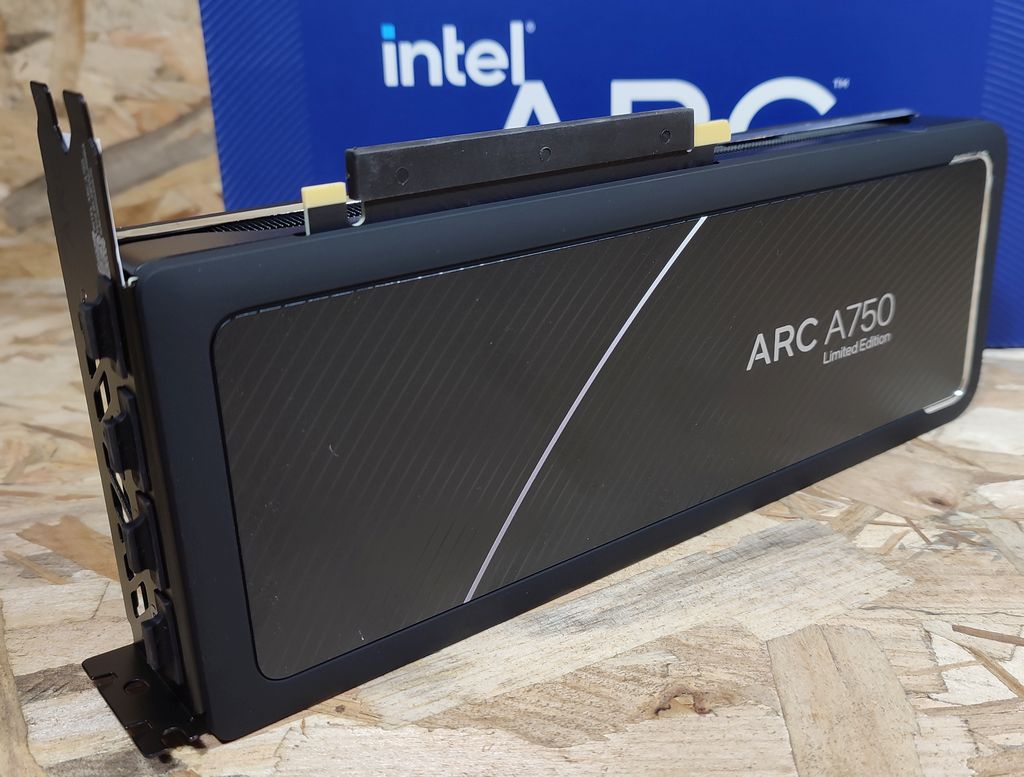 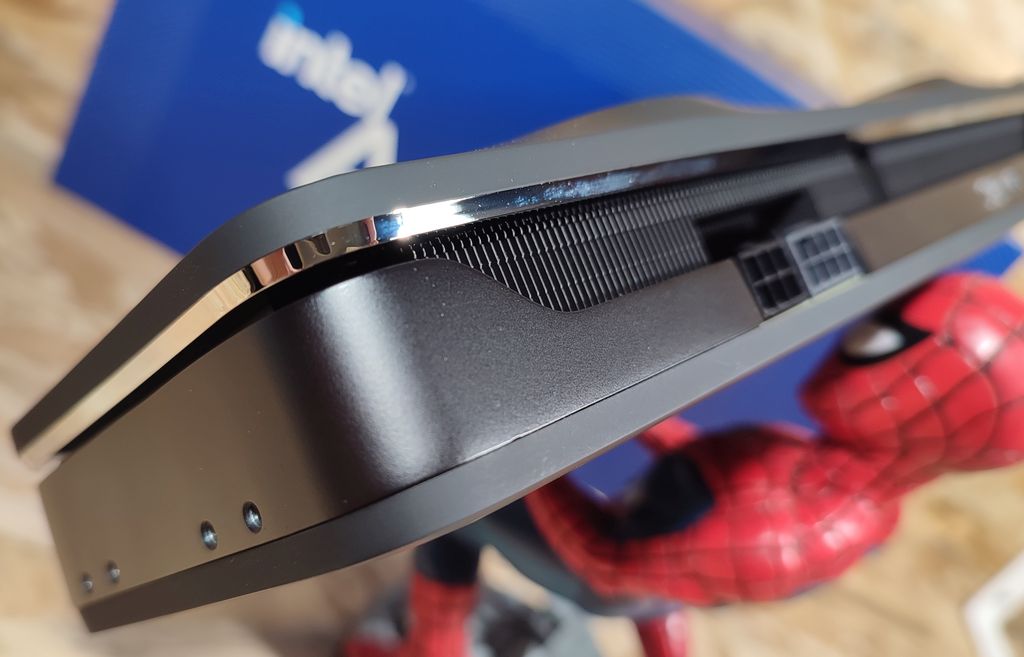 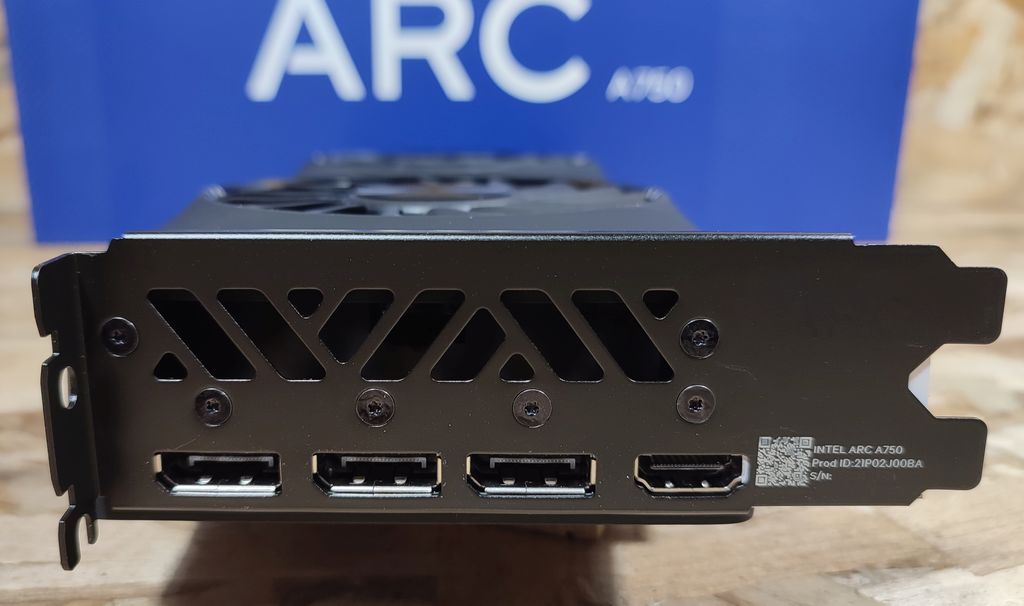 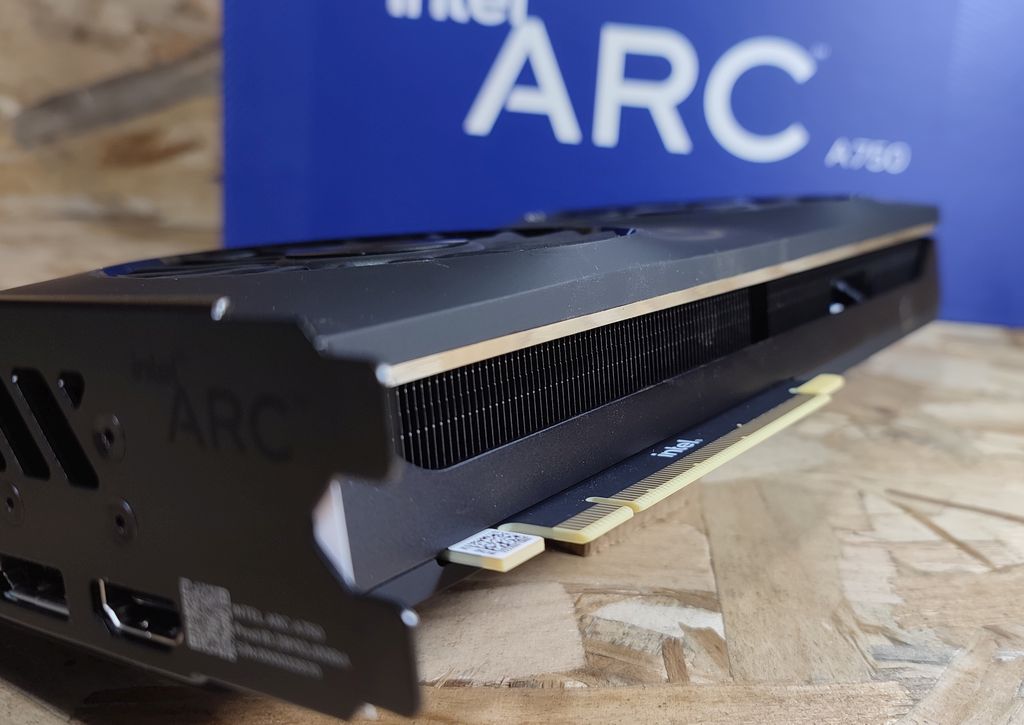 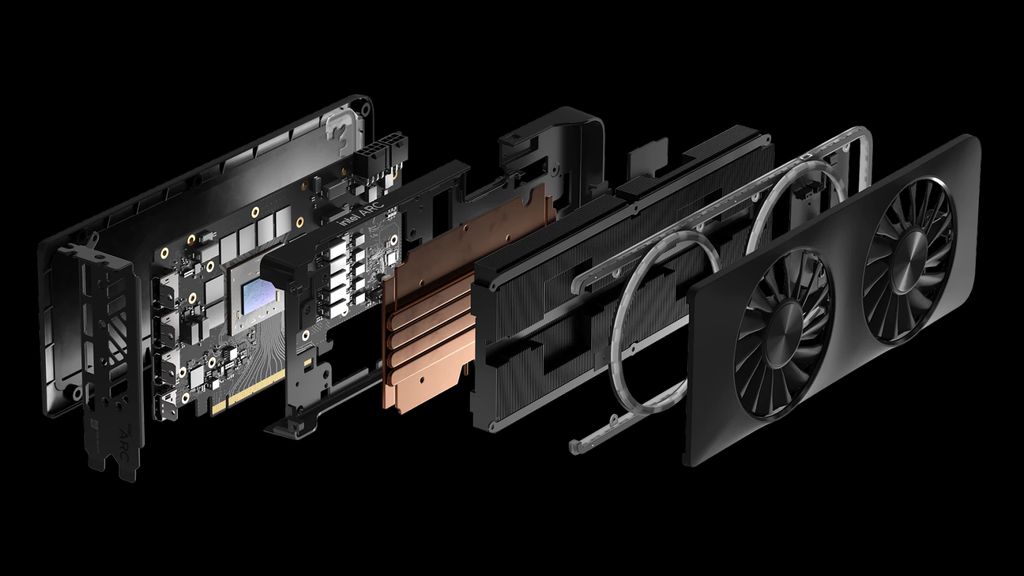 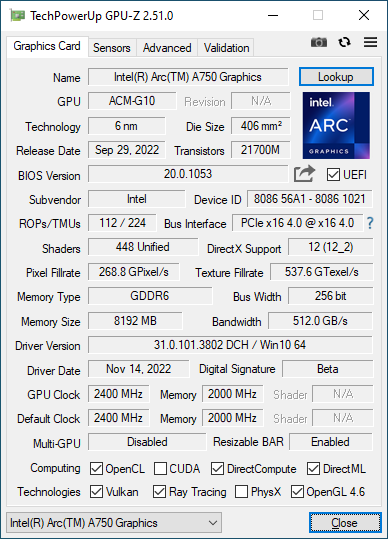 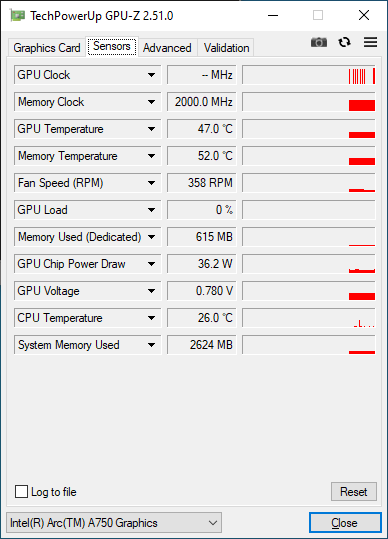 Fire Strike is a DirectX 11 benchmark for high-performance gaming PCs and overclocked systems. Fire Strike is very demanding, even for the latest graphics cards. If your frame rate is low, use Sky Diver instead.

The Physics test runs 32 parallel simulations of soft and rigid body physics on the CPU.

The Combined test includes tessellation, illumination, smoke simulation and particles and post-processing on the GPU, while the CPU is tasked with running 32 parallel physics simulations.

Firestrike has a global score and three sub-scores (graphics, physics and combined). For this test, I compare the graphics score only.

Same thing, I took the graphics score only.

Port Royal is a graphics card benchmark for testing real-time ray tracing performance. To run this test, you must have a graphics card and drivers that support Microsoft DirectX Raytracing.

Even if the Arc A380 is an entry level card, it has hardware raytracing units and then can run 3DMark Port Royal!

The DirectX Raytracing feature test measures pure ray-tracing performance. Use this test to compare the performance of dedicated ray-tracing hardware in the latest graphics cards.

In this feature test, there is a minimal amount of traditional rendering. The result of the test depends entirely on the ray-tracing performance of the graphics card.

Instead of using traditional rendering, the whole scene is ray-traced and drawn in one pass. Camera rays are traced across the field of view with small random offsets to simulate a depth of field effect. The frame rate is determined by the time taken to trace and shade a set number of samples for each
pixel (12 samples per pixel), combine the results with previous samples and present the output on the screen. The rendering resolution is 2560 × 1440. 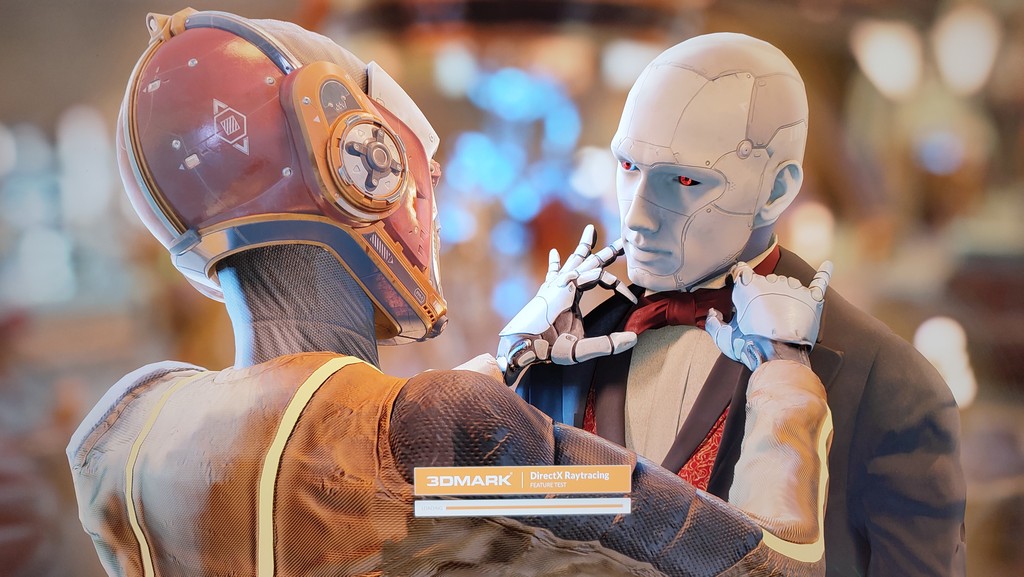 XeSS (Xe Super Sampling) is an Intel graphics technology that uses AI-enhanced upscaling to improve performance while maintaining high image fidelity. XeSS renders each frame at a lower resolution to boost performance and then uses AI upscaling to generate frames at the target output resolution. 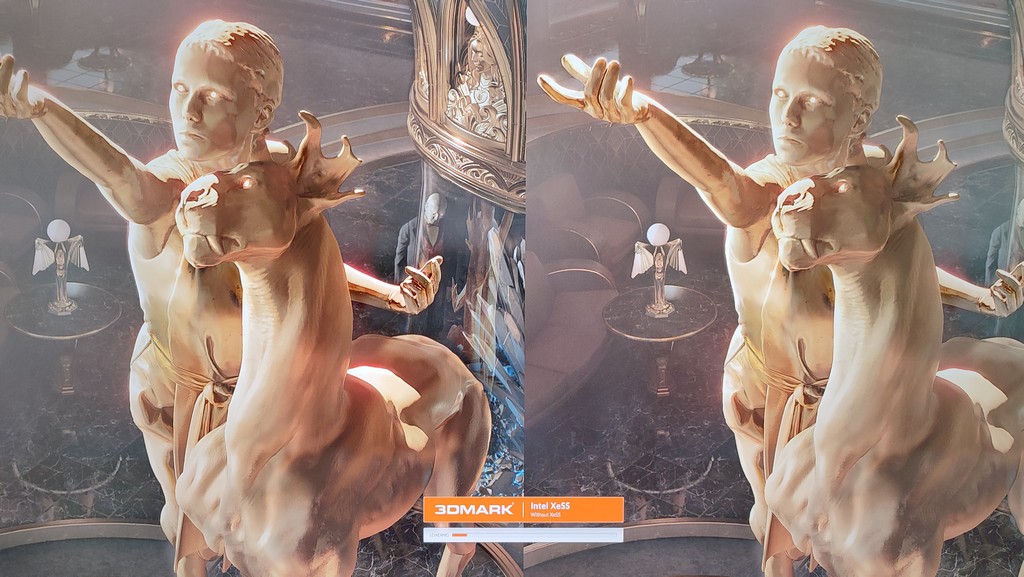 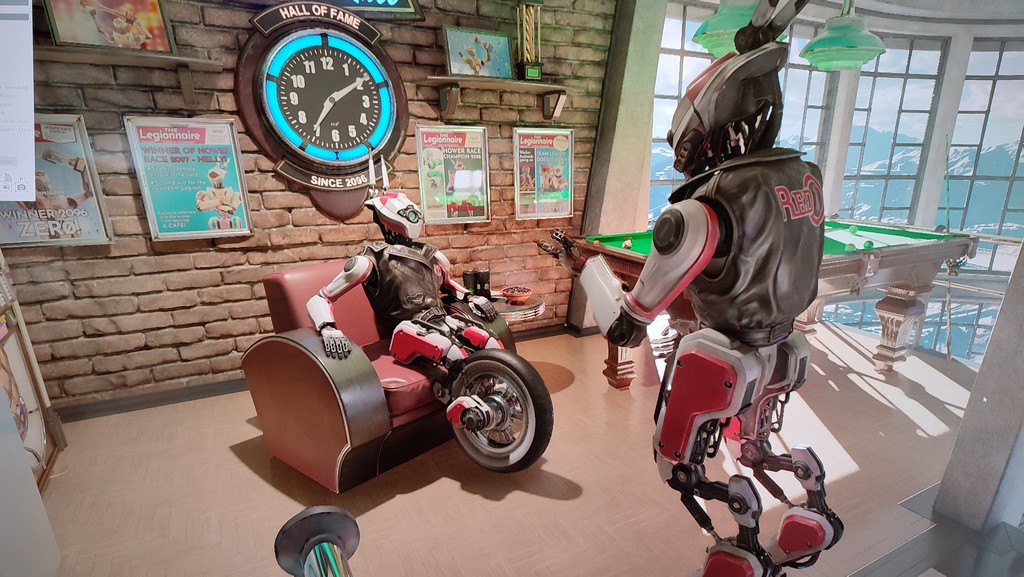 FurMark is a very intensive graphics benchmark and does not depend on the processing power of the CPU. So FurMark is a quick way to have an overview of the graphics performances of a GPU.

The burn-in test has been done with the new version of FurMark (that will be released shortly). This version of FurMark is 64-bit and uses OpenGL or Vulkan API. The FurMark Vulkan version produced best results (higher temperature and power consumption) with the Arc A750. 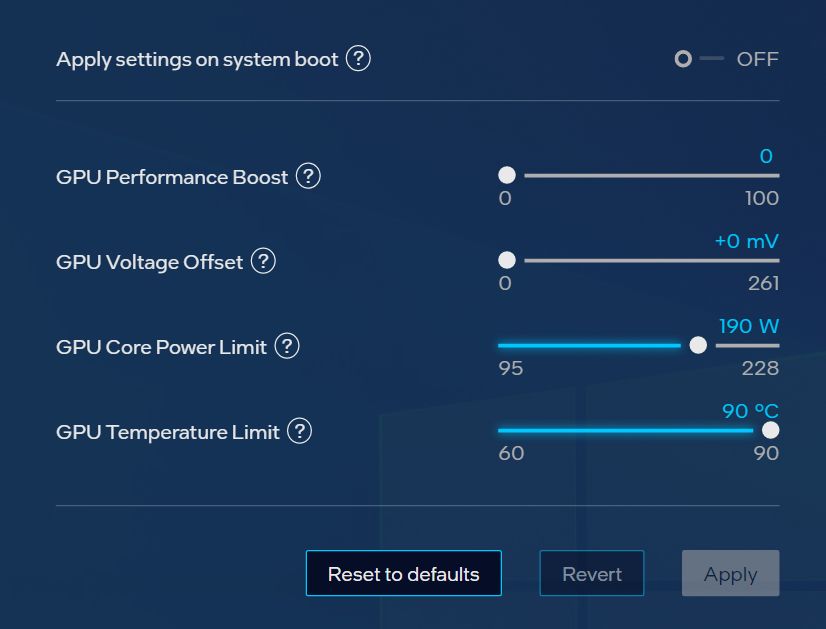 VGA cooler: under full graphics load, fans are audible but the noise is very limited and acceptable. In a closed case, the noise will be barely audible. 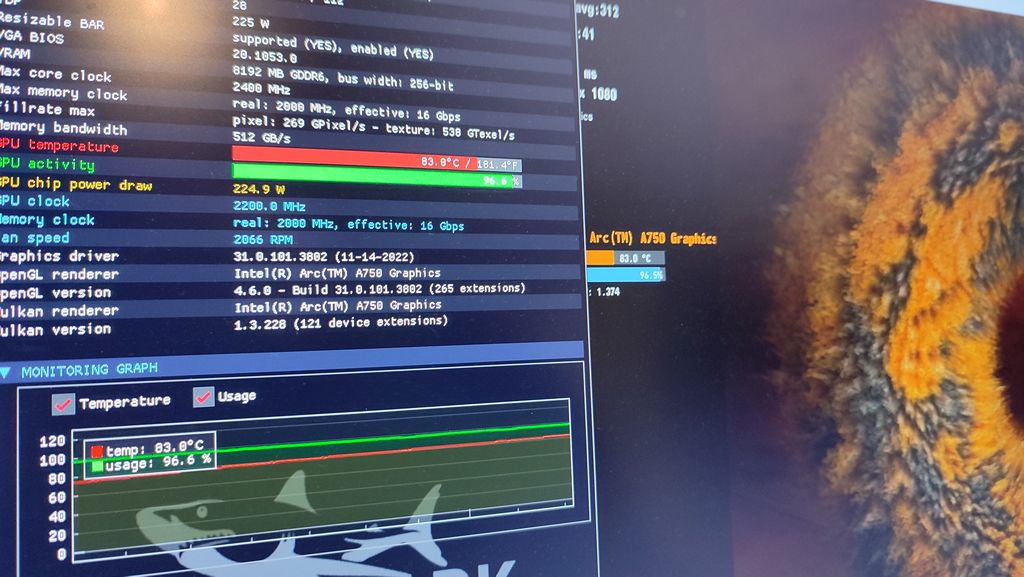 I also tested just for fun, my first ray tracing test. The demo works fine with the Arc A750 (this result is important because the ray tracing test is based on a 2-year old Vulkan code and A750
drivers seems to accept it). 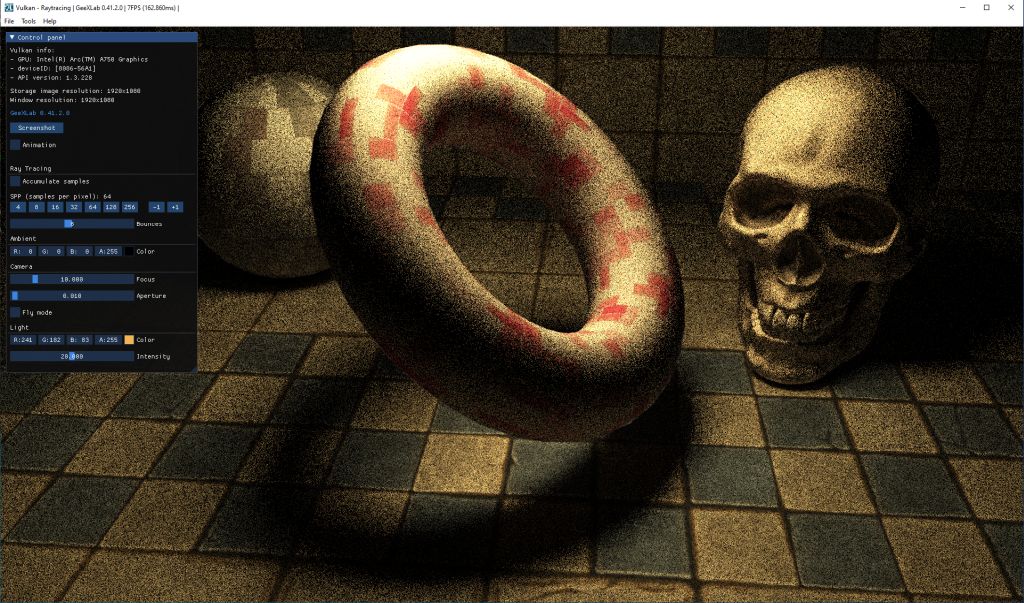 The Arc A750 is a mid range range card available at a reasonable price. Intel is a old actor in the integrated GPU world but is new in the realm of discrete graphics cards. That means the graphics drivers are not mature. I didn’t notice important bugs. 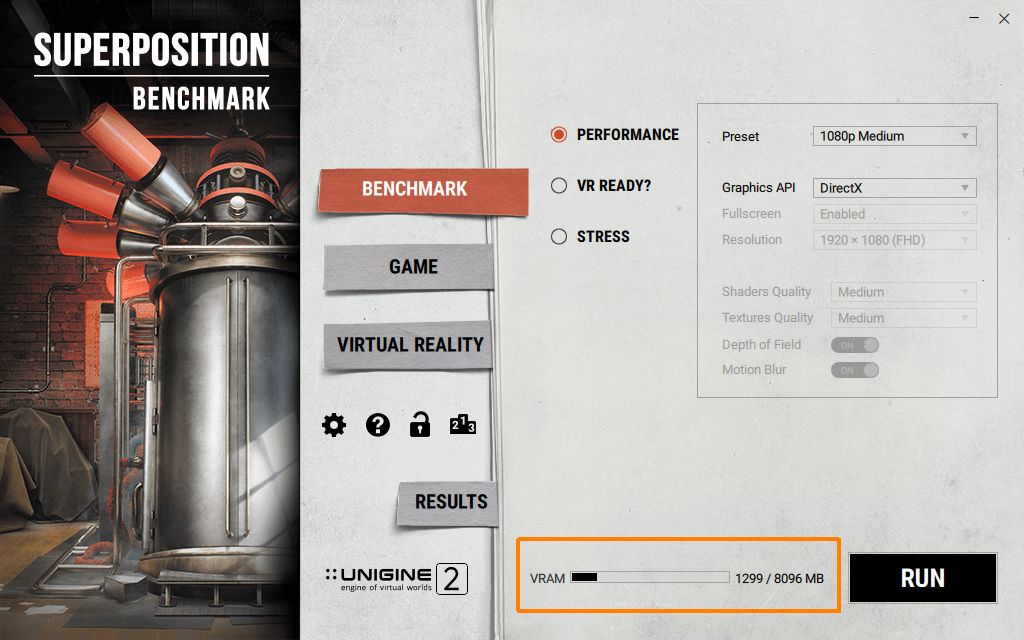 The only bug I saw is related to the VRAM amount in Unigine Superposition. The benchmark detected only 1024MB of VRAM for Arc A750: 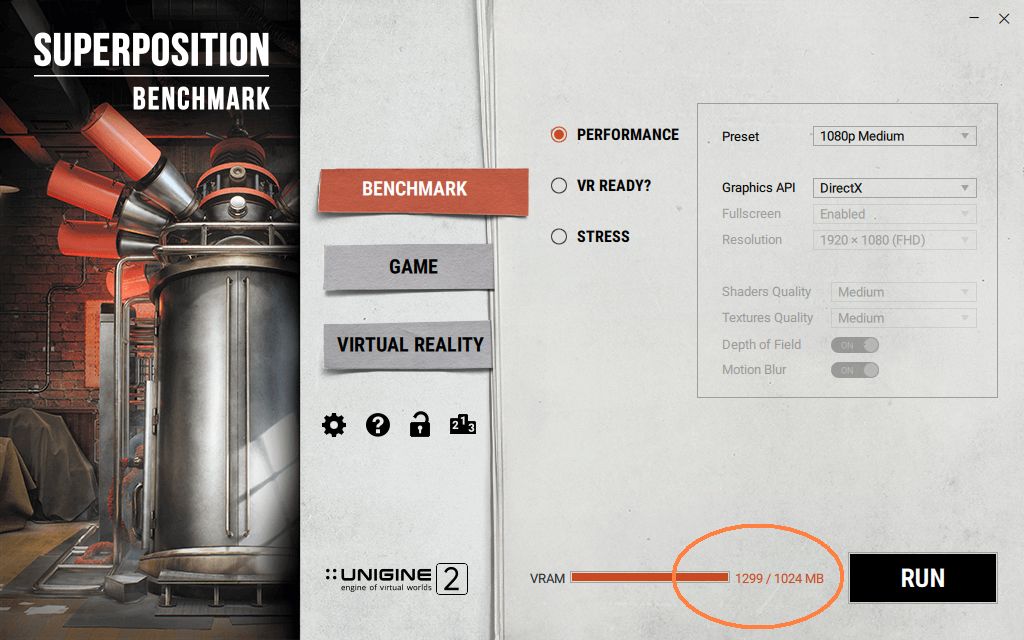 But the benchmark worked flawlessly.

The only issue for me is the GPU chip power draw at idle that is a bit important: more than 40W. If I look at my GeForce RTX 2070, the chip power draw is only 5W at idle. I hope its a driver bug, because 40W is important nowadays, especially if the system runs 10 hours or more a day. Even if I didn’t notice drivers bugs, there are bugs and unoptimized sections in current Arc drivers. It’s normal for a new driver! But it’s not a real problem, I’m sure that most of the issues will be fixed in the next updates of the graphics driver.

The Arc A380 is a entry level card. The Arc A750 is, this time, a serious graphics card. It offers good performances, supports recent 3D APIs including advanced features like hardware ray tracing and and is available at a correct price. The Arc A750 is a nice alternative to the GeForce RTX 3060 or 3060 Ti if you don’t need CUDA acceleration. 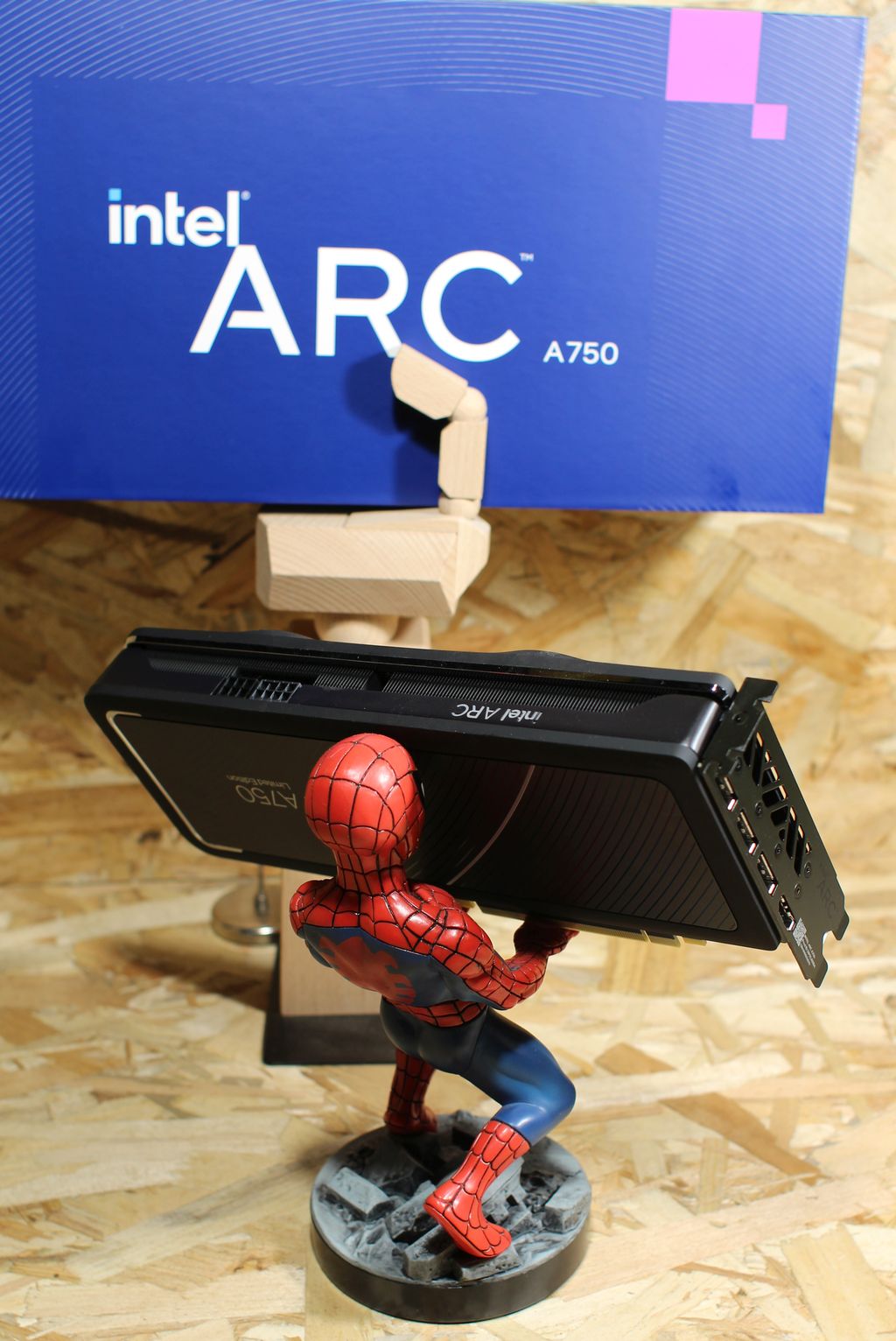 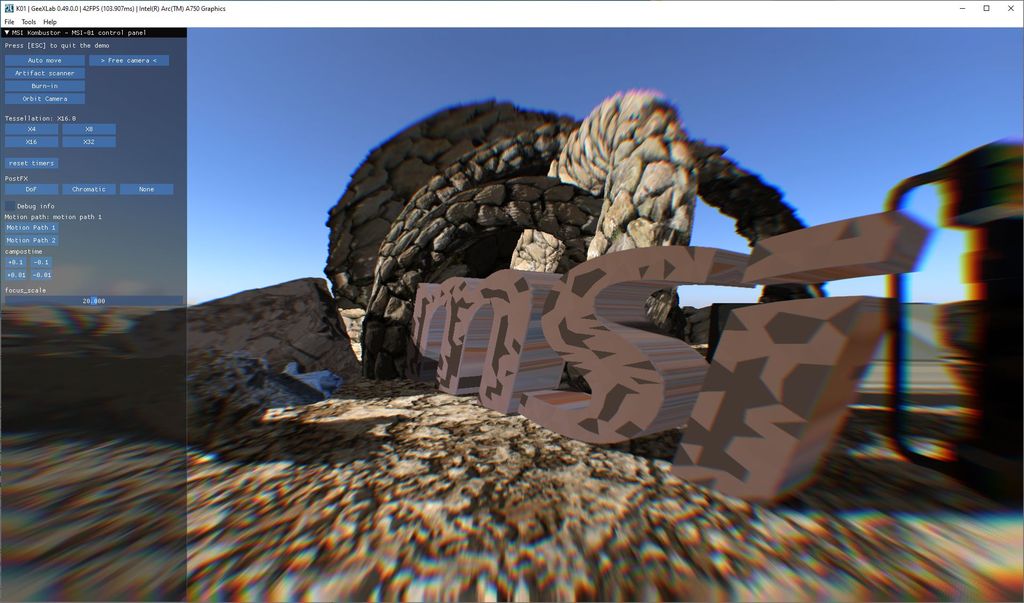 For reference, here is the right rendering (on GeForce or Radeon GPUs): 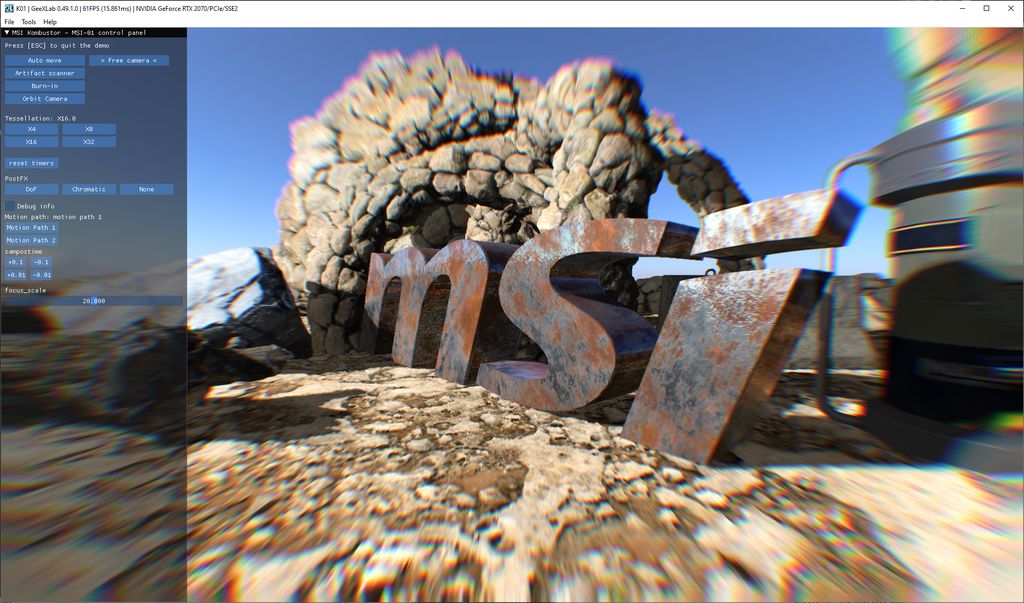 I hope Intel graphics driver team will fix this bug!