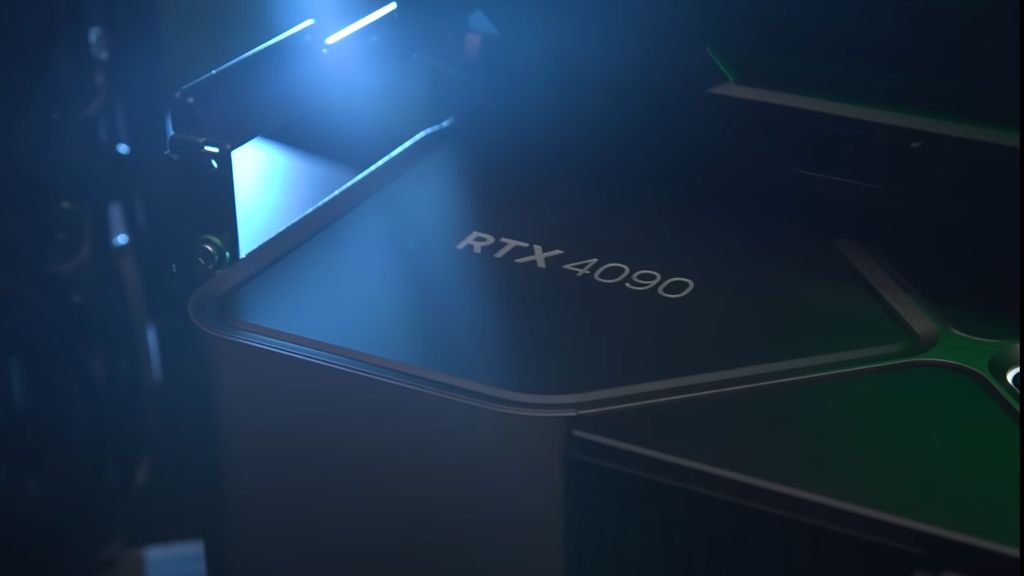 Some details about the specifications are available HERE.

NVIDIA today unveiled the GeForce RTX® 40 Series of GPUs, designed to deliver revolutionary performance for gamers and creators, led by its new flagship, the RTX 4090 GPU, with up to 4x the performance of its predecessor.

The world’s first GPUs based on the new NVIDIA® Ada Lovelace architecture, the RTX 40 Series delivers massive generational leaps in performance and efficiency, and represents a new era of real-time ray tracing and neural rendering, which uses AI to generate pixels.

“The age of RTX ray tracing and neural rendering is in full steam, and our new Ada Lovelace architecture takes it to the next level,” said Jensen Huang, NVIDIA’s founder and CEO, at the GeForce® Beyond: Special Broadcast at GTC.

“Ada provides a quantum leap for gamers and paves the way for creators of fully simulated worlds. With up to 4x the performance of the previous generation, Ada is setting a new standard for the industry,” he said.

The technology is coming to the world’s most popular game engines, such as Unity and Unreal Engine, and has received support from many of the world’s leading game developers, with more than 35 games and apps coming soon.

Additionally, the RTX 40 Series GPUs feature a range of new technological innovations, including:

– Streaming multiprocessors with up to 83 teraflops of shader power — 2x over the previous generation.

– Third-generation RT Cores with up to 191 effective ray-tracing teraflops — 2.8x over the previous generation.

– Fourth-generation Tensor Cores with up to 1.32 Tensor petaflops — 5x over the previous generation using FP8 acceleration.

– Shader Execution Reordering (SER) that improves execution efficiency by rescheduling shading workloads on the fly to better utilize the GPU’s resources. As significant an innovation as out-of-order execution was for CPUs, SER improves ray-tracing performance up to 3x and in-game frame rates by up to 25%.

– Architectural improvements tightly coupled with custom TSMC 4N process technology results in an up to 2x leap in power efficiency.

– Dual NVIDIA Encoders (NVENC) cut export times by up to half and feature AV1 support. The NVENC AV1 encode is being adopted by OBS, Blackmagic Design DaVinci Resolve, Discord and more.

New Ray-Tracing Tech for Even More Immersive Games
For decades, rendering ray-traced scenes with physically correct lighting in real time has been considered the holy grail of graphics. At the same time, geometric complexity of environments and objects has continued to increase as 3D games and graphics strive to provide the most accurate representations of the real world.

The new third-generation RT Cores have been enhanced to deliver 2x faster ray-triangle intersection testing and include two important new hardware units. An Opacity Micromap Engine speeds up ray tracing of alpha-test geometry by a factor of 2x, and a Micro-Mesh Engine generates micro-meshes on the fly to generate additional geometry. The Micro-Mesh Engine provides the benefits of increased geometric complexity without the traditional performance and storage costs of complex geometries.

Portal Is RTX ON!
RTX Remix has been used by NVIDIA Lightspeed Studios to reimagine Valve’s iconic video game Portal, regarded as one of the best video games of all time. Advanced graphics features such as full ray tracing and DLSS 3 give the game a striking new look and feel. Portal with RTX will be released as free, official downloadable content for the classic platformer with RTX graphics in November, just in time for Portal’s 15th anniversary.

The GeForce RTX 4090 and 4080: The New Ultimate GPUs
The RTX 4090 is the world’s fastest gaming GPU with astonishing power, acoustics and temperature characteristics. In full ray-traced games, the RTX 4090 with DLSS 3 is up to 4x faster compared to last generation’s RTX 3090 Ti with DLSS 2. It is also up to 2x faster in today’s games while maintaining the same 450W power consumption. It features 76 billion transistors, 16,384 CUDA® cores and 24GB of high-speed Micron GDDR6X memory, and consistently delivers over 100 frames per second at 4K-resolution gaming. The RTX 4090 will be available on Wednesday, Oct. 12, starting at $1,599.

Both RTX 4080 configurations will be available in November, with prices starting at $1,199 and $899, respectively.

Where to Buy
The GeForce RTX 4090 and 4080 GPUs will be available as custom boards, including stock-clocked and factory-overclocked models, from top add-in card providers such as ASUS, Colorful, Gainward, Galaxy, GIGABYTE, Inno3D, MSI, Palit, PNY and Zotac.

The RTX 4090 and RTX 4080 (16GB) are also produced directly by NVIDIA in limited Founders Editions for fans wanting the NVIDIA in-house design.

More details are available on THIS PAGE:

Ada is incredibly efficient, with over twice the performance at the same power compared to Ampere, and excellent scalability and overclockability as power is increased. 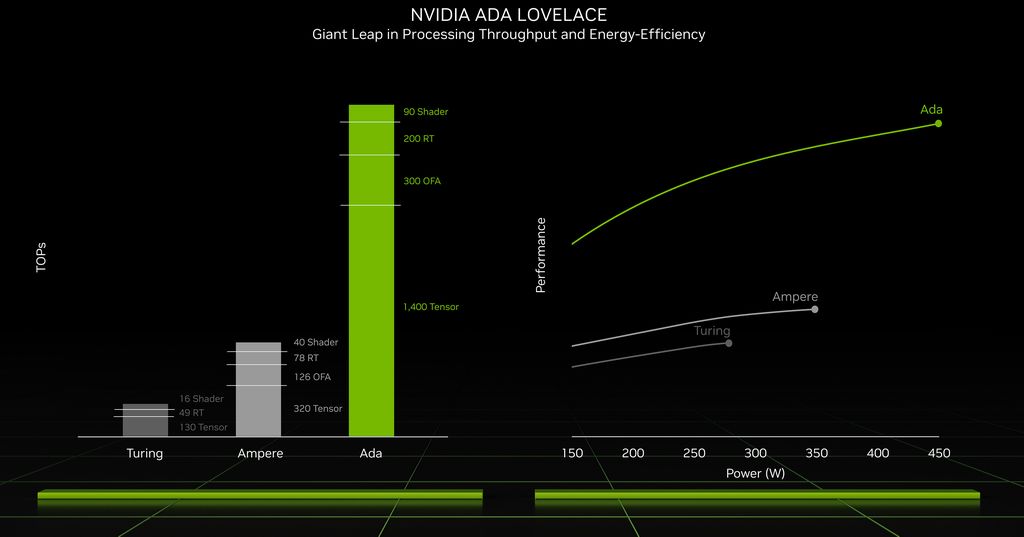 Shader Execution Reordering
GPU architecture is highly parallelized and at its most efficient when executing similar workloads at the same time. However, advanced ray tracing requires computing the impact of millions of rays striking numerous different material types throughout a scene, creating a sequence of divergent, inefficient workloads for shaders (shaders calculate the appropriate levels of light, darkness, and color during the rendering of a 3D scene, and are used in every modern game).

Our new Shader Execution Reordering (SER) technology dynamically reorganizes these previously-inefficient workloads into considerably more efficient ones, improving shader performance by up to 2X, and in-game frame rates by up to 25%! 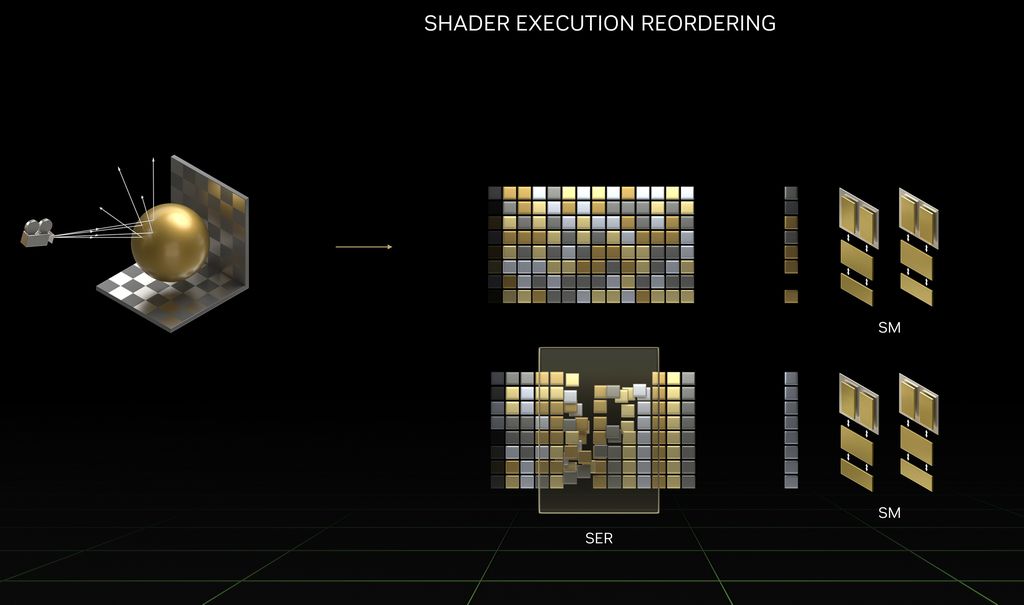 Marvel at the beautiful world of Justice enhanced with a new path-traced upgrade with the launch of Fuyun Court, a new location that all players can access from October 12th when the next Justice game update is released.

Enjoy this cinematic teaser for Racer RTX, built in NVIDIA Omniverse and powered by the #BeyondFast GeForce RTX 40 Series. 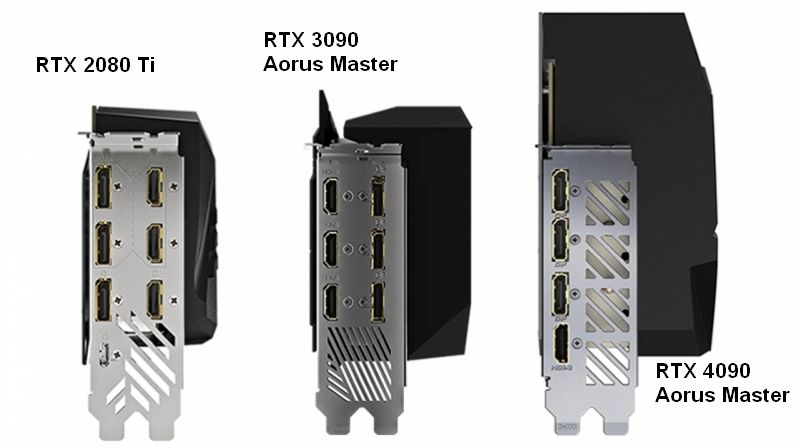 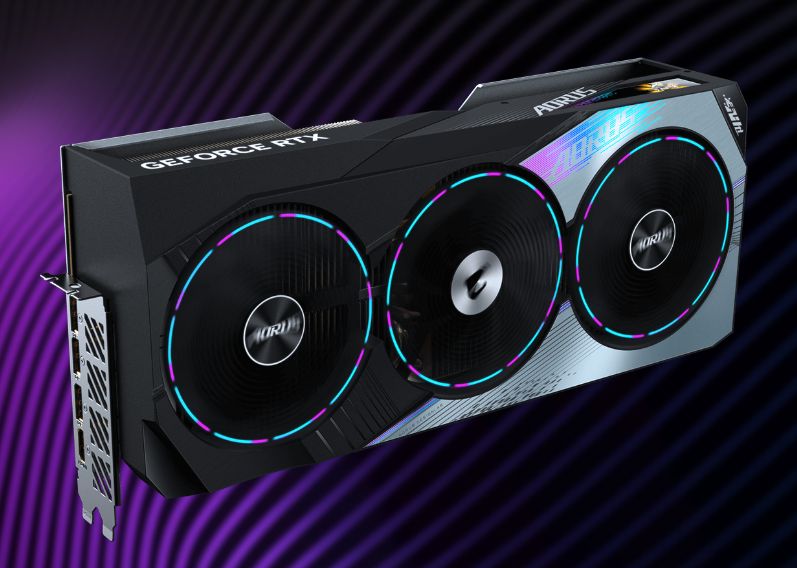 The difference in specifications is important between RTX 4080 16GB and RTX 4080 12GB. The RTX 4080 16GB has more transistors, more cores, more ROPs, more memory. At the end it’s a different graphics card, so why both cards have the same name? The 16GB version should have called RTX 4080 Ti or something like that. Or a correct name for the RTX 4080 12GB would have been RTX 4070. Incoherent!

In this article, NVIDIA explains the name of the RTX 4080:

The 4080 12GB is an incredible GPU, with performance exceeding our previous generation flagship, the RTX 3090 Ti and 3x the performance of RTX 3080 Ti with support for DLSS 3, so we believe it’s a great 80-class GPU. We know many gamers may want a premium option so the RTX 4080 16GB comes with more memory and even more performance. The two versions will be clearly identified on packaging, product details, and retail so gamers and creators can easily choose the best GPU for themselves.

The diagram of a SM: 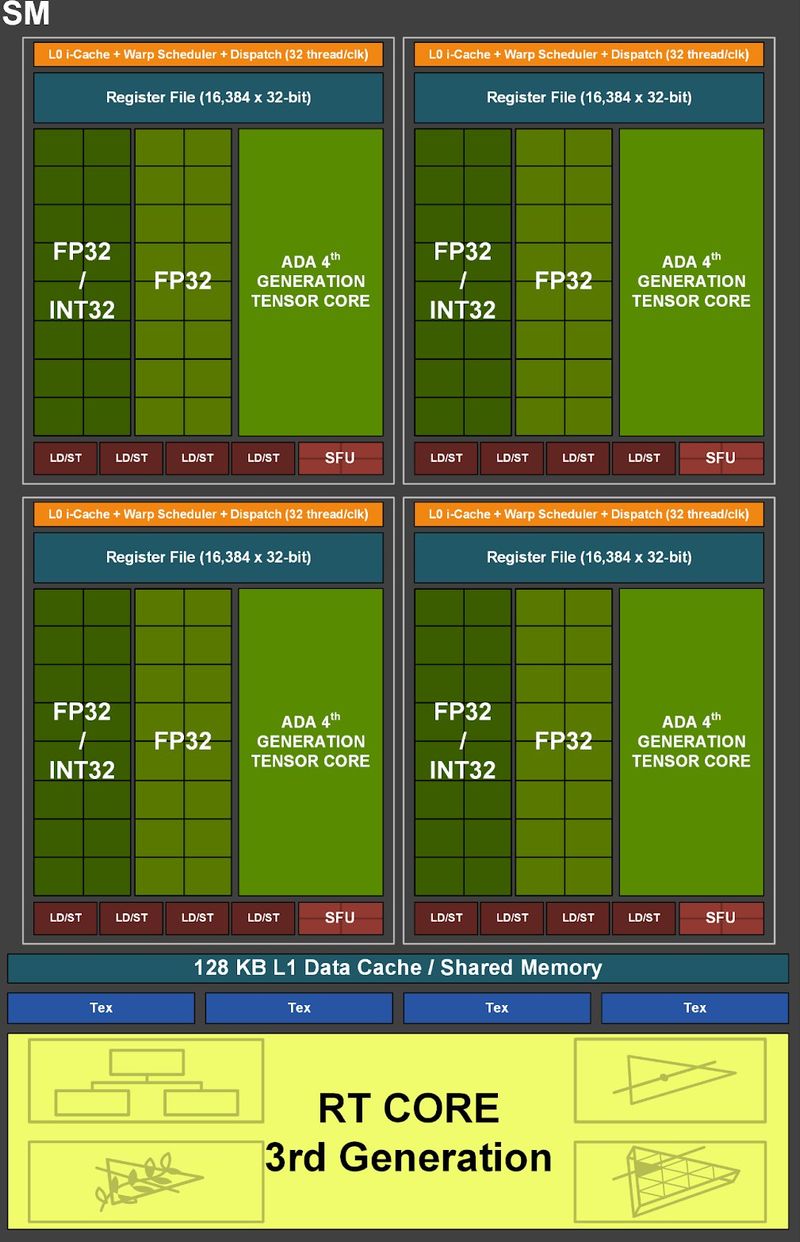 NVIDIA has published a whitepaper that describes in depth the architecture of the AD102 GPU:
NVIDIA ADA GPU ARCHITECTURE (40-page PDF)

The GeForce RTX 4090 about about to be launched and some stress tests are popping up here and there. The latest stress test, done with our venerable MSI Kombustor, shows a power consumption that reaches 425W on the MSI-01 graphics test:

This test is less violent than FurMark and tries to reach the graphics workload of a real game.

This second stress test is a variant of FurMark that uses larger textures and a lot of VRAM.

Reviews of the GeForce RTX 4090 Founders Edition are available.

Power consumption of the RTX 4090 FE: 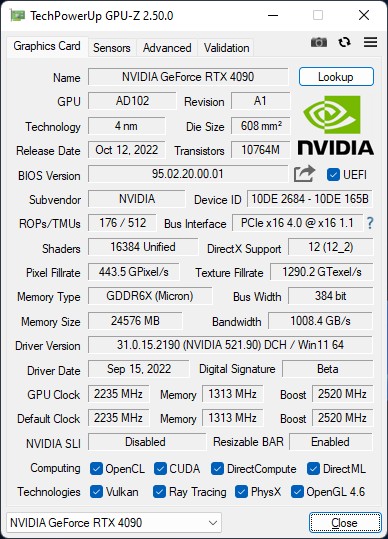 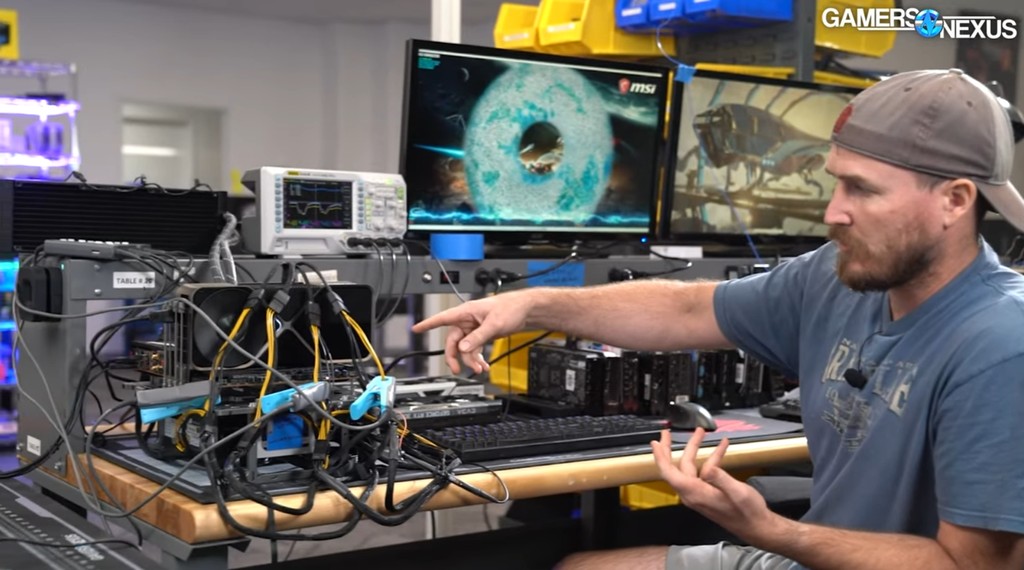 Is the fastest GPU ALWAYS the best?

Reviews of the GeForce RTX 4080 are available.

Power consumption of the RTX 4080 FE: 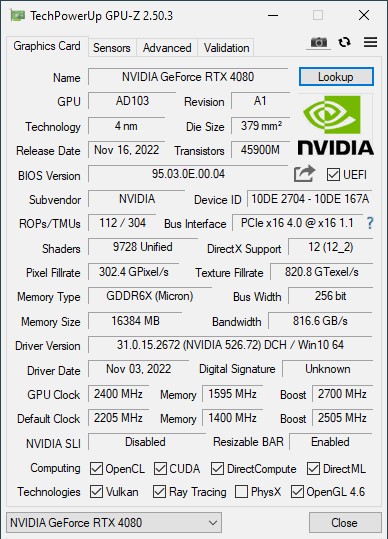 We Found One Good Thing About the GeForce RTX 4080…