This illustration from NVIDIA shows the mesh shading pipeline versus regular VTG pipeline:

In few words, a mesh shader program can be seen as the association of a compute-like shader and a fragment shader. Why compute-like shader? Because like compute shaders, you can set the number of threads for work groups or use synchronization functions like barrier(). Mesh shaders are computing-like shaders specialized in graphics tasks.

Mesh shaders are available in OpenGL, Vulkan and DirectX 12 Ultimate (dx12 won’t be covered in this article).

The nice thing is that the mesh shader has no defined inputs. You can for example generate primitives ex-nihilo, in that case, there is no input, the primitives are generated procedurally (a primitive can be a point, a line or a triangle). But if you want the mesh shader to work on existing data, GPU buffers (uniform, storage) or textures are the way to pass data to the mesh shader.

Adding a basic mesh shaders support to an existing engine is simple. All you need is to add the new shader stages (OpenGL: GL_MESH_SHADER_NV and GL_TASK_SHADER_NV used with glCreateShader – Vulkan: VK_SHADER_STAGE_MESH_BIT_NV and VK_SHADER_STAGE_TASK_BIT_NV used in VkPipelineShaderStageCreateInfo) and a function to launch the execution of mesh shaders (glDrawMeshTasksNV in OpenGL, vkCmdDrawMeshTasksNV in Vulkan). 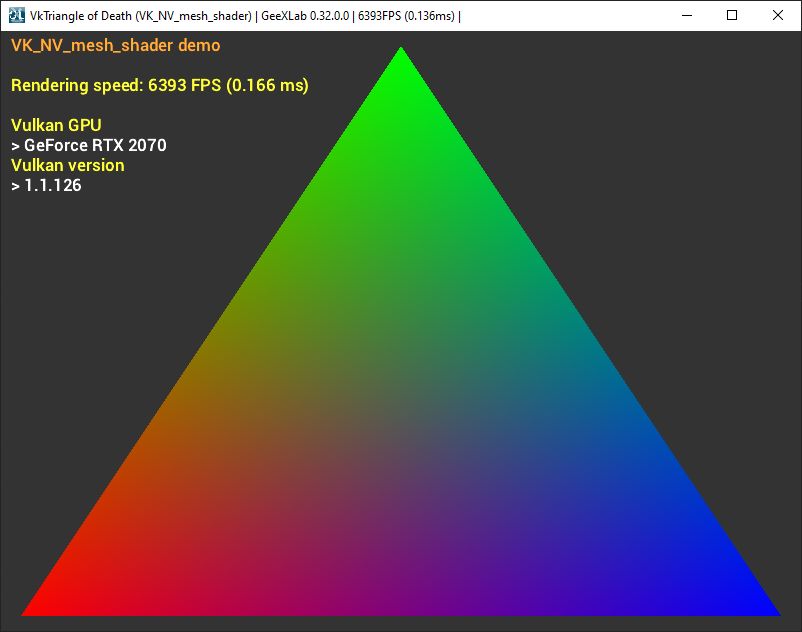 In Vulkan, you have to read the following members of the VkPhysicalDeviceMeshShaderPropertiesNV structure:
– maxMeshOutputVertices
– maxMeshOutputPrimitives

Here is the dump of the entire VkPhysicalDeviceMeshShaderPropertiesNV structure for my GeForce RTX 2070 + latest R445.98:

Too bad that the parameters are not in the same order in OpenGL and Vulkan!

In the previous mesh shader, one thread per work group has been set:

We can set more threads per work group, the maximum number of threads being 32 (32 is the size of a WARP on NVIDIA GPUs – more about WARP can be found in this article). This value comes from the reading of the first component of maxDrawMeshTasksCount (Vulkan) or GL_MAX_MESH_WORK_GROUP_SIZE_NV (OpenGL).

For the triangle, we can set the number of threads to 3 (one thread per vertex). In that case the mesh shader can be re-written in a more compact way:

When primitive mode is set to triangle, the output of a mesh shader is always a small mesh, called a meshlet. The triangle is the smallest meshlet.

With these limitations (max output vertices and max output primitives), how can we process/render an existing big mesh with a mesh shader?

A way to render an existing mesh with a mesh shader is to decompose the mesh into multiple meshlets, each meshlet being processed by a work group.

Here is a more detailed definition of a meshlet (source):

What exactly is a Meshlet?
A meshlet is a subset of a mesh created through an intentional partition of the geometry. Meshlets should be somewhere in the range of 32 to around 200 vertices, depending on the number of attributes, and will have as many shared vertices as possible to allow for vertex re-use during rendering. This partitioning will be pre-computed and stored with the geometry to avoid computation at runtime, unlike the current Input Assembler which must attempt to dynamically identify vertex reuse every time a mesh is drawn. Titles can convert meshlets into regular index buffers for vertex shader fallback if a device does not support Mesh Shaders.

Here is a simple technique for creating meshlets from a single mesh (source):

So, a quite viable strategy for creating meshlets is: just scan the index buffer linearly, accumulating the set of vertices used, until you hit either 64 vertices or 126 triangles; reset and repeat until you’ve gone through the whole mesh. This could be done at art build time, or it’s simple enough that you could even do it in the engine at level load time.

A possible structure for a meshlet can be:

We recommend using up to 64 vertices and 126 primitives. The ‘6’ in 126 is not a typo. The first generation hardware allocates primitive indices in 128 byte granularity and and needs to reserve 4 bytes for the primitive count. Therefore 3 * 126 + 4 maximizes the fit into a 3 * 128 = 384 bytes block. Going beyond 126 triangles would allocate the next 128 bytes. 84 and 40 are other maxima that work well for triangles.

Here is a mesh shader that handles meshlets:

Each meshlet is rendered by a work group. Then if you have to render num_meshlets, the drawing could be:

The previous mesh shader comes from this Vulkan demo: 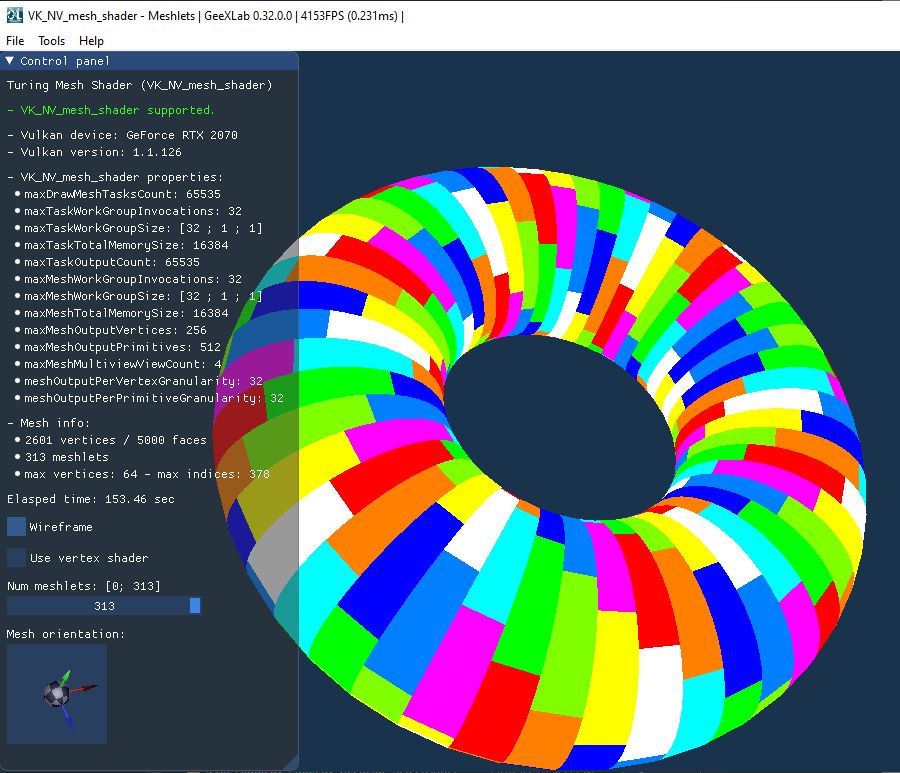 Turing GPUs are limited to 65535 mesh tasks count (OpenGL: GL_MAX_DRAW_MESH_TASKS_COUNT_NV – Vulkan: maxDrawMeshTasksCount). In his Framework 4, Humus has a way to render more than 65535 meshlets:

If you have other links on mesh shaders, post them in comments, I will update this list of references.