Looks like upcoming Radeon RX 5700 graphics cards do not leave the creator of GeForce GPUs indifferent, because NVIDIA has reacted by publishing this slide showing the power consumption of some GeForce vs Radeon cards: 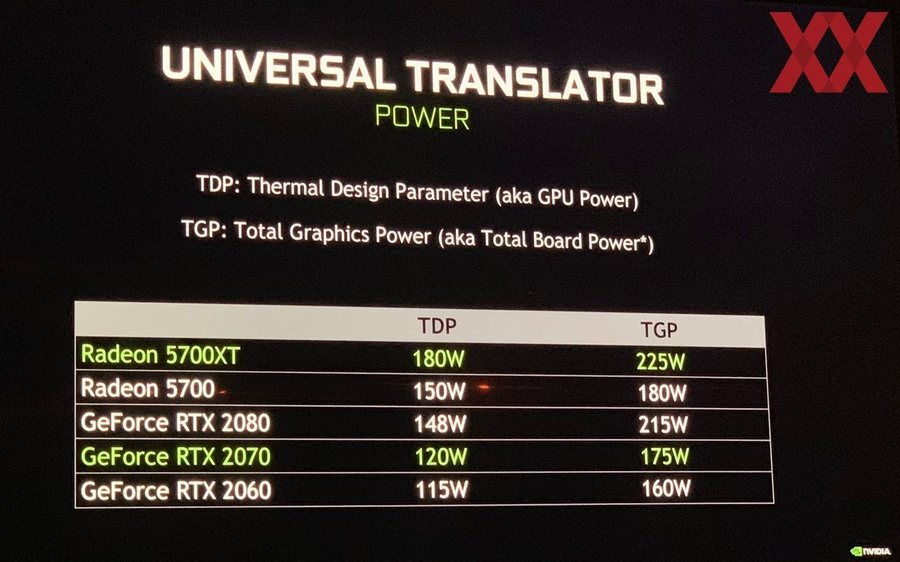 Power consumption is a term a bit vague because NVIDIA uses acronyms like TDP (widely used in the world of graphics cards) and TGP to talk about the power required by the graphics card.

The TDP is the maximum amount of heat generated by the graphics card that a cooling system has to dissipate (the power is dissipated in the form of heat) under normal conditions (?). For example, a TDP of 100W means the VGA cooler must be designed to dissipate heat equivalent to 100W. The TDP does not reflect the total power consumption of a graphics card.

The definition of the TGP from Quadro-Power-Guidelines.pdf:

The TGP (total graphics power) represents the maximum amount of graphics board power that the system power supply should be able to provide to the graphics card.

NVIDIA also uses the term Max Power Consumption (MPC) in the specifications of some cards like Quadro RTX. The MPC is not equal to the TGP as we can see in one of NVIDIA’s papers (Quadro-Power-Guidelines.pdf). For example, the TGP of the Quadro RTX 5000 is 230W (in the pdf paper) while the MPC is 265W (on the website). But there is no mention of the GPU power (TDP) of the RTX 5000… I think the MPC is max power consumption supported by the graphics board without damaging it while the TGP/TBP is the max electrical power consumption of the whole graphics card under load (still under normal conditions). And for sizing / security reasons, MPC > TGP. 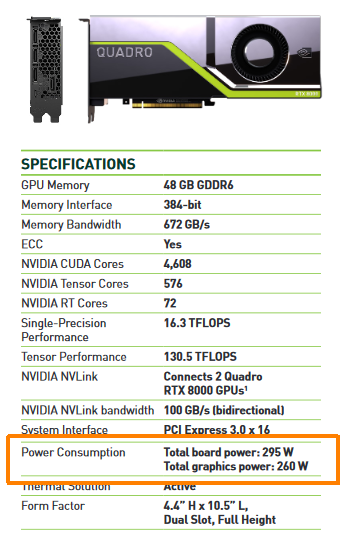 On this page (updated yesterday…) the power consumption of GeForce and Quadro cards is referenced by TBP (the total power of the board) but someone forgot to update the tooltip which still uses the term TDP to explain the TBP. Quel bordel!

The TDP is used in place of Total Board Power in the Turing architecture whitepaper:

Here is a table that tries to list the total board power consumption (TBP) and GPU power of some recent cards. I will update this table as soon as I get new values.

One thought on “Graphics Cards: TDP and TGP (and don’t forget TBP, GCP and MPC…)”