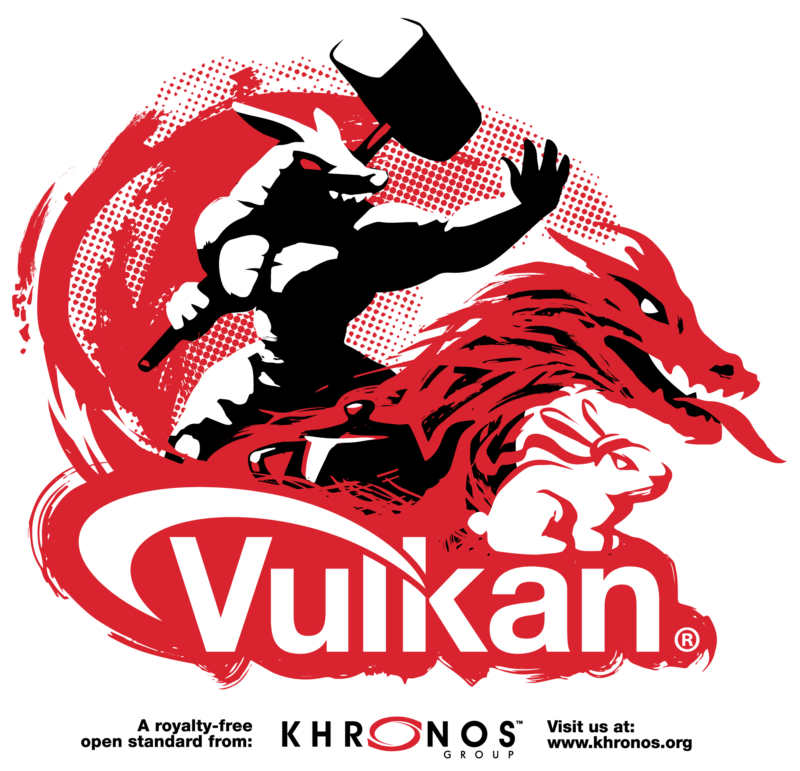 Two years after the first version, the Khronos Group has released the second big iteration of Vulkan specifications.

Vulkan 1.1 (the exact version is 1.1.70) adds the support of subgroup operations, protected memory and a new command to enumerate instance version (vkEnumerateInstanceVersion).

Many existing Vulkan extensions are now part of the Vulkan 1.1 core: 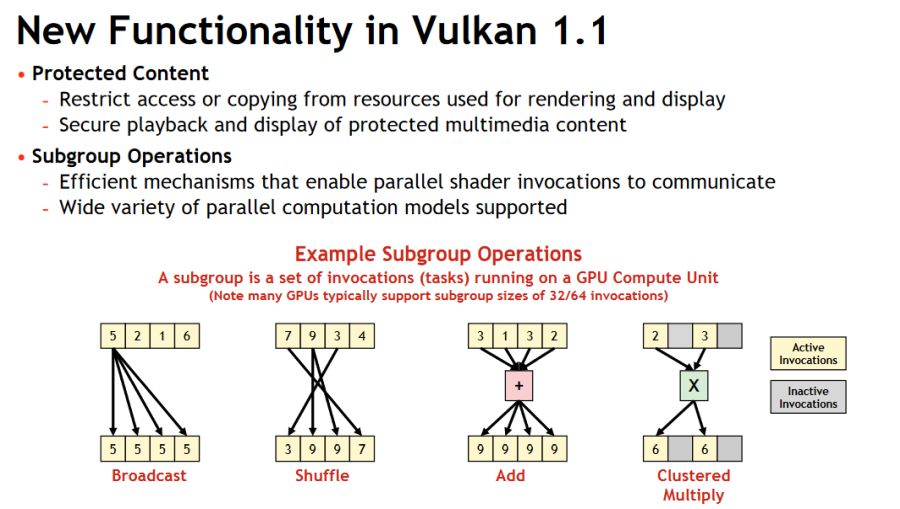 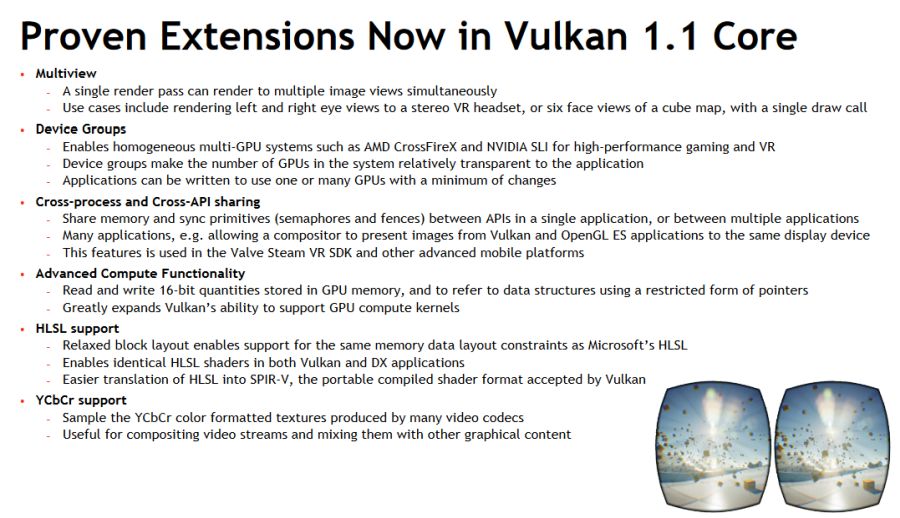 SPIR-V (cross-API intermediate language for natively representing parallel compute and graphics) has not been forgotten because the version 1.3 of the specifications has been released as well. SPIR-V intermediate language adds the support of subgroup operations and enables enhanced compiler optimizations. 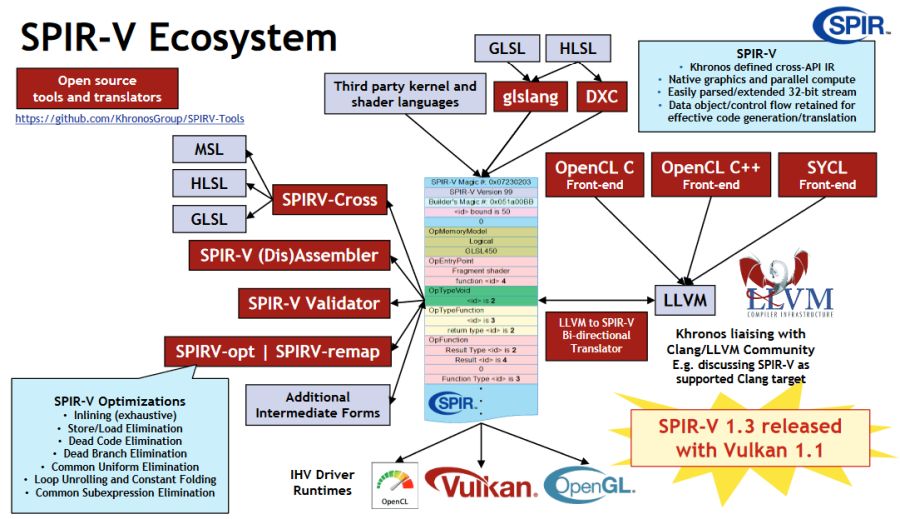 Alongside the release of Vulkan 1.1, a new Vulkan SDK has been released by LunarG and NVIDIA has published a new Vulkan driver that brings Vulkan 1.1 support.

“With enhanced developer tools, rigorous conformance testing and the public Vulkan Ecosystem Forum, Khronos is delivering on its goal to develop a complete and vibrant Vulkan ecosystem,” said Tom Olson, distinguished engineer at Arm, and Vulkan Working Group chair. “Vulkan 1.1 is a response to prioritized industry requests and shows our commitment to delivering a functional roadmap driven by developer needs.”

Vulkan 1.1 will drive increased industry momentum for this new-generation, cross-platform standard for explicit control over GPU acceleration. Vulkan now ships natively on almost all GPU-enabled platforms, including Windows 7, 8.X, 10, Android 7.0+ and Linux, plus Khronos recently announced open source tools to enable Vulkan 1.0 applications to be ported to macOS and iOS. Vulkan has widespread support in leading games engines including Unreal, Unity, Source 2 from Valve, id Tech, CroTeam’s Serious Engine, CryEngine, and Xenko. Vulkan is being used in over 30 cutting-edge games on diverse desktop and mobile platforms, including Doom, Quake, Roblox, The Talos Principle, Dota 2, and is the exclusive API used in AAA titles such as Wolfenstein II and Doom VFR.

New functionality in Vulkan 1.1 includes Subgroup Operations that enable highly-efficient sharing and manipulation of data between multiple tasks running in parallel on a GPU. Vulkan 1.1 also enables applications to perform rendering and display operations using resources that they cannot access or copy – for secure playback and display of protected multimedia content.

In addition, a wide range of Vulkan 1.0 extensions have been integrated, bringing significant proven functionality into core Vulkan 1.1, including: simultaneous rendering of multiple image views, use of multiple GPUs in a single system, and cross-process API interoperability for advanced rendering and compositing operations often used in demanding applications such as Virtual Reality. These core functionalities also include advanced compute with 16-bit memory access, and support for HLSL memory layouts, and display, processing and compositing of video streams, through direct sampling of YCbCr color formatted textures produced by many video codecs.

Integral to the release of Vulkan 1.1 is the new SPIR-V 1.3 specification that expands the capabilities of the Vulkan shader intermediate representation to support subgroup operations and enable enhanced compiler optimizations. The SPIR-V tools ecosystem continues to gain significant momentum with front-end compilers for both GLSL and HLSL, and to expand low-level tooling support from the open source SPIRV-Tools project.

“We are excited to see the progress developers have made with the SPIR-V standardized IR. Developers are using the shader language of their choice and a variety of open source compilers to ship their games and applications. The Vulkan tools and ecosystem is evolving rapidly,” said David Neto, shader compiler team lead at Google and SPIR working group chair.

Open source Vulkan development tools continue to evolve alongside the specification. For example, the LunarG Vulkan SDK and tools layers have been upgraded to support Vulkan 1.1, including the Vulkan Layer Factory (VLF) to enable rapid layer development, the Device Simulation Layer to simulate target device capabilities, without requiring actual physical hardware and the new Assistant Layer to guide developers to best practices and to highlight potential application problems. In addition, the RenderDoc frame capture and introspection debugging tool has added full native Vulkan support on Android with help from Khronos members, and improved support for displaying SPIR-V disassembly using SPIRV-Tools and high-level languages through the SPIRV-Cross cross compiler. RenderDoc has also been upgraded to expose native disassembly and profiling information for vendors who support it, and to support the external memory features that now form a core part of Vulkan 1.1.

To encourage the collaborative evolution of the Vulkan ecosystem, Khronos has created the public Vulkan Ecosystem Forum to share issues and opportunities, and to coordinate cooperative solutions. The aim of the Forum is to respond to developer feedback and foster cross-functional discussions and engagement between users, tools developers and API designers. Join the conversation at Vulkan Ecosystem on GitHub.

“AMD is very excited about the release of the Vulkan 1.1 specifications. This new iteration of the industry standard builds on its strong foundations and expands its reach by making the API more accessible to developers. New Vulkan 1.1 features such as subgroup access in compute shaders enable console-like optimizations that will empower developers to exert more control on the GPU than ever before,” said Andrej Zdravkovic, corporate vice president of software, AMD. “Vulkan also enriches its connectivity with other APIs by supporting interop operations, and finally enables first-class support for multi-GPU and VR systems. AMD believes that this major upgrade to the API will delight the existing Vulkan community and continue to broaden the user base.”

“The new additions in Vulkan 1.1 are a game changer for Vulkan,” said Andrew Richards, CEO of Codeplay Software. “In particular the new subgroup functionality will make a huge difference to our low power, high performance deep learning work.”

“As a major contributor to the Vulkan API, Imagination is pleased to see the next evolution of the API in Vulkan 1.1. The new specification offers new ways to exploit GPU parallelism and support for protected content – enabling advanced video processing in Vulkan for things like VR Cinema,” said Graham Deacon, vice president of PowerVR Marketing at Imagination. “We are amongst the first vendors to have a conformant Vulkan implementation, with all of our existing Vulkan-capable GPU IP able to support the new 1.1 standard. The new subgroup and protected content features are fully available in many of our newer cores.”

“Vulkan is vital to NVIDIA’s business as it enables developers to get the best from our GPUs across a wide range of platforms,” said Dwight Diercks, senior vice president of software engineering, NVIDIA. “Our Vulkan 1.1 drivers, with full subgroup functionality, are available for Windows, Linux, and Android on the day of the specification launch. We will continue to take a leadership role within Khronos to ensure Vulkan evolves to meet the needs of developers and the wider industry.”

“Vulkan is enabling high fidelity games to make the most out of the capability in mobile, with great titles like Honor of Kings from Tencent running across many Galaxy devices” said Taeyong Kim, VP of Graphics at Samsung Electronics. “Vulkan 1.1 builds on this, adding functionality for VR gaming and 360 video that will enable immersive content on mobile products and VR headsets.”

“Vulkan 1.1 and SPIR-V 1.3 are another step in providing better support for compute, as it adds subgroups, 16-bit numbers and a restricted form of pointers”, said Vincent Hindriksen, managing director of StreamHPC. “Adding this to the strong industry support for Vulkan and the recently launched portability project, this allows more types of compute-kernels to be run on more platforms.”

“In our non-gaming business, Vulkan 1.1 is a key factor for our success,” said Norbert Nopper, founder of UX3D, “The possibility to utilize simultaneous rendering and multiple GPUs by default does help us to further optimize our engine.”

“VeriSilicon has adopted the latest industry standard low-level GPU API Vulkan 1.1 and is committed to support Vulkan 1.1 across our OpenGL ES 3.1/3.2 class GPUs,” said Wei-Jin Dai, executive vice president of VeriSilicon and general manager of VeriSilicon’s IP Division. “We are glad to see the new functionalities of Vulkan 1.1 API, the multi-GPU support, the premium content protection, and the advanced compute functionality, etc. to unleash the tremendous potential for a new generation of Vulkan applications. We are particularly excited about the opportunities the Vulkan 1.1 brings to the automotive customers to have fine-grained control over graphics quality of service and highly desired security levels and features.”