More marketing information about the GL553VD can be found HERE.

Let’s start with the bundle. It includes the notebook, a power supply, some paper docs, and… a backpack! 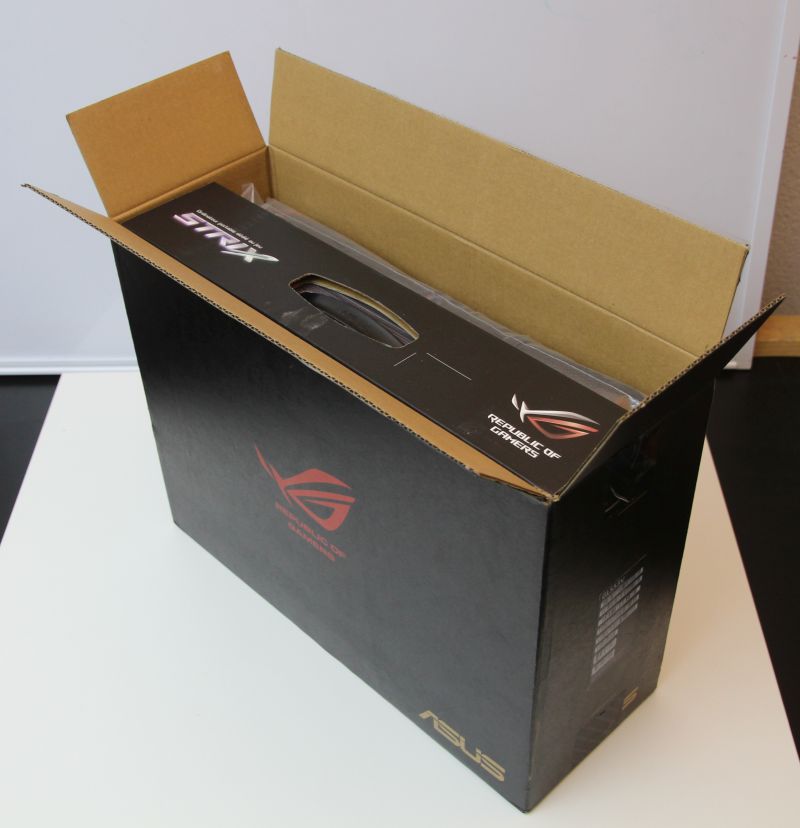 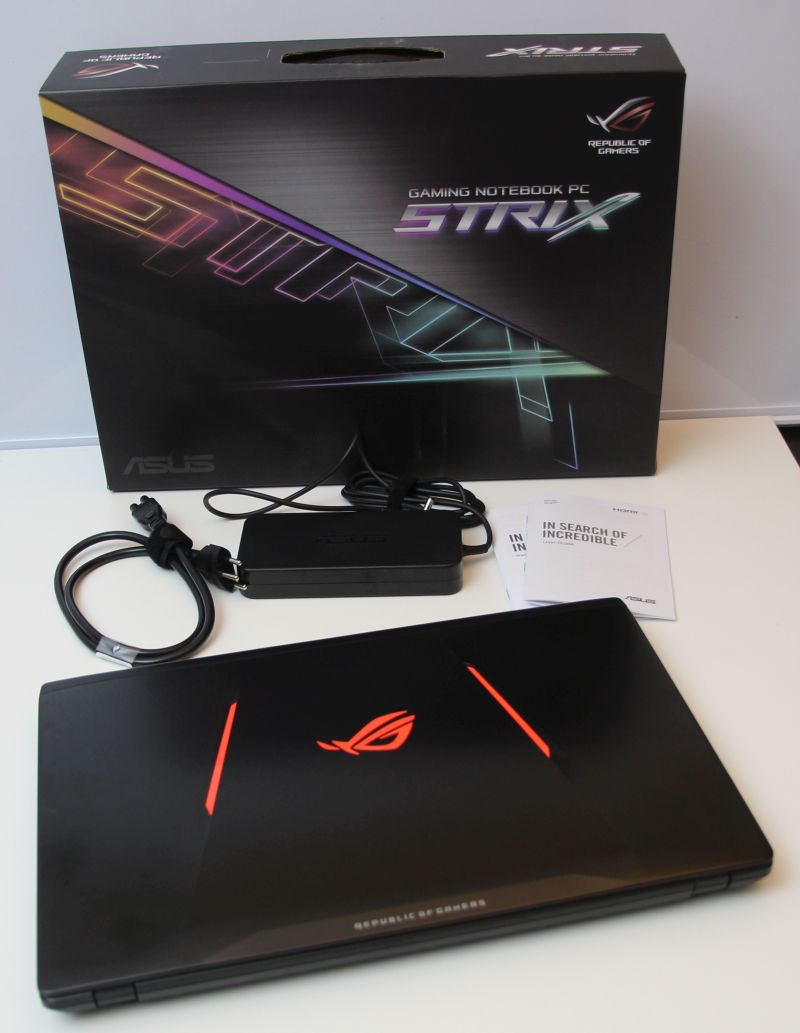 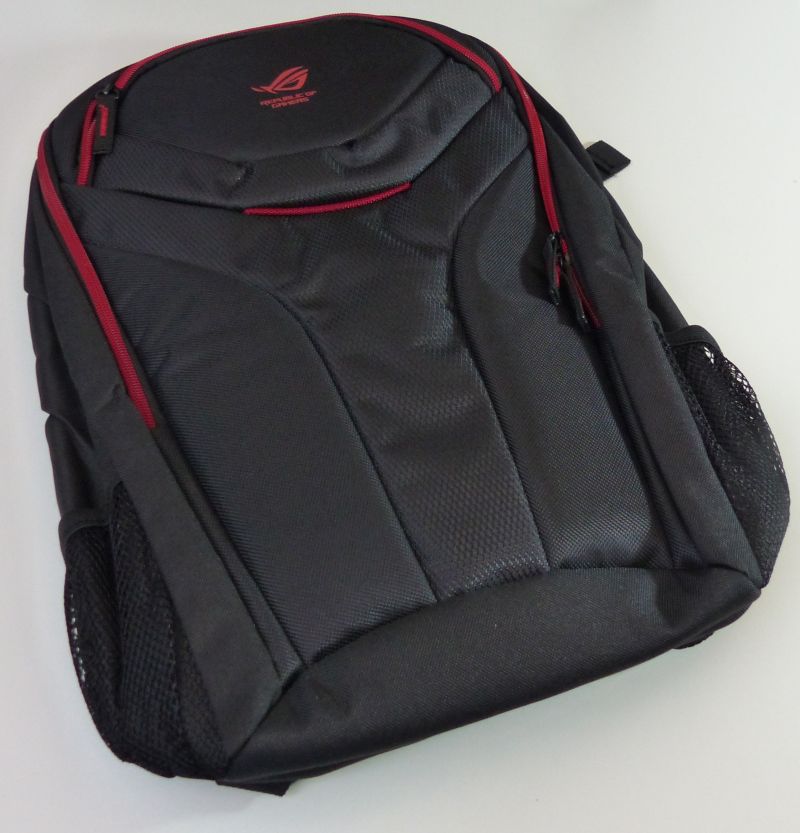 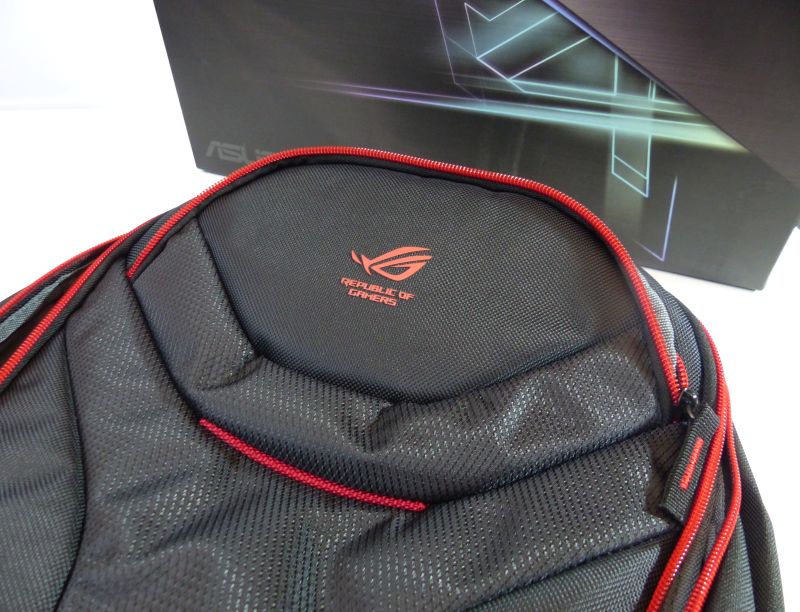 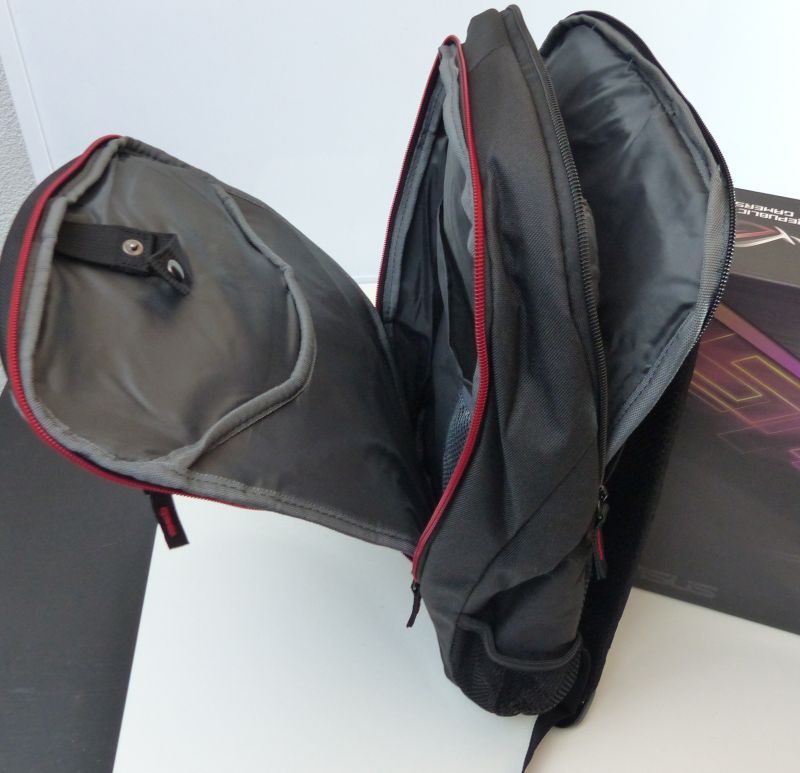 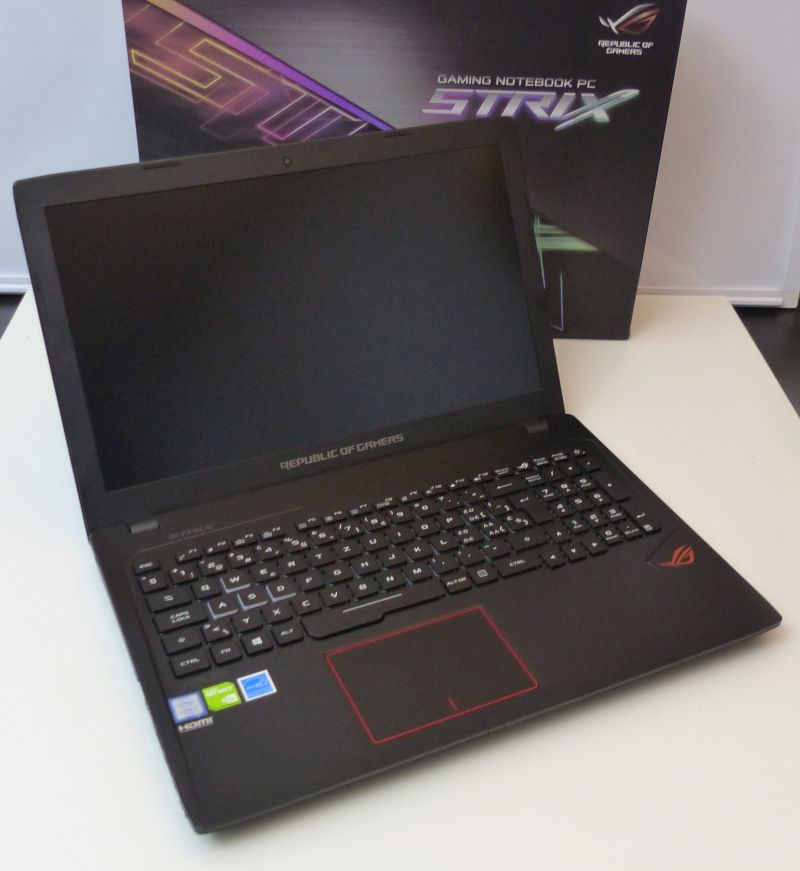 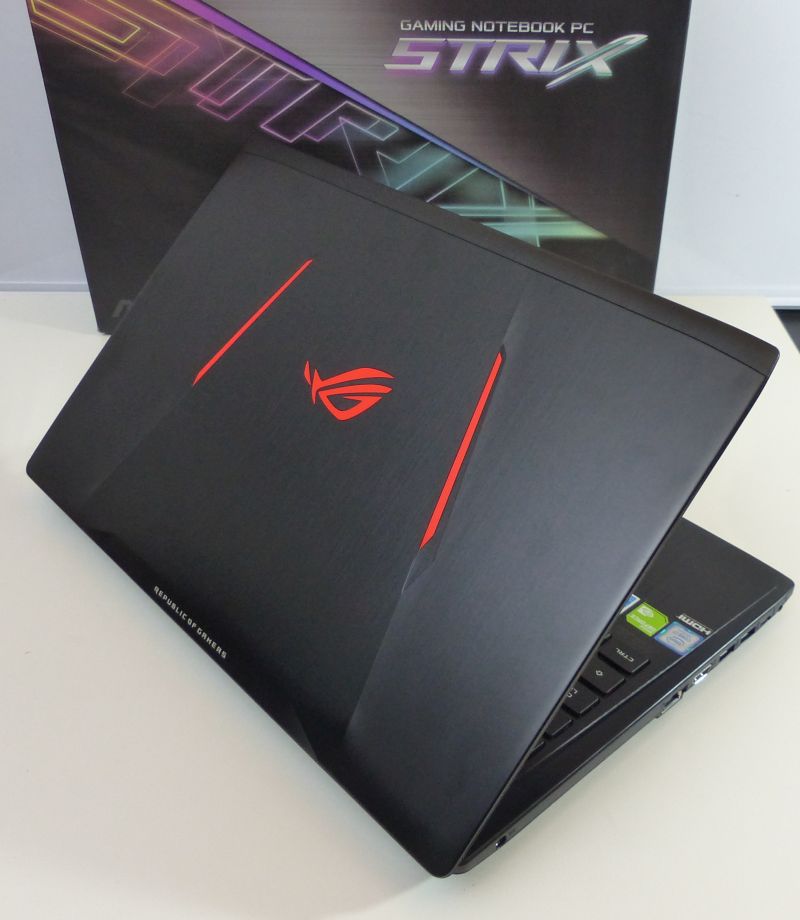 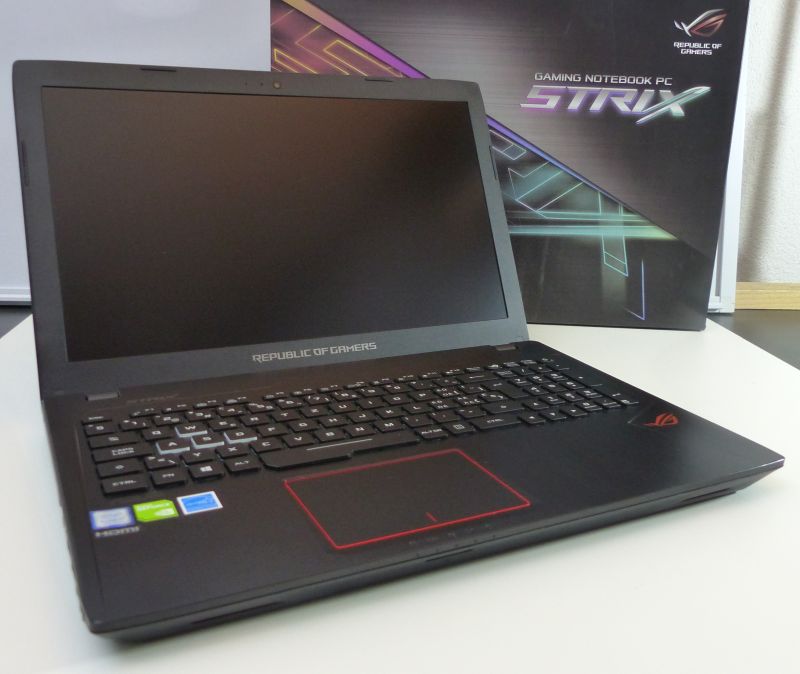 The keyboard is very comfortable and is illuminated (AURA illumination).

ROG Strix GL553 has a specially-designed chiclet gaming keyboard with 4-area RGB lighting and red-backlit scissor-switch keys that offer you 2.5mm of travel distance for tactile keystrokes. It also features highlighted WASD keys, so you know where your hands need to be. On top of that, a larger space bar and isolated arrow keys ensure that everything you need is kept within easy reach. 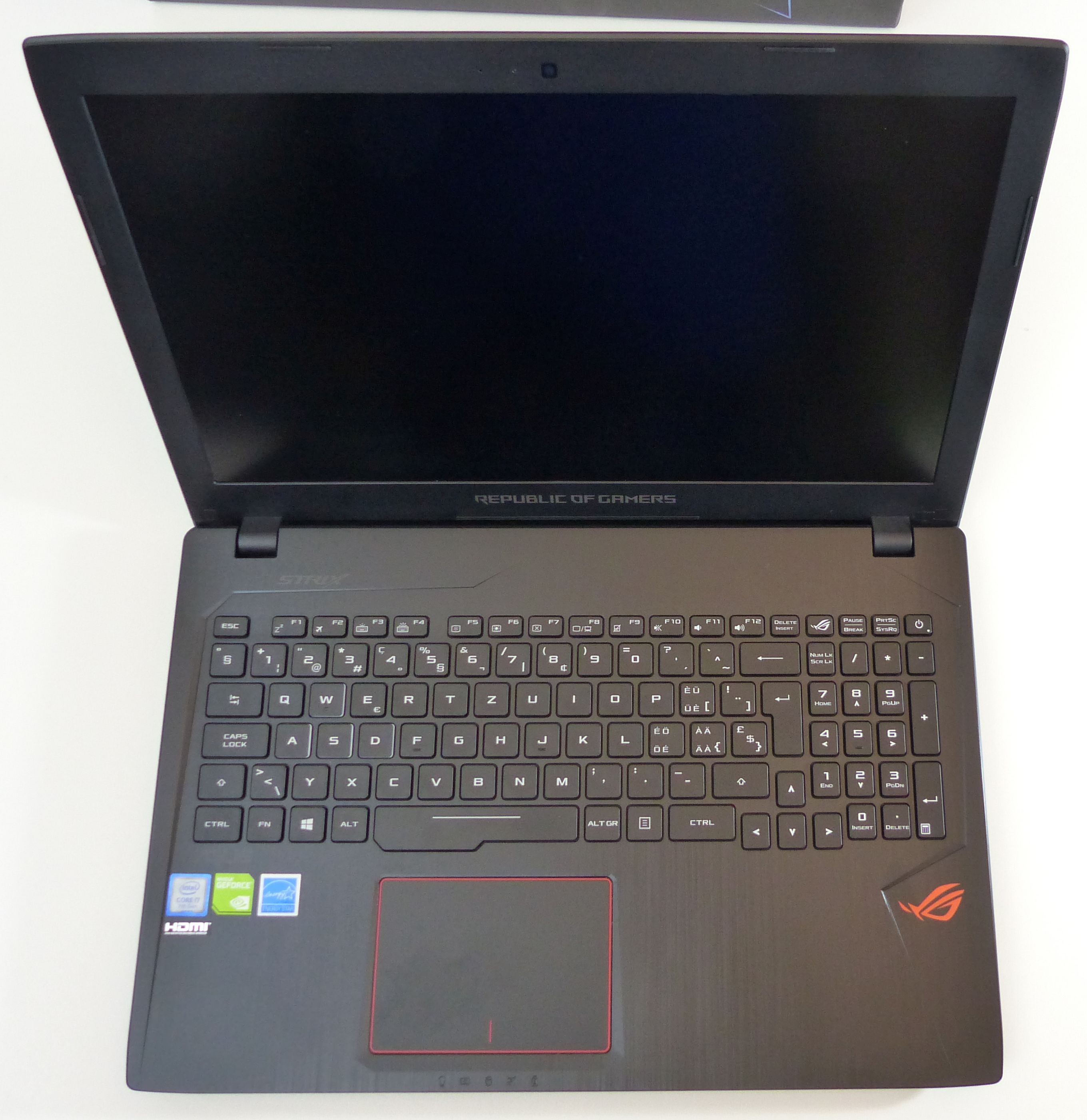 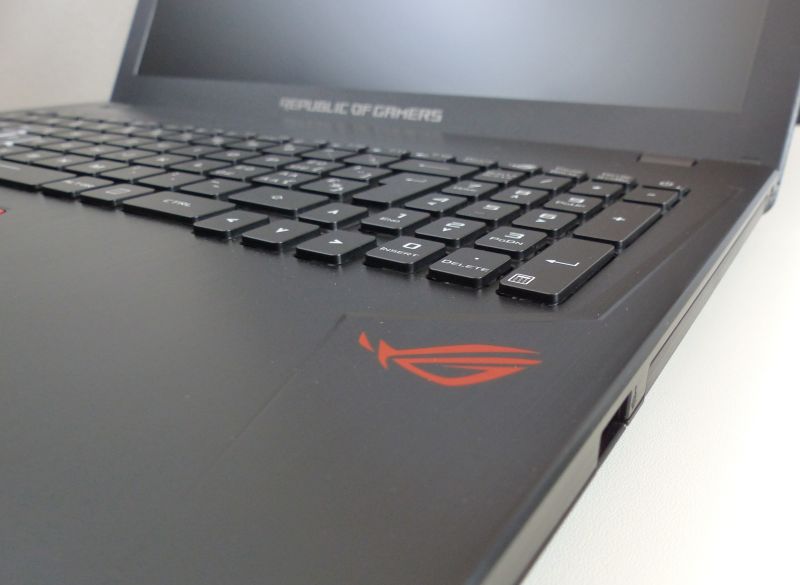 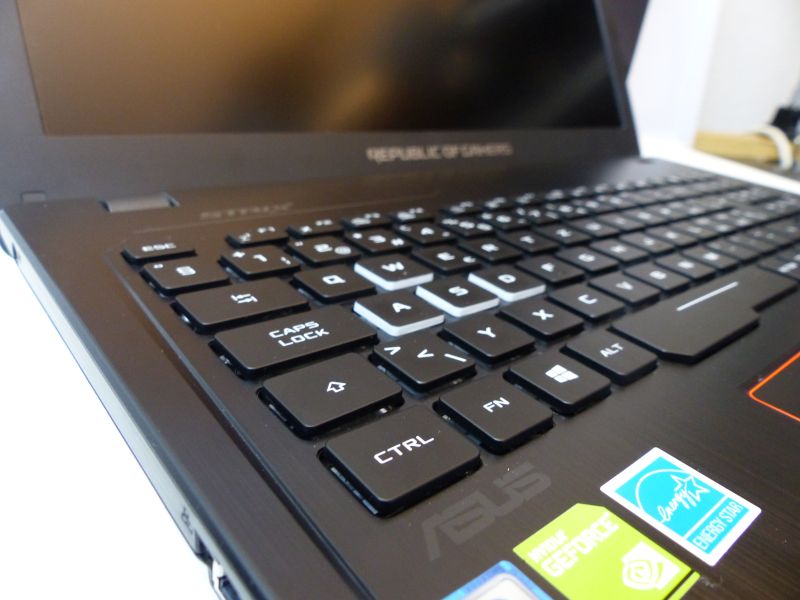 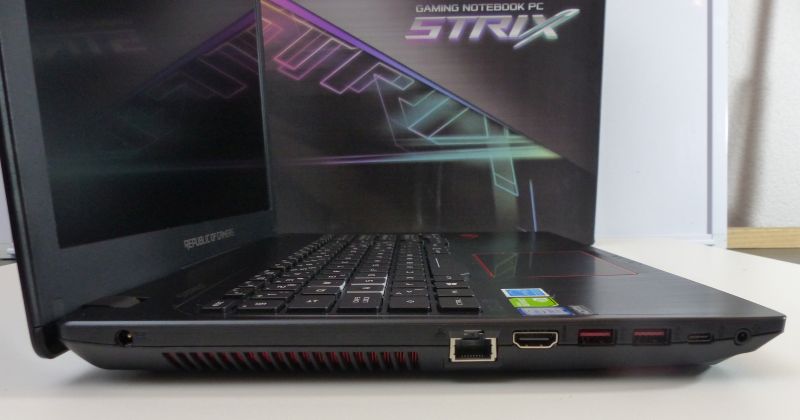 The connectors on the right side. From right to left: the DVD drive and 1 X USB 2.0 port. 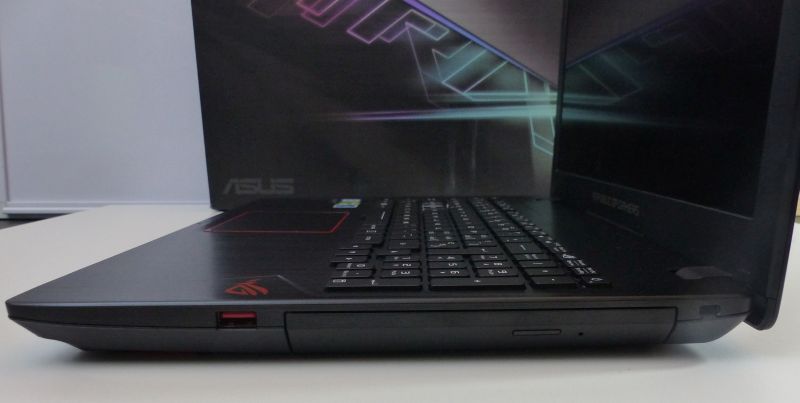 The back side. We can see the SD card reader in the front (under the touchpad). 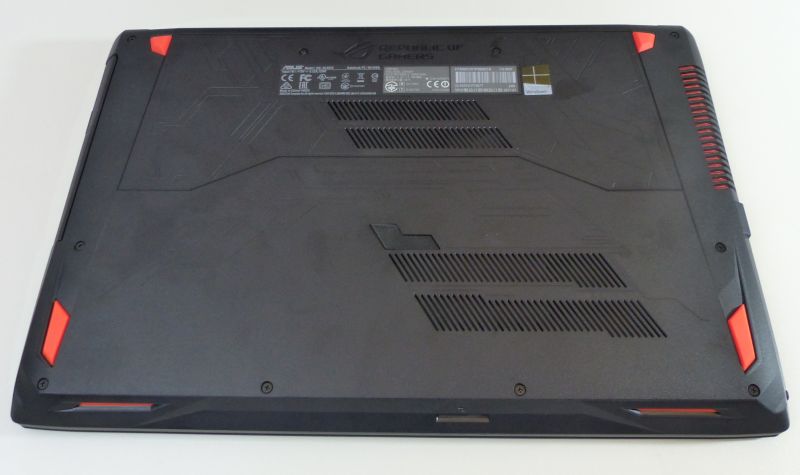 Once you had removed something like 11 screws, you can access to the internals. You can then upgrade the storage units or memory modules. 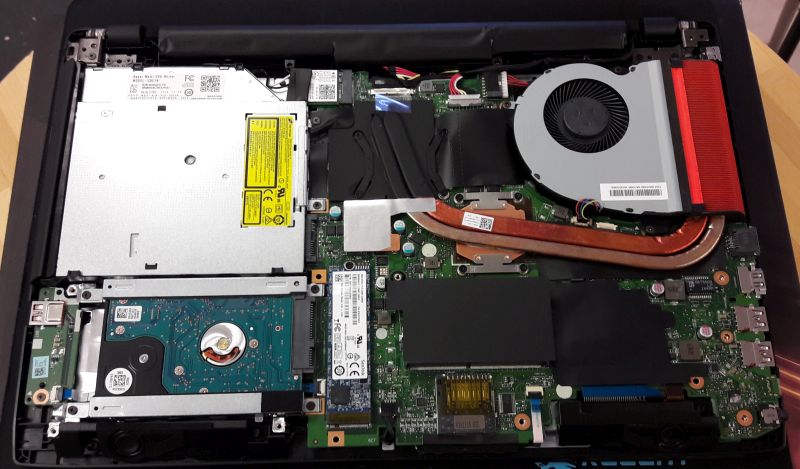 I replaced the mechanical hard disk by a Samsung 850 EVO 500GB SSD: 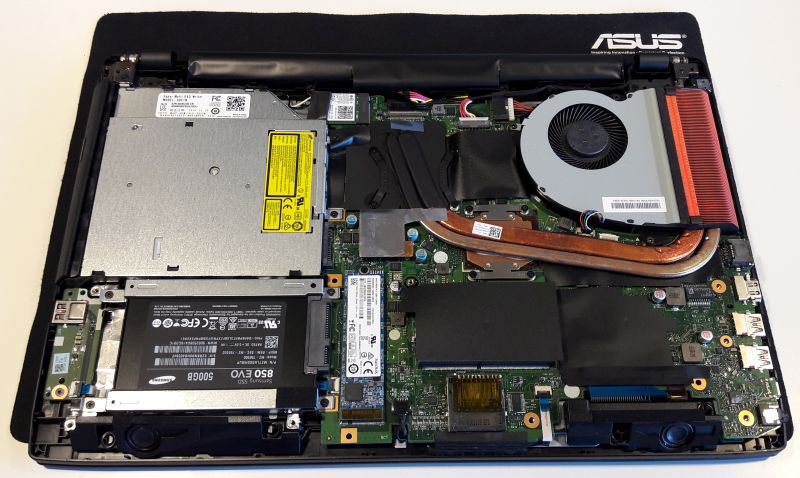 The GL553 comes with 2 speakers that produce a pleasant and clear sound (better than ASUS G752VY one…). These built-in speakers direct sound towards you and the result is a good sound. 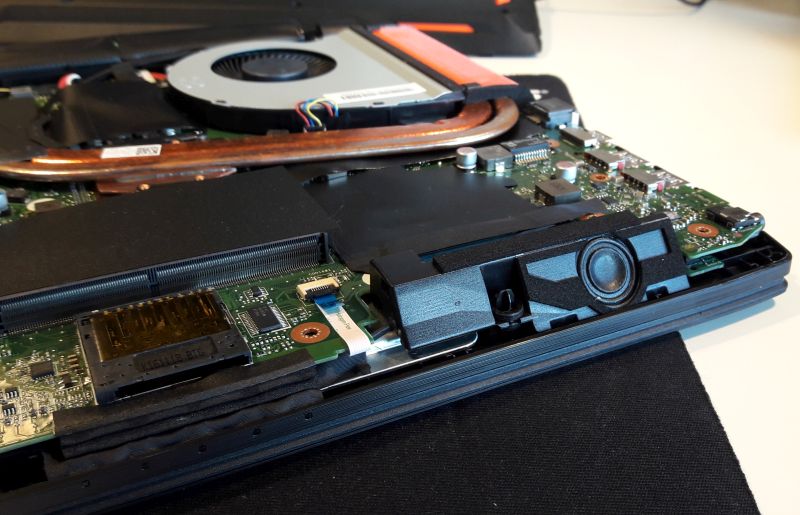 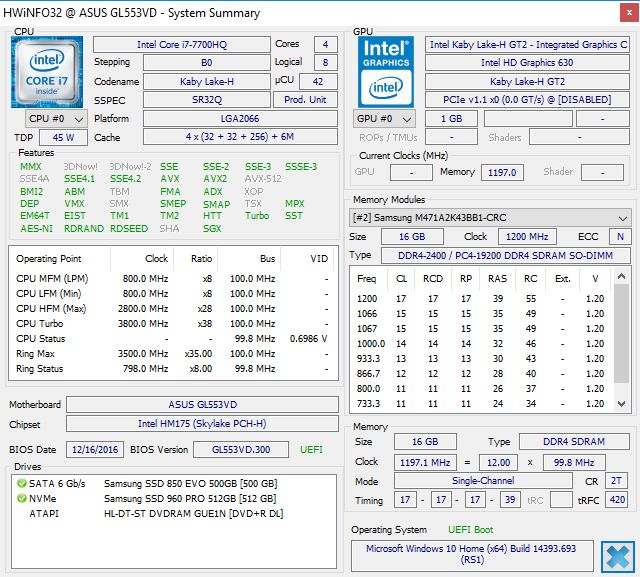 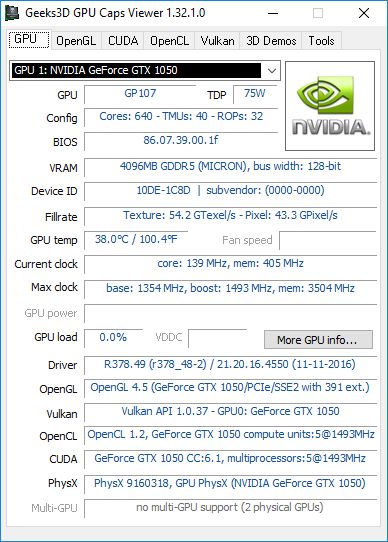 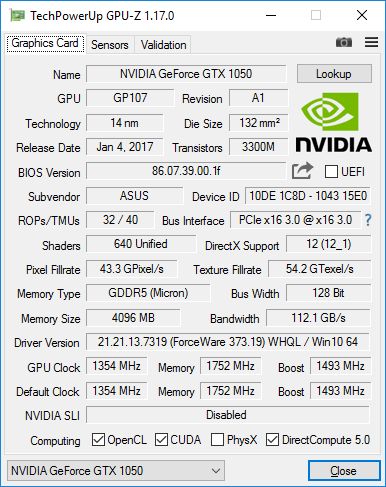 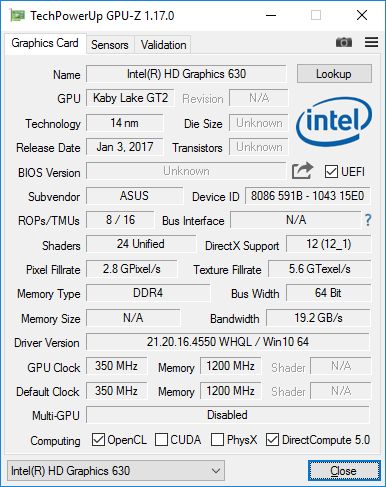 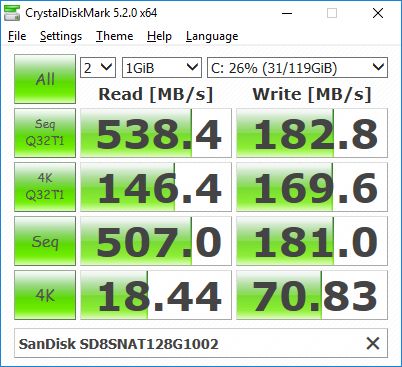 This NVMe 128GB SSD boot disk offers correct read speed (538 MB/s) but poor write speed (182 MB/s). I will do a serious upgrade of this ssd in an upcoming article, so stay tuned. 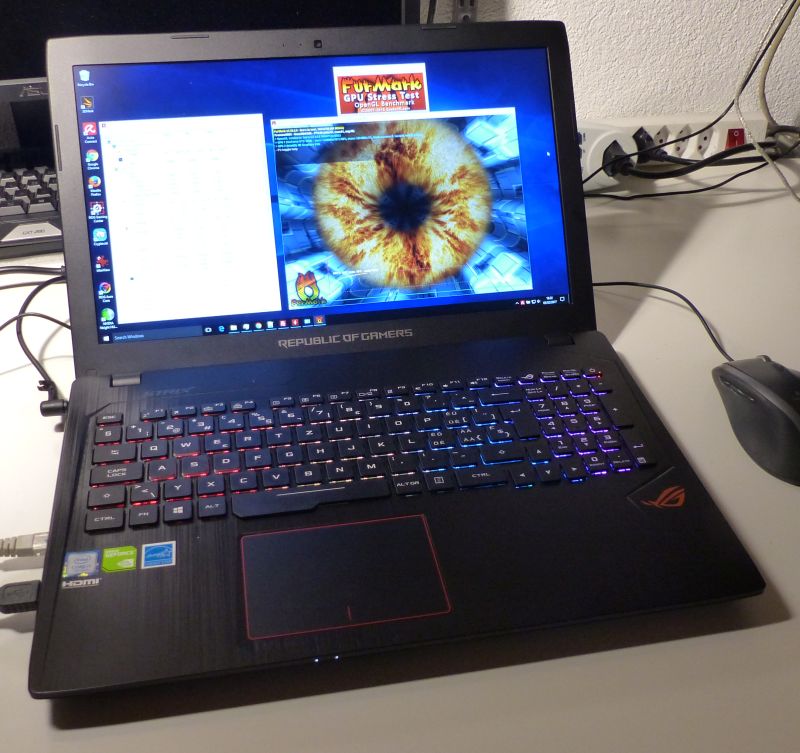 This quick burn-in test has been done with Geeks3D FurMark 1.18.2. The goal is to see if GPU throttling is present. It was a good surprise. There is no throttling at all. The base clock of the GTX 1050 is 1354MHz and the boost clock is 1493MHz. During the FurMark test, the GPU core was clocked at 1430MHz with a GPU temperature of 73°C.

At idle, the GPU temperature was around 39°C. 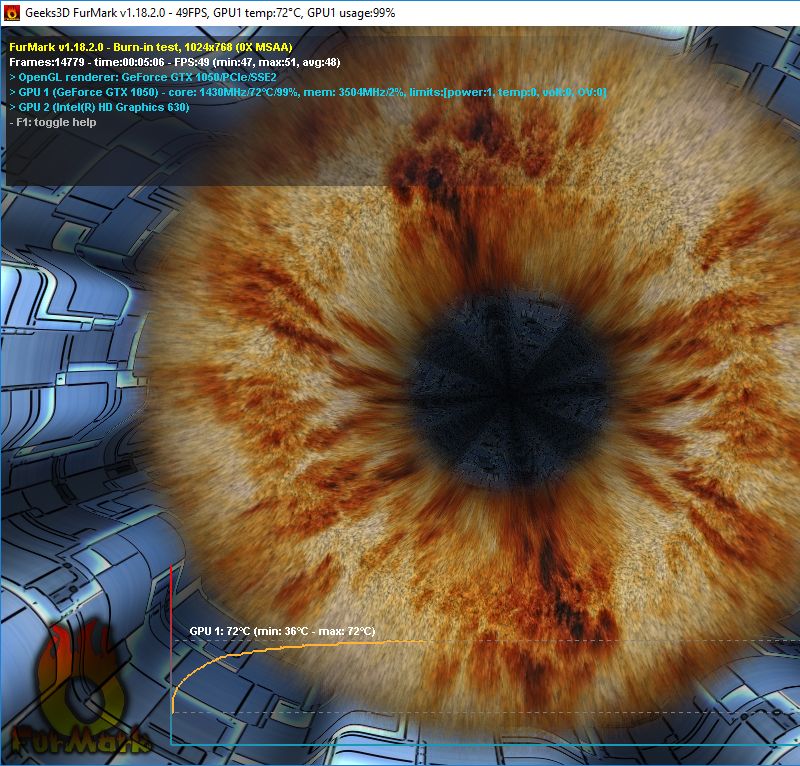 And the noise? At idle the noise is barely audible, we can hear the fan but it’s very acceptable. Under load, it’s another story, the fan noise is loud. Look at the thermal imaging under load and you will understand. 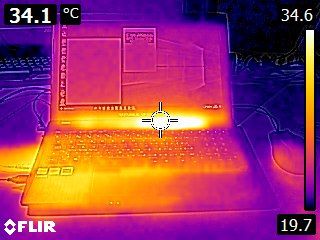 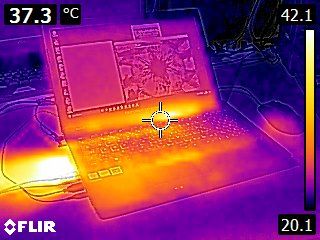 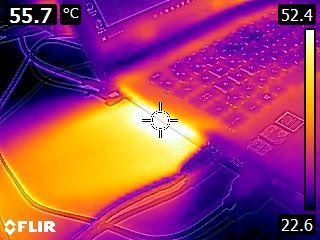 On ASUS GL553VD homepage, I couldn’t find any information about how long the built-in battery can last. The only info is: 4 Cells Battery. So I decided to do a simple test: I unplugged the power connector and I worked on this laptop (internet browsing, youtube video, zip/unzip files, as well as other simple desktop tasks — not 3D intensive tasks). Here are the results:

Conclusion: around three little hours to empty the battery. Hey, it’s a gaming notebook after all…

Let’s start with the thumb-up things. The GL553 features a brand new Kaby Lake Core i7 7700HQ CPU (with 8 logical cores) and a Pascal-based GeForce GTX 1050 GPU. The keyboard is very pleasant and the RGB backlighting is very cool (colors can be customized with the AURA software). The audio system (essentially the speakers!) produces a correct sound and the fullHD anti-glare display (1920×1080) with wide viewing angles is excellent. The DVD drive is handy and the presence of a RJ45 connector is very appreciable. The backpack is also a nice surprise. I like it.

This GL553VD comes with 16GB of DDR4-2400 memory. This is a correct amount of system memory and should be enough in most of cases. But if you need more memory you can add a second 16GB module for a total of 32GB.

But after searches and tests, I found a solution to rid the notebook of this nasty noise. More about this solution in a very upcoming article 😉 (Update – 2017.02.13: How to Disable Intel Turbo Boost Technology (on a notebook))

The touchpad is not good especially the left click. I don’t know if this is only on my sample but I don’t like this touchpad. The last time I tested a similar touchpad, it was on the ASUS G501VW: the touchpad of the G501 worked fine and was pleasant. But to be honest, I don’t care about the touchpad because I use a real mouse…

I would have put a faster boot disk in this kind of notebook. The Sandisk offers good reading performances but writing performances are similar to mechanical disks… In a next article, I will replace the Sandisk by a really fast SSD (Update – 2017.02.13: GL553VD updated with a Samsung 960 PRO).

All the previous drawbacks can be fixed and when they are fixed, the GL553VD is a nice notebook. It’s not the ultimate gaming weapon because the GTX 1050 is rather an entry level GPU but for a graphics developer, this notebook is perfect. If you need a 15-inch gaming notebook with a reasonable price and a nice design (black brushed aluminium case), the ROG Strix GL553 is a good choice. 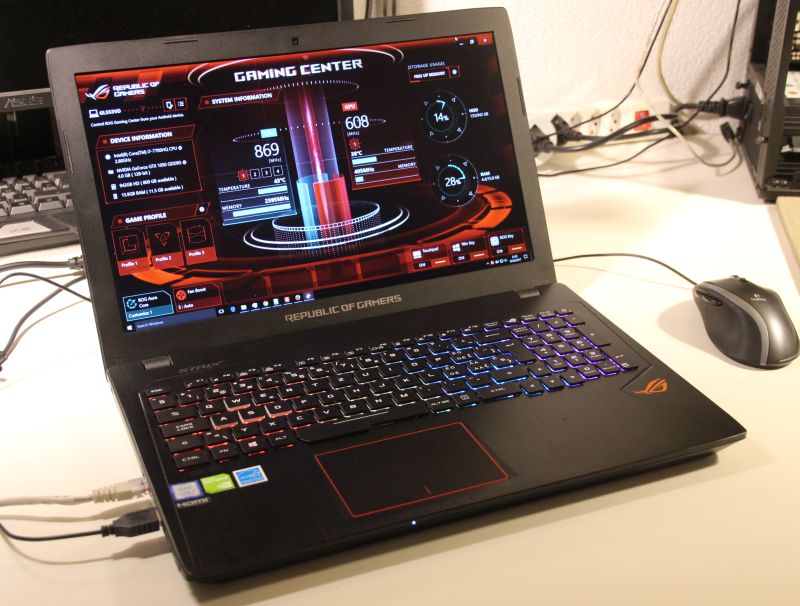