GeeXLab, the successor of GLSL Hacker, comes with the support of Direct3D 12. It’s not a full support but most of the basic things are available: command lists (CL), pipeline state objects (PSO), constant buffers (CB) and HLSL shaders.

An introduction to Direct3D programming with GeeXLab is available HERE.

Since GeeXLab is now available with an OpenGL and a Direct3D 12 renderers, here is a quick benchmark that shows the difference of performance between Direct3D 12 and OpenGL 3.2 in a very simple scene: a phong-textured mesh (a torus to be original) is rendered with various polygon density. This test uses one command list, one PSO, one HLSL program, one mesh and one texture. 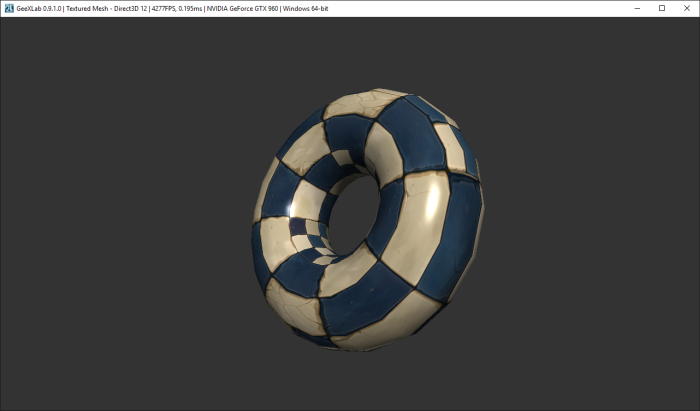 You can download both GeeXLab (version 0.9.3.0+ is recommended) and the test from THIS PAGE. The test is available in the host_api/Direct3D12_vs_OpenGL/ folder of the code sample pack (files: 09-lighting-mesh-d3d12.xml and 09-lighting-mesh-gl32.xml).

The results of this test should be taken with caution because it’s my first implementation of a Direct3D 12 plugin for GeeXLab and graphics drivers are also constantly updated. I will update this post as soon as I find bugs or bring some optimizations in GeeXLab that can change the results.

The FPS in the following tables are the average framerates. 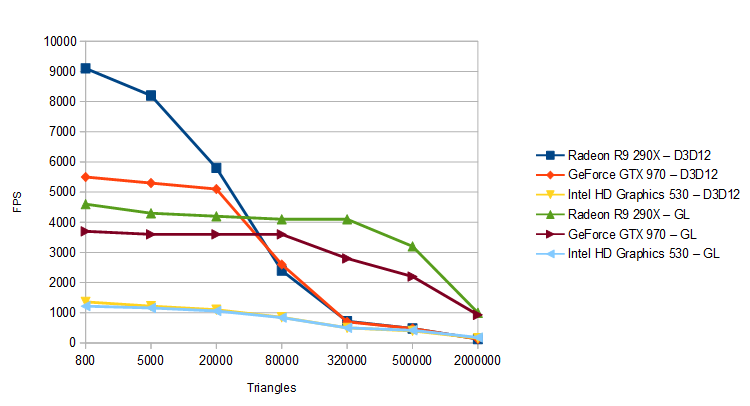 According to this test, Direct3D 12 is faster than OpenGL when the number of triangles is low. AMD Radeon cards are particularly fast! Around 80K polygons, Direct3D offers the same kind of performance than OpenGL. Above 80K polygons, OpenGL is faster. The case of Intel GPU is interesting because it has more or less the same performances in D3D12 and GL. What’s more for a mesh of 2-million polygons, The Intel GPU is faster than a GTX 970 or a R9 290X in D3D12! It looks like for many polygons, there is a CPU-bottleneck somewhere in the D3D12 rendering pipeline that does not reflect the real power of GPUs. 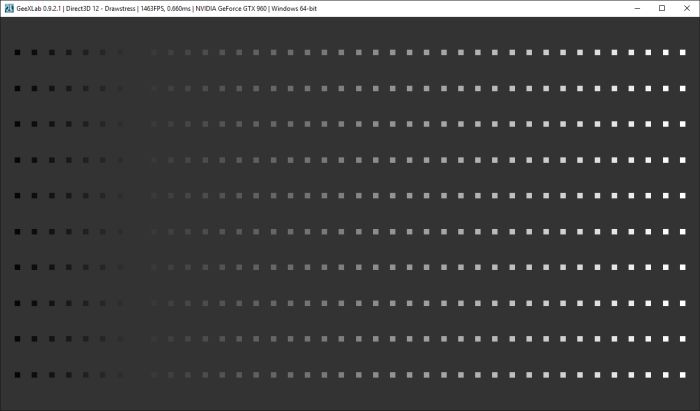 The test is available in the host_api/Direct3D12_vs_OpenGL/ folder of the code sample pack (files: 08-drawstress-d3d12.xml and 08-drawstress-opengl.xml).

In this test, a quad is made up of 4 vertices and 2 triangles.

To change the number of quads, edit the xml file and look for the lines:

GeeXLab is maybe not the best tool for this kind of test (a loop with 4000 iterations) because of the overhead of the virtual machine (Lua and host API functions calls). A C/C++ based test should be better. But this GeeXLab test shows that we can draw more objects with Direct3D 12 than with OpenGL. This is particularly visible with 4000 quads: D3D12 is twice faster: 180FPS for D3D12 against 97 FPS for OpenGL.