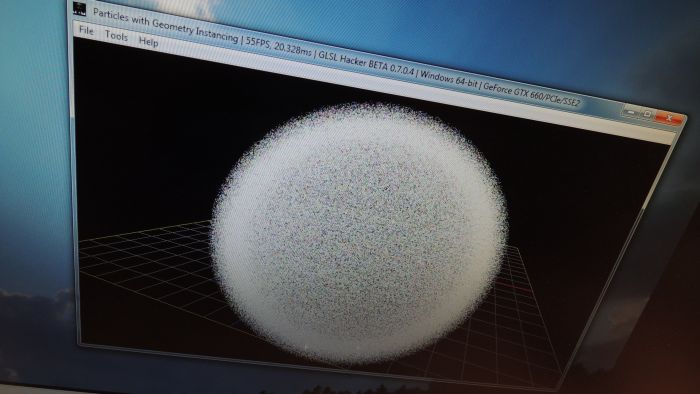 Now let’s see a third way, this time, based on geometry instancing: we have a quad (4 vertices) and we use the GPU built-in geometry instancing feature (GL_ARB_draw_instanced + GL_ARB_instanced_arrays, OpenGL 3.3+) to render a lot of quads, each quad being a particle. The billboarding is done for every instance of the quad in the vertex shader.

A demo, coded for GLSL Hacker, is available in the host_api/Particle_Geometry_Instancing/ folder of the code sample pack. Start you favorite FPS-meter (FRAPS, etc…) and load the particle_gi_1920x1080_fullscreen.xml file in GLSL Hacker. 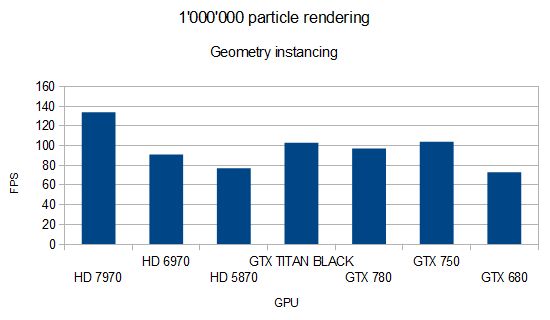 On NVIDIA GPUs, results are a bit difficult to interpret… Clearly, rendering particles with geometry instancing is not the strength of GeForce cards. Almost 70% slower on the GTX 780! The GTX 780 (Kepler) is even slower than the GTX 750 (Maxwell first gen)! Only the GTX 680 remains constant. I think I will do a geometry instancing test to check how Radeon and GeForce behave when the number of triangles per instance vary, just to be sure that these results are coherent.

Conclusion: Point sprites are the fastest way to render a lot of particles. If you need more control over particle rendering, you can use geometry instancing with Radeon GPUs and geometry shaders with GeForce GPUs.