AMD has unveiled today its new technology: TressFX. TressFX, co-developed by AMD and Crystal Dynamics, is a new technology for real-time realistic hair rendering. TressFX is based on Microsoft DirectCompute and use some AMD’s works such as OIT (Order Independent Transparency) or PPLL (Per-Pixel Linked-List).

TressFX Hair revolutionizes Lara Croft’s locks by using the DirectCompute programming language to unlock the massively-parallel processing capabilities of the Graphics Core Next architecture, enabling image quality previously restricted to pre-rendered images. Building on AMD’s previous work on Order Independent Transparency (OIT), this method makes use of Per-Pixel Linked-List (PPLL) data structures to manage rendering complexity and memory usage. DirectCompute is additionally utilized to perform the real-time physics simulations for TressFX Hair. This physics system treats each strand of hair as a chain with dozens of links, permitting for forces like gravity, wind and movement of the head to move and curl Lara’s hair in a realistic fashion. Further, collision detection is performed to ensure that strands do not pass through one another, or other solid surfaces such as Lara’s head, clothing and body. Finally, hair styles are simulated by gradually pulling the strands back towards their original shape after they have moved in response to an external force. Graphics cards featuring the Graphics Core Next architecture, like select AMD Radeon™ HD 7000 Series, are particularly well-equipped to handle these types of tasks, with their combination of fast on-chip shared memory and massive processing throughput on the order of trillions of operations per second.

TressFX will be used in the upcoming PC version of Tomb Raider: 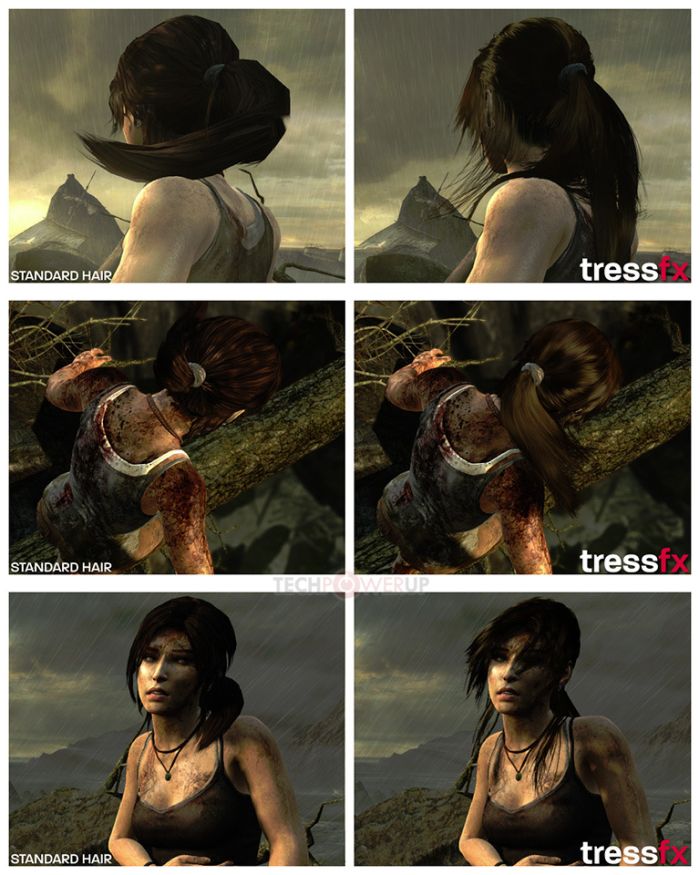 NVIDIA has PhysX and now AMD has TressFX (and maybe one day PhysX will have its own hairFX module, who knows). But it’s not clear whether TressFX can or can not run on NVIDIA’s GeForce cards…