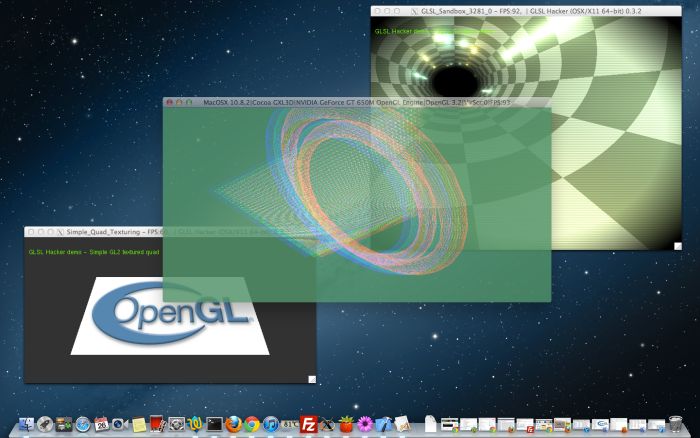 My first OpenGL tests under OSX 10.8

These last months I worked (and I still work) on my new 3d lib that will be used in all my new tools. This lib is cross-platform and supports Windows, Linux and now OS X.

I could enter in Mac’s world thanks to a MacBook Pro (with a 15-inch Retina display). I code with this laptop for some weeks now and I thought it was time to write a bit about the first contact with OpenGL under OSX from the point of view of a Windows developer… 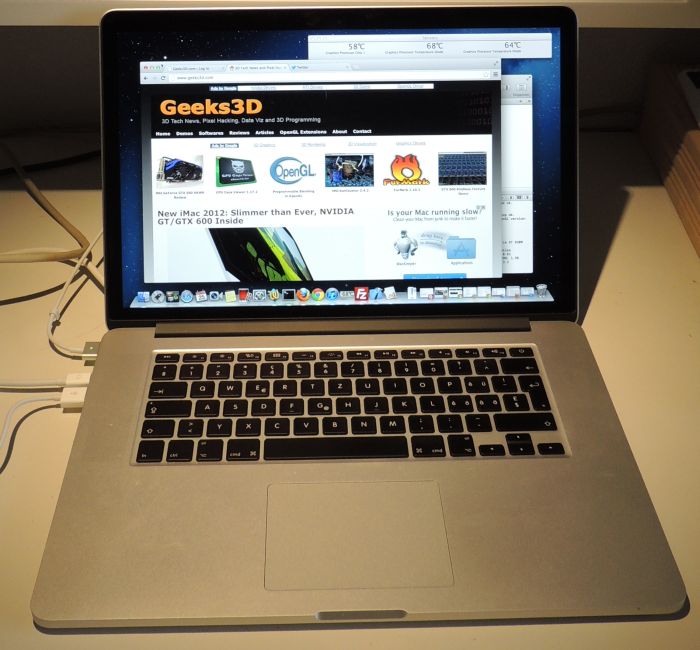 One of the first things I do when I arrive on a new OS is to look at the OpenGL support and extensions. I did it for Linux (see Linux: Mesa, Gallium3D, Nouveau…) and now I do it for OSX.

OSX 10.8 supports OpenGL 2.1 and OpenGL 3.2 core profile. The compatibility profile for OpenGL 3.2 is not available on OSX. Once my 3d lib started to run on OSX, I checked the OpenGL extensions available on my rMBP and they were exactly the same than those listed on Apple OpenGL capabilities tables for OSX 10.8, 10.7 and 10.6:

With an OpenGL 3.2 core context, 15 extensions are exposed for the software renderer (a highly optimized floating point CPU-based renderer), 16 extensions for the GT 650M and 13 for the HD 4000. It’s useless to list them here, just check the capabilities tables. So if you plan to add OpenGL 3.2 support for your software under OSX 10.6 (Snow Leopard), check the tables before: it’s not possible, OpenGL 3.2 being only available on OSX 10.7 (Lion) and OSX 10.8 (Mountain Lion). And how many extensions are exposed for the HD 4000 with an OpenGL 2.1 context under OSX 10.8? Check the table the right table and I bet you’ll find 123. This is one of the first surprises: OpenGL features are strictly defined on OSX while this is not the case in Windows or Linux worlds. This is nice because you can know in advance if your soft will work fine on a particular OSX version, but at the same time, latest features of the GPU can’t be exploited (OpenGL 4 for example). This under-control situation looks like D3D one, we lose the ability of OpenGL extensions to expose new features. NVIDIA has added a cool feature in GTX 600 called bindless textures. On Windows and Linux, bindless textures were quikly available thanks to OpenGL extensions while that was not the case for D3D. Actually I’m a bit too sever because some beyond GL3.2 extensions are exposed but you can count them with one hand 😉

The first time I checked the extensions exposed for the GT 650M with the OpenGL 3.2 context, I saw only 16 extensions. I thought the GL 3.2 support was far from complete. I was wrong. On Windows, when you ask for a GL 3 core profile, you retrieve all OpenGL extensions because they are not part of the OpenGL core libraries (GL 1.1 is the core on Windows). With latest R310.33, no less than 311 OpenGL extensions (I don’t count the WGL ones) are exposed. On OSX, OpenGL is fully integrated in the system and is the foundation for hardware-accelerated graphics (Quartz Extreme, the GPU layer of Quartz). That explains why there are only 16 extensions on OSX compared to the hundred ones on Windows: all extensions of OpenGL 3.2 are part of the OpenGL core libraries on OSX. Then, once a GL 3.2 context is created and made current, you can directly call glCreateShader() for example. That was another surprise fro me. On Windows (and Linux), you have to fetch entry points (function pointers) before calling OpenGL functions. You can do this yourself or by using OpenGL extensions loaders such as GLEW. On OSX, extensions loaders are somewhat useless to load OpenGL 3.2 functions but you can still use them (the extensions loaders), they will give you all function pointers so you can use the same code to initialize OpenGL in your cross-platform app. And for an OpenGL 2.1 context, extensions loaders are useful to get an access to all non-GL2.1 features.

Now the question: what are those 16 extensions? They are related to functionalities that are not included in OpenGL 3.2 spec, like GL_APPLE_xxxx extensions or new GL_ARB_xxx. By the way, all GL_ARB_xxx extensions exposed (GL_ARB_instanced_arrays, GL_ARB_occlusion_query2, GL_ARB_shader_bit_encoding and GL_ARB_timer_query) are part of the OpenGL 3.3 specifications, that means that a subset of OpenGL 3.3 is supported on OSX. 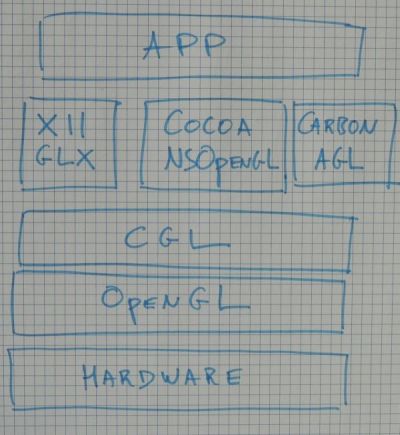 1 – CGL (Core OpenGL) is the lowest API available in the GL-windowing API stack. All other APIs rely on it. CGL is not related to a particular windowing interface and alone, CGL can be used only in fullscreen applications. Used alone is important, because and that’s the strength of CGL, you can use it with other interfaces like GLX or NSOpenGL.

2 – AGL is the Carbon interface related API. Carbon is a 32-bit only windowing system and is no longer supported by Apple. Of course a Carbon app can still run on OSX and you can still code an AGL-based demo, but this API is clearly deprecated.

3 – GLX… the Linux one? Yes, man! OSX is based on a Unix core (Mach + BSD) and supports X11 via the XQuartz project. XQuartz is a version of the X.Org X Window System that runs on OSX. On OSX 10.8, X11 is not available by default and you have to install XQuartz to compile and run X11-based applications. The nice news, is that the compilation of a Linux / X11 app under OSX is straightforward. I successfully compiled a the Linux version of the successor of GeeXLab under OSX without problem, nor headache! But it seems that GLX/X11 is limited to OpenGL 2.1 on OSX. I didn’t manage to create an OpenGL 3.2 core profile (if someone knows the tip…). The support of X11 / GLX is a nice thing for those who need to quickly port a Linux app on OSX. 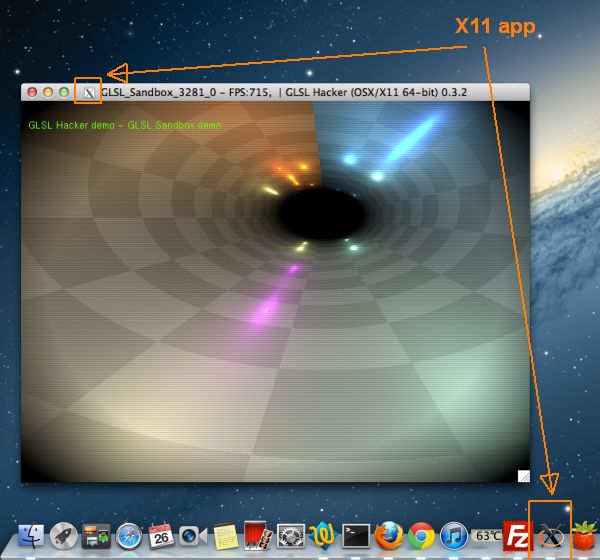 
Thanks to the X11 support in OSX, I could quickly compile and test the Linux version under OSX. Great!

4 – NSOpenGL from the Cocoa framework. Cocoa is the API of choice for buidling modern OpenGL applications under OSX. Cocoa is the successor of Carbon and is a full 64-bit windowing system. Combined with CGL, you can create and customize your OpenGL contexts: vsync, gl 3.2 core, fullscreen software renderer, etc… More on Cocoa later 😉 Now I spend my time on updating my apps for Cocoa and here is the first application that will be released soon: 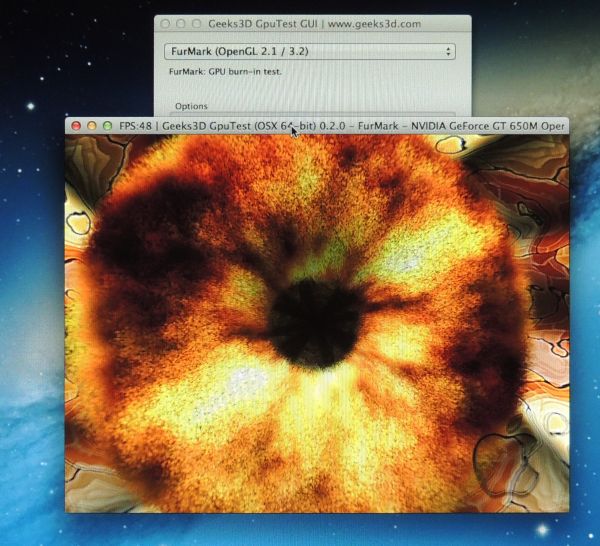 
This screenshot shows GpuTest with a furry torus burning the GT 650M of the MacBook Pro (really noisy 😀 ). GPU Test is a small cross-platform OpenGL based benchmark tool that packs in the first version tests based on FurMark and TesssMark. There is also a geometry instancing test… The 3D engine used by GpuTest is the same than the one used by GLSL Hacker in the OSX/X11 test but this time in a Cocoa window. Next big job: a Cocoa version of GLSL Hacker!

I found the creation of OpenGL contexts easier than on Windows, especially when you need stuff like MSAA. And the fullscreen management… or transparent OpenGL windows (look at the first header image of this post)… so simple! 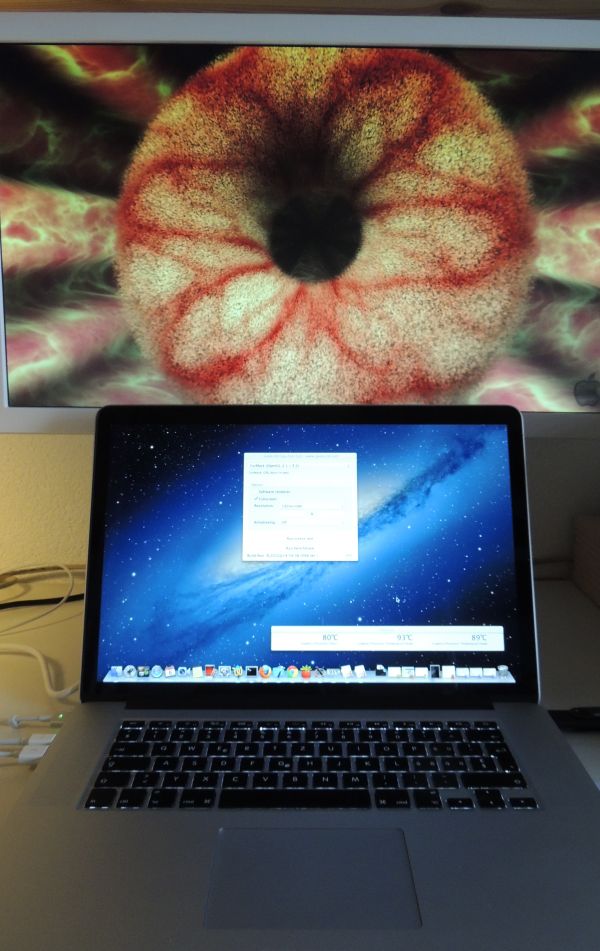 GpuTest – FurMark in fullscreen on the second monitor on OSX

17 thoughts on “Overview of OpenGL Support on OS X”