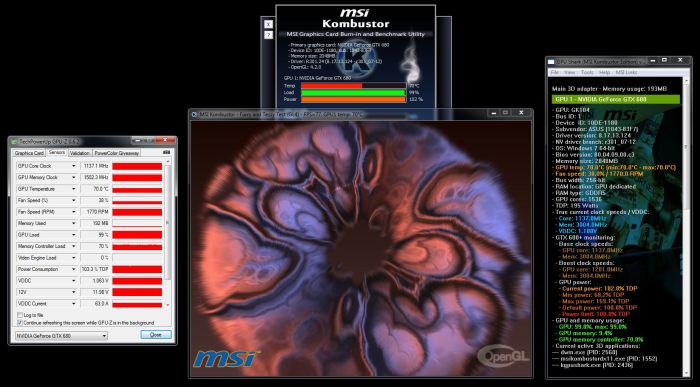 The aim of the burn-in is to reach the maximal GPU temperature and power consumption. The burn-in test allows to test the efficiency of the cooling system as well as the quality of the power circuitry. 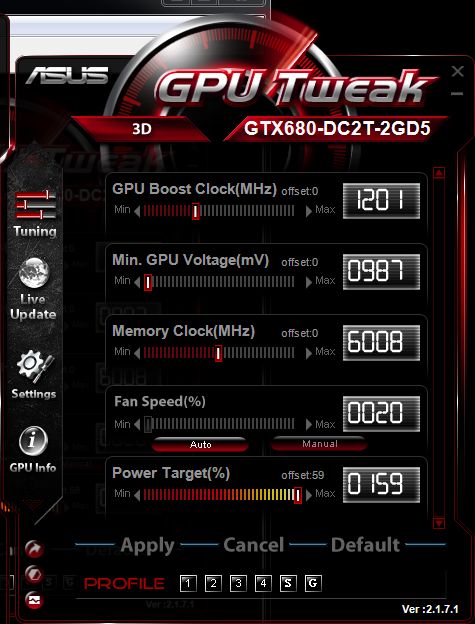 Then I launch a burn-test session with the new OpenGL 4 stress test in 800×600 windowed mode. Here are the values of the different parameters after a burn test of 5 minutes:

At idle state, the total power consumption of the testbed is 65W and the GPU temperature is 31°C.

Under this highly stressing situation, the DirectCU II cooler is a bit audible but remains quieter than the VGA cooler of the reference board.

As you can see, the power consumption does not exceed 120% even if the power target is set to 159%. It’s probably because in this situation, 120% corresponds to the TDP of the GTX 680 DC2 TOP and NVIDIA hardware monitoring does its job by keeping the TDP in under its max value.

As you can see, the DirectCU II does a good job, keeping the GPU temp at a max value of 80°C while the ref board reaches 87°C. But the difference of 7°C is not really impressive and we are far from the marketing slogan: 20% cooler…