OpenCloth is a collection of cloth simulation algorithms. Each algorithm is available with its own and independent Visual C++ project. Cloth rendering is done with the OpenGL API. The projects require only few libs: GLEW, Freeglut and GLM. Most of the simulations are done with the CPU except the Verlet based one that is available in two flavors: CPU and GPU (the simulation is processed by a GLSL pixel shader).

You can access to the source code by browsing the repository or by checking out the complete project. Use this URL for SVN: http://opencloth.googlecode.com/svn/ 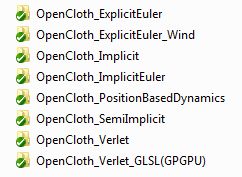 Introducing an OpenGL based cloth simulation code base. We implement all of the existing cloth simulation algorithms in as simplistic an approach as possible so that learners may know exactly what is needed to get a cloth simulation system up and running in OpenGL with a minimum of fuss. OpenCloth project has been initiated with a view that it may help beginners and researchers alike to implement the basic algothims for cloth simulation using OpenGL API. It is not intended as another library that you can plugin into your game engine directly. Rather, you can learn from it and then implement a technique or two in you own game/physics engine. With a little bit of effort, it should be straight forward to implement the discussed algorithms on other platforms and Graphics API. Focus is on how to handle the bare minimum required to implement the techniques. Rather than wrapping code into classes, we implement the whole code in a single source file.

3 thoughts on “OpenCloth: A Collection of Cloth Simulation Algorithms”