That said, AOGenMark is a command line tool with few parameters. In short, you can specify the number of threads (-t), the number of samples (-s) which are related to the heaviness of computations (the more the samples, the heavier the computations) and the thread affinity (-a). Thread affinity allows to stick a thread with a CPU (logical) core. For example, if you have two cores and you launch AOGenMark with 4 threads, thread 1 with run on core 1, thread 2 on core 2, thread 3 on core 1 and thread 4 on core 2.

Starts AOGenMark with 4 threads, 8 samples and no thread affinity.

How to bench a CPU with AOGenMark? It’s simple: the smaller the elapsed time to finish the bench, the faster the CPU. For recent multicore CPUs, the number of samples should be at least 16, the number of threads depending on the CPU: 8 threads for a Core i7 with HT enabled is a good idea. 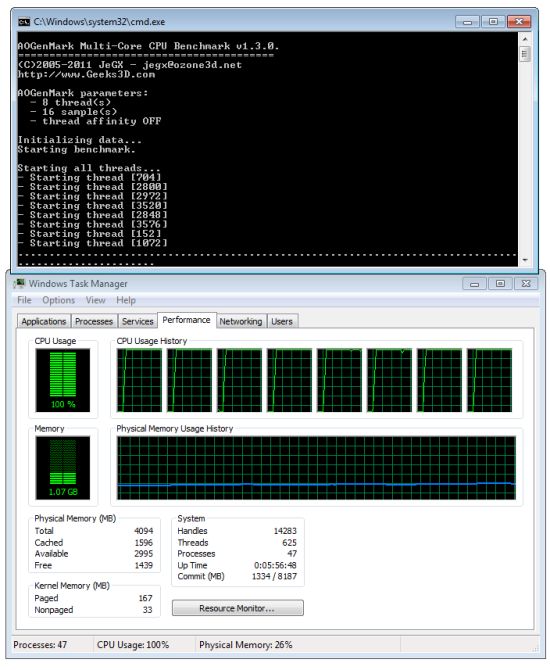 Core i7 960 with hyperthreading running AOGenMark (params: 8 threads and 16 samples, no affinity)

That’s all for the parameters. I added in the zip file six .bat files for launching AOGenMark with 1, 2, 4, 8, 16 and 24 threads, 16 samples and no thread affinity. From my tests, it’s better to let the thread management to Windows.

Here are some scores. And recall that the smaller the elapsed time to finish the bench, the faster the CPU.

And for the curious, here is the algorithm behing AOGenMark: