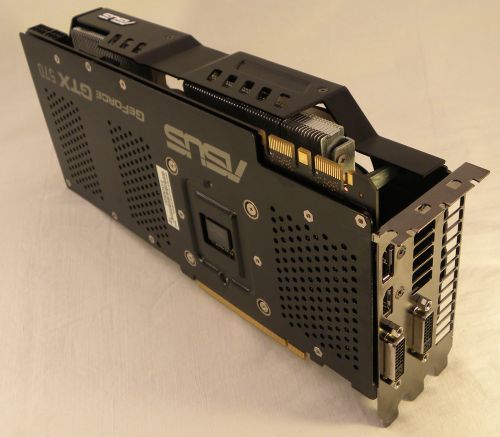 ASUS has recently introduced several graphics cards based on its DirectCU technology: two Radeon-based (HD 6950 and HD 6970) and two GeForce-based (GTX 570 and GT 580). All these cards have in common the new monster tri-slot VGA cooler DirectCU II. The GTX 560 Ti DC2 also features the DirectCU II cooling system but in the 2-slot height version.

Today, the review is focused on ASUS’s GeForce GTX 570 DirectCU II. The three-slot height VGA cooler is bulky but it does it job very well: the noise levels are impressive, even when FurMark burn-in test is running. It’s simple: there’s nearly no difference between idle and full stress load states. 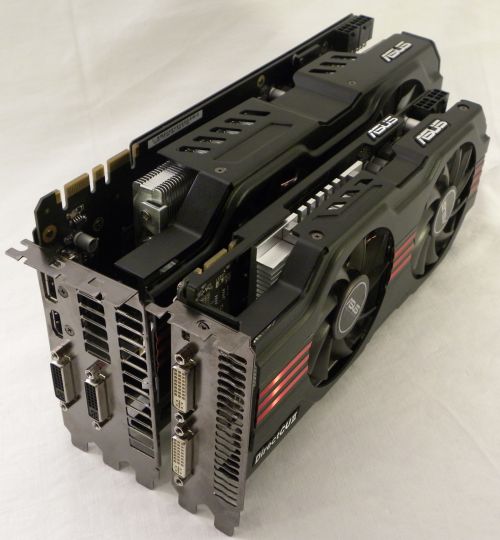 This card is based on the GF110 GPU, the same behind the GeForce GTX 580. The only difference is that GTX 570 GF110 has one SM (streaming multiprocessor) in less leading to 480 SP (shader processors) instead of 512 for a full GF110 GPU. More details on the GTX 570 reference board HERE.

ASUS’s GTX 570 DC2 comes out of the box with a GPU overclocked at 742MHz while the reference clock is… 732MHz (wooww… that’s what I called a massive overclocking!). The 1280MB of GDDR5 memory follow the reference clock speed: 950MHz real speed or 1900MHz DDR speed or 3800MHz effective data rate speed (see here for more details on memory speeds).

The GTX 570 DC2 is available with two DVI (on the right), one HDMI (midle) and one DisplayPort (on the left): 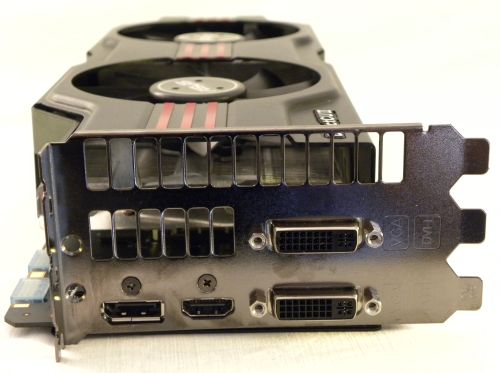 The DirectCU II uses five copper heat pipes in direct contact with the GPU to speed up heat dissipation. Two 90mm fans allow to create the required air flow to throw out the heat: 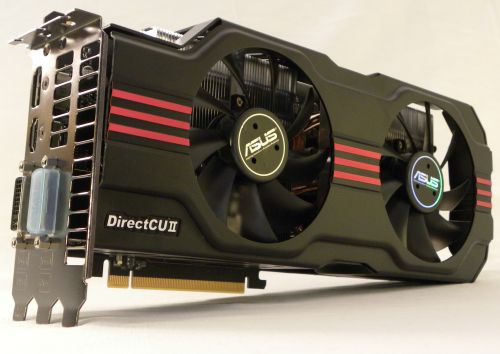 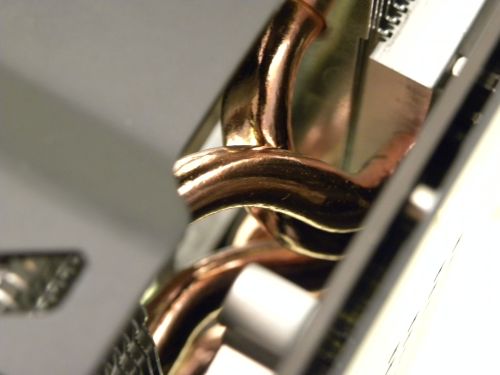 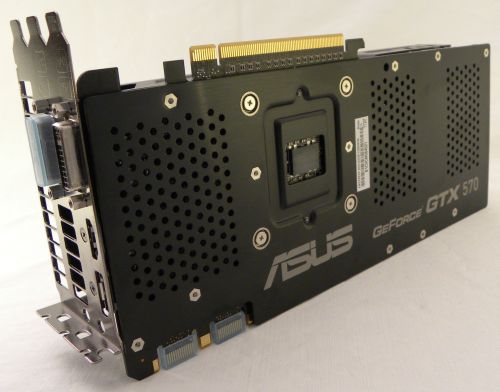 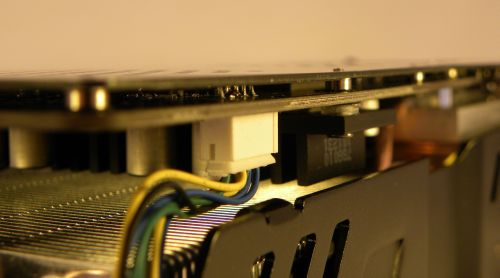 Right under the GPU on the rear side of the PCB, you can see a rather big chip: 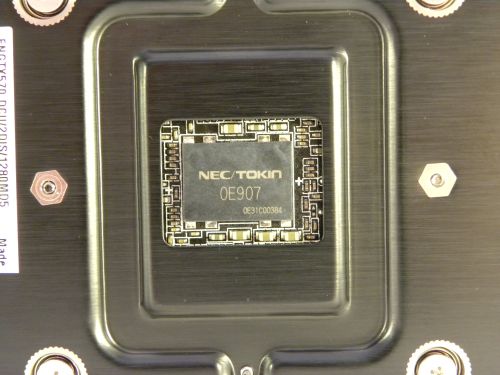 This chip is actually a capacitor: the NEC/Tokin Proadlizer film capacitors (Model: 0E907). This capacitor (2.5V / 900uF) is used to provide a more stable voltage to the GPU.

Two power connectors allow to feed the card: one 8-pin and one 6-pin: 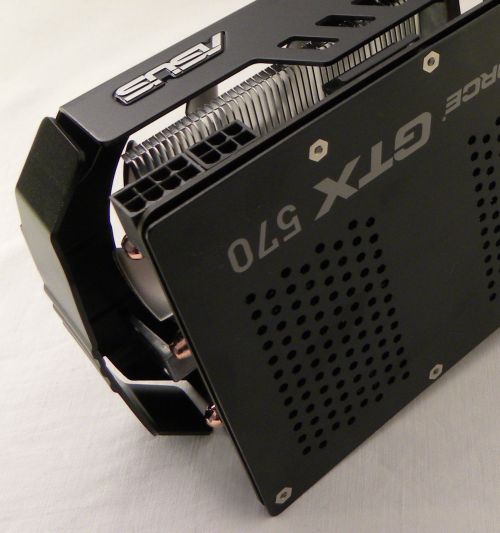 Like the GTX 560 Ti DC2, this GTX 570 DC2 has two LEDS on the rear side of the PCB to show the state of the the power connectors: green: OK, read: PROBLEM! But unlike
the GTX 5460 TI DC2, both LEDs are not very visible because of the backplate… 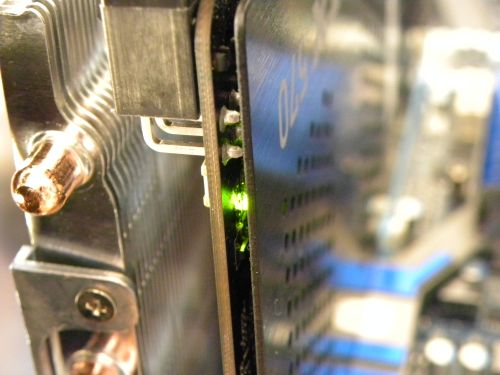 The bundle includes a GTX 570, a SLI connector, a dsub to DVI connector, a 8-pin to two 6-pin power connector adapter, and a CD with drivers and SmartDoctor (ASUS’s overclocking utility): 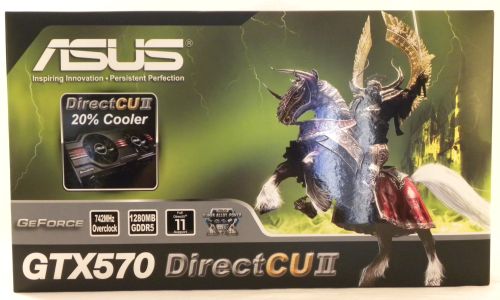 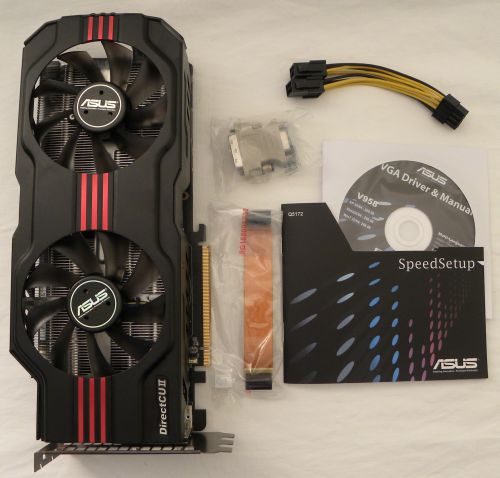