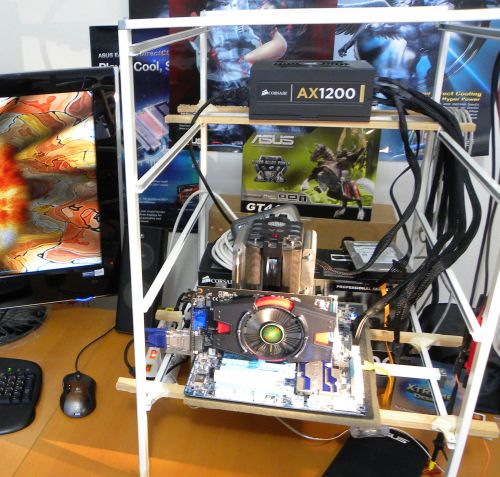 The total power consumption of the testbed at idle with the GT 440 is 90W.

81W is more than the max power the PCI-Express slot can supply (75W). Actually it’s a theoretical limit and high quality motherboards can supply more than 75W.

Here, a properly designed power limiter would have limited the power draw to around 75W…

At idle, the GPU temperature is 30°C and under load, this temperature does not exceed 67°C. And the noise level? Under FurMark stress test, we can hear a little the fan but it’s more than tolerable. We are very very far from the noise of the GTX 480 reference cooler…

Now let’s see the OC caps of this card. I only rose the GPU core clock because GPU voltage tweaking is not available in SmartDoctor or in Afterburner. The GPU voltage or Vcore or VDDC = 1.100V. In the next lines, TPC stands for Total Power Consumption of the testbed. The burn-in test is done with FurMark 1.9.0.

Why did I stop at 930MHz? Because under other tools like TessMark or 3DMark11, the GPU clocked at 930MHz produces artifacts. Then it’s not a stable GPU core clock. As I said in this GTX 560 Ti overclocking article, the goal is to find an OC setting that is stable for a certain set of applications. And for the overclocking of this GT 440, the set of applications is:

After few tests, I found that 910MHz is a stable GPU core clock for my applications set.

Anyway it’s interesting to see that 930MHz is still stable under FurMark. That means that the power circuitry and GPU quality are very good and that the motherboard has a very powerful PCI-Express slot because: (190-90) * 0.9 = 90W! For a GPU overclocked at 930MHz, the PCI-Express slot must supply 90W!!! 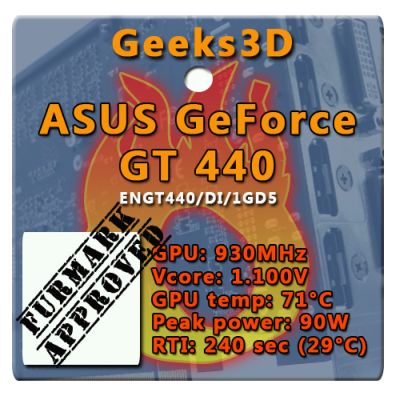 Keep in mind that this award does not represent the max overclocking setting but rather an indication of the quality of the power circuitry, GPU and the cooling system.

The overclocking award is: 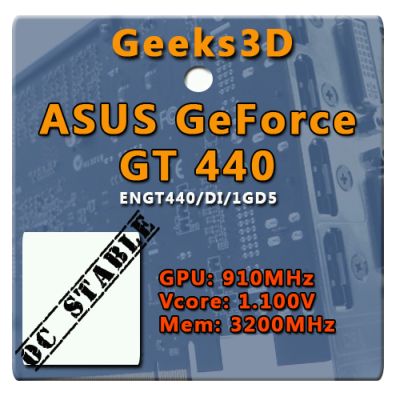