As you can see, there’s not an absolute overclocking setting but rather per-app settings. You can consider FurMark as a way (BUT not as the unique way) to find a very stable OC setting. And as you will see in an upcoming review, a card can be stable under FurMark but unstable under 3DMark11. The important thing to keep in mind, is that the OC setting must be stable for the set of applications you have selected.

But as I said, FurMark has no equivalent when it comes to torture the VGA cooler or the power circuitry: 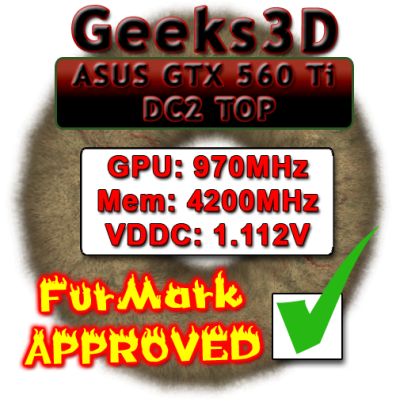 The GTX 560 Ti is stable at 970MHz for the whole set of test applications (even if for some apps, 1000MHz is stable). Then the final OC award is: 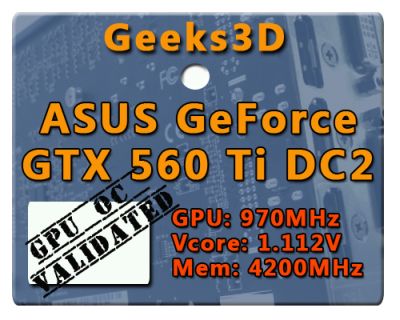 The max Vcore available is 1.150V. Can we go further? Can we apply a higher Vcore and maybe find a higher OC setting for FurMark or the other 3D apps? The answer is certainly yes thanks to some modifications in the GTX 560 Ti BIOS. If possible, I will explore this topic as soon as I can for new article on GTX 560 Ti overclocking. Stay tuned!