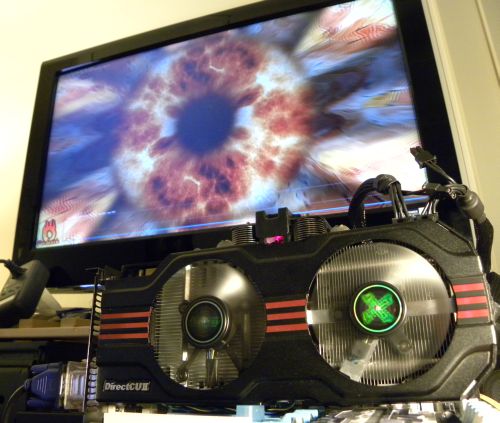 For the power consumption and overclocking test, I used the upcoming FurMark 1.9.0 (still not released due to a little lack of time but it should be there shortly! –already seen somewhere…). The graphics workload in the new FurMark 1.9.0 has been slightly increased, leading to more power consumption (few watts in more). But this extra graphics workload can make the difference with high overclocking settings.

The total power consumption of my testbed in idle with the GTX 560 Ti is 100W.

As I said in the first part of the review, GTX 500 power monitoring hardware (see here: GeForce GTX 580 Power Monitoring Details)
is an optional feature on GTX 560 Ti. ASUS has decided to not implement this power monitoring hardware on its custom GTX 560 Ti DirectCU II TOP. And honestly it’s a good choice, especially for a card with high quality components (chokes, capacitors, MOSFETs) like this one.

With default GPU clock speed (900MHz), the total power consumption of the testbed stressed by FurMark 1.9.0 is 351W for a max GPU temperature of 78°C (FurMark settings: 1920×1080, fullscreen, Burn-in mode, dynamic background, no AA, no postfx).

The reference clock of the GF114 is 822MHz. There is already a factory overclocking of +78MHz. Let’s see if we can go further.

225W is rather far from the TDP of 170W. It’s normal. The TDP is not the max power consumption of the card and ASUS’s GTX 560 Ti is already overclocked. Then a GTX 560 Ti with an overclocked GPU stressed by FurMark can exceed without problem 220 watts.

Here is a stress test with FurMark 1.8.2 Xtreme test mode and the GTX 560 Ti DCII TOP with default clocks: