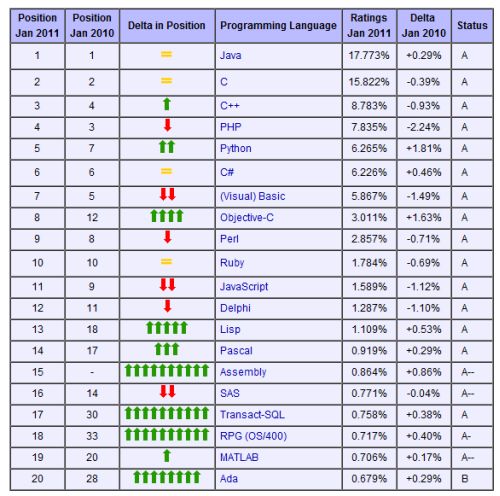 The TIOBE Programming Community Index is an indicator of the popularity of programming languages. And Python just won the Award 2010:

Python grew 1.81% since January 2010. This is a bit more than runner up Objective-C (+1.63%). Objective-C was favorite for the title for a long time thanks to the popularity of Apple’s iPhone and iPad platforms. However, it lost too much popularity the last couples of months.

Python has become the “de facto” standard in system scripting (being a successor of Perl in this), but it is used for much more different types of application areas nowadays. Python is for instance very popular among web developers, especially in combination with the Django framework. Since Python is easy to learn, more and more universities are using Python to teach programming languages.

Python is an incredible and really powerfull language with zillion of libraries (packages). GeeXLab supports Python (2.6 and 3.2) as well as Lua (rank 21) as scripting languages. So if you want to play with Python, think to GeeXLab (here is an example that shows the power of Python).

Here is the rest of the top-50 index: