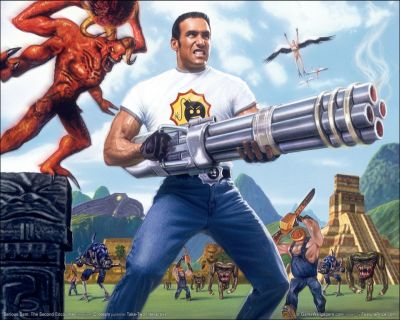 The guys at BigDownloads have interviewed Alen Ladavac, Croteam’s co-founder, about the upcoming Serious Sam 3. Okay this is not a big interview but we can notice a short passage about the Serious Engine technology:

For Serious Sam 3, what can we expect in terms of graphical features? Will it support DirectX 11 effects like tesselation and other features?

Certainly even much more than with the HD remakes. They both run on the same base engine, but there are three factors contributing to SS3 looking even better: First of all, the engine was further improved in the mean time, and it is still being improved during the development. Then, there is this artistic limitation of pre-determined content in HD games. Since we wanted to faithfully reproduce the gameplay, we couldn’t change the architectural layouts, which limited what could have been done visually with the levels, including lighting and immersiveness of the environment. Finally, of course, we’ve learned a lot in the process, so we now know how to create even better looking environments.

So tessellation or not tessellation? Humm… If I’m not wrong, Serious Sam is based on an OpenGL engine. So can we expect SS3 with an Serious OpenGL 4 engine?