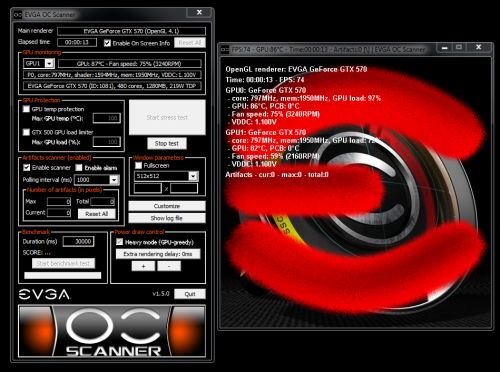 The new version of EVGA GPU stress test tool and artifact scanner is available. OC Scanner 1.5.0 adds the support of GeForce GTX 580 and GTX 570 with a new feature: a GPU load limiter. The GPU load limiter (or GPU load regulator) allows to keep the GPU load to a specified value in order to prevent the throttling back of the GPU by GTX 500 OCP (over current protection). On my EVGA GTX 580 SC, I found that a good value for the GPU load is 90%. With a GPU load of 90%, the card runs at full speed while keeping the power draw in the specifications.

The box of EVGA GTX 580 Superclocked