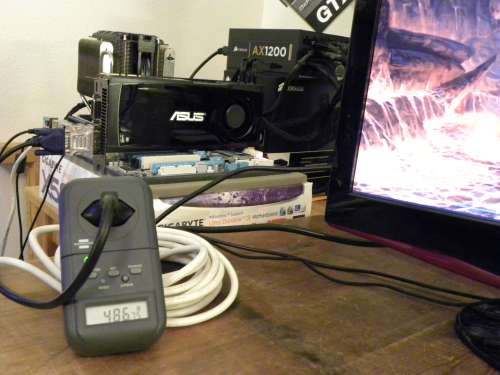 The total power consumption of my testbed in idle is 117W.

When the power draw limiter is enabled, the total power consumption of the system is 304W (FurMark settings: 1920×1080, fullscreen, Xtreme burn-in, no AA, no postfx). When the power draw limiter is disabled, the total power consumption reaches 439W for a max GPU temperature of 90°C (the ENGTX580 is used with its default clocks).

I tested ASUS SmartDoctor to overclock the ENGTX580. I quickly modified the VDDC (or Vcore or GPU core voltage) as well as the GPU core clock to try some overclocking settings: 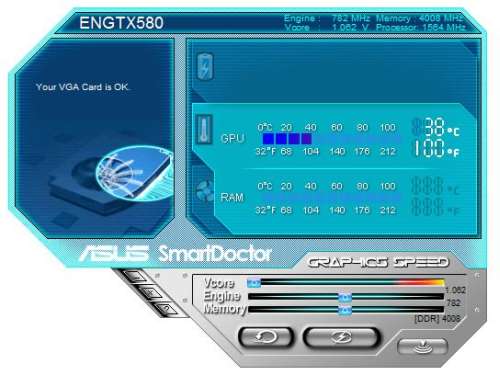 To reproduce such overclocking test, I recommend you to have some quality hardware, because we exceed the electric specifications of the system. In my case, a GIGABYTE A-UD5 motherboard and a high-end PSU: Corsair’s AX1200!

As you can see, with high quqlity products, stressing an overclocked GTX 580 with FurMark is not a problem.

Just for the fun, I did a test with a non-blacklisted FurMark (1920×1080 fullscreen, Xtreme burn-in disabled, no AA, no postFX) with OCP enabled and OCP disabled (thanks to GPU-Z): 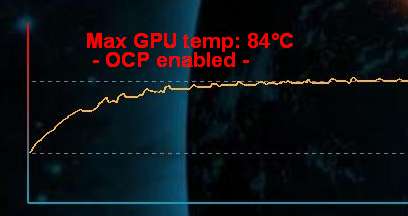 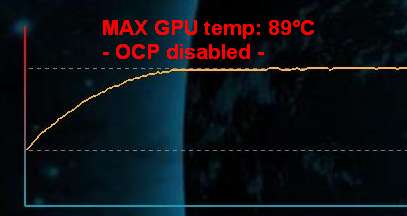 We clearly see the GPU throttling in action in the first picture while the second picture shows a more conventional temperature curve. In Xtreme mode, when OCP is enabled, the GPU is permanently throttled back while this not the case when Xtreme mode is not used.