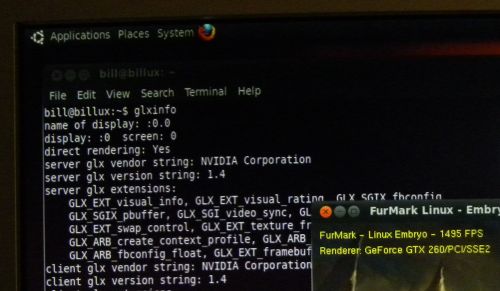 Three days ago I installed the latest version of Ubuntu (10.10 RC) on a dedicated PC (Core 2 Duo E8400 + GeForce GTX 260) to test it. To be honest, I’m a total newbie with Linux. I coded some small programs many many years ago (1996… ouch!) when the text mode was the default interface and you had to type startx or something like this to launch a graphical interface that often didn’t start because the graphics card was not supported or because of another mysterious error. That was Linux in my mind so far. Today, I must admit that things have seriously changed and distributions like Ubuntu are real gems of OS.

I don’t know why, but I begin to appreciate Linux maybe (certainly…) thanks to this Ubuntu distro. I rediscover the joy and power of command line and oddly I feel like at home. I think that the powerful apt-get command is one of the success keys of Ubuntu. Need something? Just type sudo apt-get install something and you’re ok. Nice. That’s what I did for NVIDIA drivers (R256.53), glxinfo, g++, freeglut, or for filezilla. Very very cool.

The network has been detected without problem and even my shared folder on my Win7 station is visible from Ubuntu.

I like the screenshot built-in function. Like under Windows, just hit the print screen key or ATL+PrtScn (for the active window) to capture the screen. But Ubuntu goes further because it automatically opens a screenshot utility with the screen capture in. Then you can quickly screen-capture and save the image.

I also play a bit with compiz-fusion, the 3D desktop manager (see HERE and HERE for some madnesses with compiz). The core of compiz is installed by default on Ubuntu but to get cool effects you have to install some extra plugins. Not a problem: sudo apt-get install compiz-fusion-plugins-extra can fix it 😉 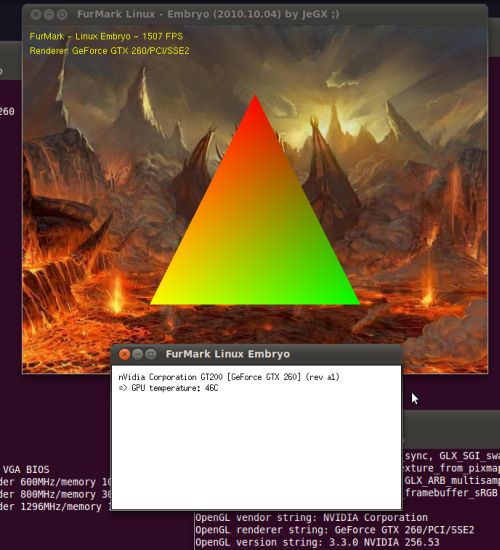 My real purpose with Linux? Maybe porting some of my tools under this great OS.
I think to FurMark and GeeXLab. I received many messages about a Linux version of FurMark so I guess the first app will be certainly FurMark (actually I’m sure because I already started an embryo of FurMark for Linux). I didn’t say that will be an easy task, but perhaps, in the next weeks (end of the year…), we’ll see a furry donut in place of the triangle of death in the screenshot above and why not later, sudo apt-get install furmark will have a meaning 😀

As I said I’m not familiar with Linux, so even if I managed to do the stuff I needed so far, I know I will need the help of regular Linux users for tips and tricks, or for testing FurMark. So Linux / Ubuntu users, don’t hesitate to leave a comment if you’re interested to help me…