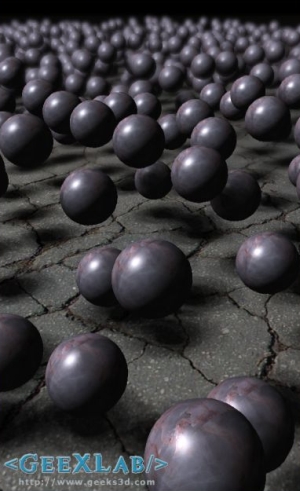 Shadow mapping and DoF postFX (will be released soon)

GeexLab 0.2.2 is ready. This new version fixes some bugs and adds a simple internal MP3 player (does not require FMOD or OpenAL plugins and DLLs). I took the original code from Playing a MP3 in c++ using plain Windows API (thanks @lx for your code). There is a new set of functions to deal with this MP3 player in the HYP_Sound lib: MP3Player_xxx() (see the MP3_InternalPlayer demo in the code samples pack).

New features features have been added to the PRO version like the support of textures in binary format. You can now embed textures directly in XML nodes. And example of embedded texture application is GPU Thermometer:

The GPU Caps Viewer logo (bottom right) is stored in a simple XML file. GPU Thermometer displays GPU and PCB temperatures of all available GPUs in your system. Binary and source code are available with GeeXLab PRO.

Now GeeXLab Lua only and GeeXLab Python + Lua are shipped in the same installer.

Two versions are packed in the installer: GeeXLab_Lua and GeeXLab_Python_Lua. The version of GeeXLab with Python support requires the Python 2.7 32-bit installer.

The code samples pack has been updated and is available HERE.

GeeXLab is a tool (we can call it a demotool) for quick coding and prototyping of real time 3D scenes. GeeXLab can be seen as a real time 3D scene browser (like Firefox for html scripts). You code your 3D scene in one or several source code files, you load the main scene file in GeeXLab and GeeXLab displays the scene. That’s all. GeeXLab language uses a simple mixture of XML, Lua and/or Python and GLSL. All rendering is done with OpenGL API. For an overview of GeeXLab, just read this article.