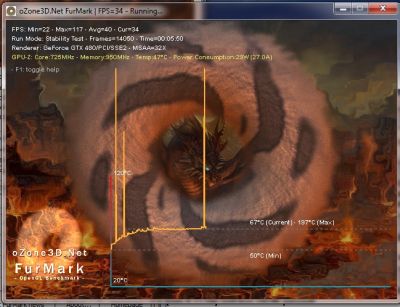 I guess I found the explanation of the spikes in temperature monitoring graphs that some users have noticed with FurMark. Yesterday, a new beta version of MSI Afterburner 2.0 has been published and in the release notes, we can read:

If you look at the screenshot at the beginning of the post, you’ll notice that GPU-Z is running and FurMark displays GPU-Z data. But at the same time, FurMark uses ZoomGPU to read GPU temperature and display the monitoring graph. So from time to time, there is certainly a conflict between GPU-Z and ZoomGPU because both tools want to access to the same sensors at the same time… And this is not limited to GPU-Z or ZoomGPU but to all hardware monitoring utilities.

Then, I will update shortly all my tools (FurMark, TessMark, FluidMark, ZoomGPU, GPU Shark, GPU Caps View) with a spike filter that will use some complex math routines ( if gpu_temp > temp_max then spike! ) 😉

Now a question: why these multiple accesses are not handled by the graphics driver?

Maybe, actually, the graphics driver properly handles multiple sensor readings but only if these readings are done with official driver API functions. Now if a tool performs some kind of low level sensor access, maybe this access is invisible for the driver and that could explain the spikes…

4 thoughts on “FurMark and Spikes in Temperature Monitoring Graphs”