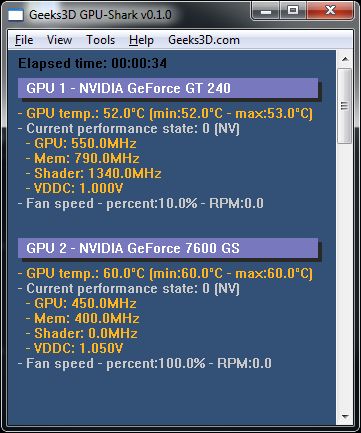 GPU-Shark is a new GPU monitoring utility for NVIDIA GeForce and ATI Radeon graphics cards. GPU-Shark is lightweight (the size of the exe is small – version 0.1.0: 180KB) and there’s only one file that doesn’t require installation (like GPU-Z).

GPU-Shark gives an overview of all your GPUs and has two viewing modes: simplified and detailled. 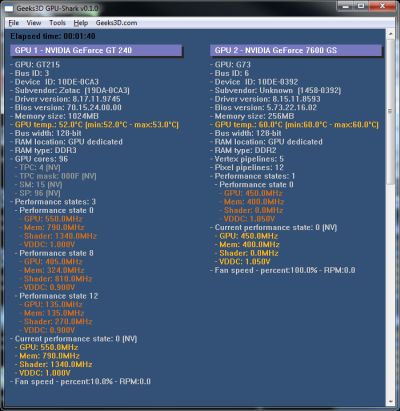 Why GPU-Shark and what’s the difference with GPU Caps Viewer ?

GPU-Shark is mainly a test app for my GPU detection engine (ZoomGPU). This detection engine is used in all my tools (GPU Caps Viewer, FurMark, FluidMark, etc.). That helps me to quickly identify the situations where the detection engine reports wrong data in order to fix the engine.

The main feature of GPU-Shark is to monitor all available GPUs and visualize them all in a single window. That’s the fondamental difference with GPU Caps Viewer. Indeed GPU Caps is focused on the main graphics card, the one that can run OpenGL and Direct3D apps. With GPU Caps, you can’t have access to the information of secondary cards. What’s more, GPU Caps has many other features like OpenCL or CUDA data and has several real time 3D demos (OpenGL and OpenCL). All these features have a drawback: GPU Caps comes with several files (DLLs and demos data).

Don’t hesitate to drop a comment if you encounter bugs or other weird things.