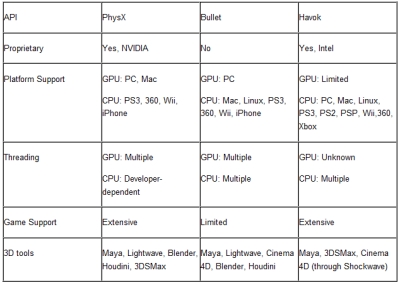 Here is a quick comparison between PhysX, Bullet and Havok.

PhysX: alibrary that can run on either the CPU or GPU across not only the PC, but also the Wii, PlayStation 3 and Xbox 360 – as well as Linux. Acquired when NVIDIA purchased Ageia in February 2008, PhysX is a proprietary physics engine that allows game developers to enable physics effects in their titles.

Bullet: a new physics library that is currently under development by Erwin Coumans, an employee of Sony Computer Entertainment. Bullet is open-sourced under the zlib license, meaning that it is entirely free to incorporate into games and it’s got support for the same platforms as PhysX.

Havok: an engine owned by CPU manufacturer Intel. It offers the widest range of support for platforms, with handhelds supported alongside all consoles.

9 thoughts on “PhysX vs Bullet vs Havok”