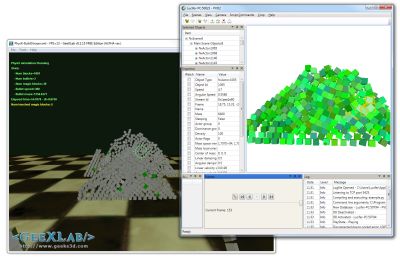 NVIDIA has published the beta version of PhysX Visual Debugger (or PVD), the debugger for PhysX scenes.

PVD is a very useful tool for PhysX developers especially if you have, like in some of my PhysX scenes, some hidden PhysX actors (the PhysX objects) that perturb the scene when the simulation starts. Thanks to PVD, you can visualize such hidden objects and easily debug your code 😉

Keep in mind that you can’t debug the first PhysX based app you have with PVD. The application must have an instruction to connect itself to PVD. GeeXLab, for example, offers such a functionality. Just download the PhysX revolute joints demo and add the HYP_PhysX.ConnectToVisualPhysXDebugger() instruction in the init script. Then start PVD, start GeeXLab, drop the demo in GeeXLab and you should see the PhysX scene in PVD.

PVD 2.0 beta can be downloaded from PhysX Developer Support.