The TPC is a concept we find on NVIDIA GPUs. On G80 and GT200 architectures, a TPC, or Texture / Processor Cluster, is a group made up of several SMs, a texture unit and some logic control.

The SM is a Streaming Multiprocessor and is made up to several SPs (or Streaming Processors), several SFUs (or Special Function Unit – the unit used for transcendental functions such as sine or cosine). A Streaming Processor is also called a CUDA core (in the new Fermi terminology). 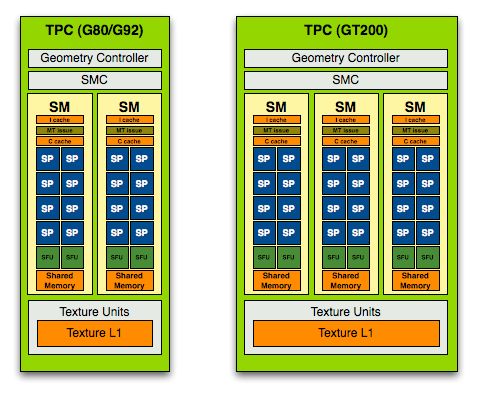 A SP includes several ALUs and FPUs. An ALU is an arithmetical and Logical Unit and a FPU is a Floating Point Unit. The SP is the real processing element that acts on vertex or pixel data.

In OpenCL terminology, a SM is called a Compute Unit or CU.

But in NVIDIA’s new GPU, the GF100 / Fermi, the TPC is no longer valid: only remain the SMs. We can also say that on Fermi architecture, a TPC = a SM.

One thought on “What is a Texture Processor Cluster or TPC?”