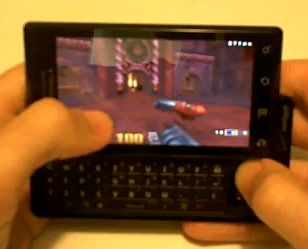 kwaak3 is a port to Google Android of Quake 3.

Android programs are written in Java and performance critical parts can be implemented in a C library and can then be called using JNI (Java Native Interface). 99.9% of the code in kwaak3 is C and the other part is Java. The small Java part initializes OpenGL, handles input and manages audio.

On a Motorola Droid, kwaak3 is playable at around 20-30 fps but with a small map with only two players.