A new version of GeeXLab is ready for your pixel hacks. This version brings several new features like embedded Python on Windows or a new plugin based on the popular ImageMagick tool.

ImageMagick can be seen as the swiss-knife of image tools. ImageMagick is essentially a command line tool and like ffmpeg, it offers a zillion functions to manipulate images:

The nice thing is that a SDK is also available so any developer can add ImageMagick features on its application. For GeeXLab, that means a new plugin plugin_gxc_imagemagick available for all platforms (Windows, Linux, macOS and Raspberry Pi). And a new plugin means a new library for Lua and Python: gh_imagemagick.

ImageMagick supports many image formats in reading and in writing. Then you can use ImageMagick plugin to load textures instead using gh_texture.create_from_file(…):

Once you have a texture created with ImageMagick plugin, you can resize it, crop or apply some effects like sepia, quantize, oil paint, etc:

A demo is available in the gl-21/imagemagick/ folder of the full code sample pack.

1.2 Python shipped with the Windows version

GeeXLab supports two programming languages: Lua and Python. Lua is embedded in the core of GeeXLab and is always available. On the other side, Python is available via a plugin (plugin_gxl_python_xxx.xxx). Python is installed by default on Linux, Raspbian and macOS. So you can immediately start Python programming with GeeXLab on these platforms. On Windows, Python is not available and you have to install it (you have to download Python 2.7 installer from python.org). So far… Now, it’s an old story. Python 2.7 is now shipped with GeeXLab and like on other platforms, you can start Python programming in no time with GeeXLab.

And do not forget to remove python.dll from the plugins/ folder.

Python scripts can be used with Lua scripts in a same demo. You are not limited to an unique language for a demo. For example if you need to quickly download an asset from the Internet, just add a Python script for that job while the rest of the demo is coded with Lua.

These functions open a native dialog box for opening and saving a file as well as for selecting a folder. These functions work fine on Windows, Linux and Raspberry Pi (Raspbian). But these do not work on macOS. Why? Because this extremely advanced powerful operating system expects UI (user interface) functions to be called in the main thread of the application. A GeeXLab demo runs in its own system thread and calls any Lua / Python function from this thread. So calling a ndf_xxxxx() function on macOS leads to a nice crash. To make ndf functions to work on macOS I must find a solution that calls ndf functions from GeeXLab main thread and sends results to the correct thread… Maybe I’ll do it during one of the next rainy days!

Here are screenshots of nfd_open_dialog() on Linux and Raspbian: 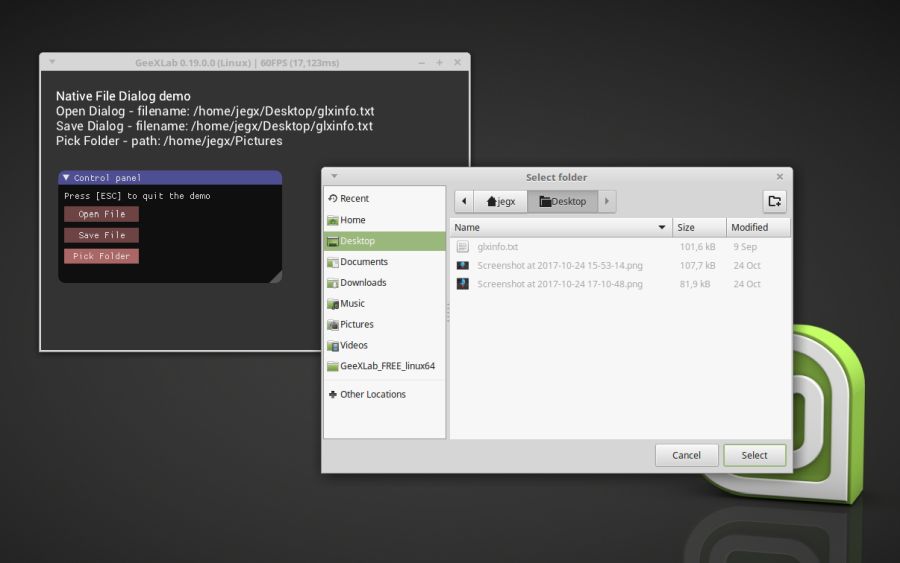 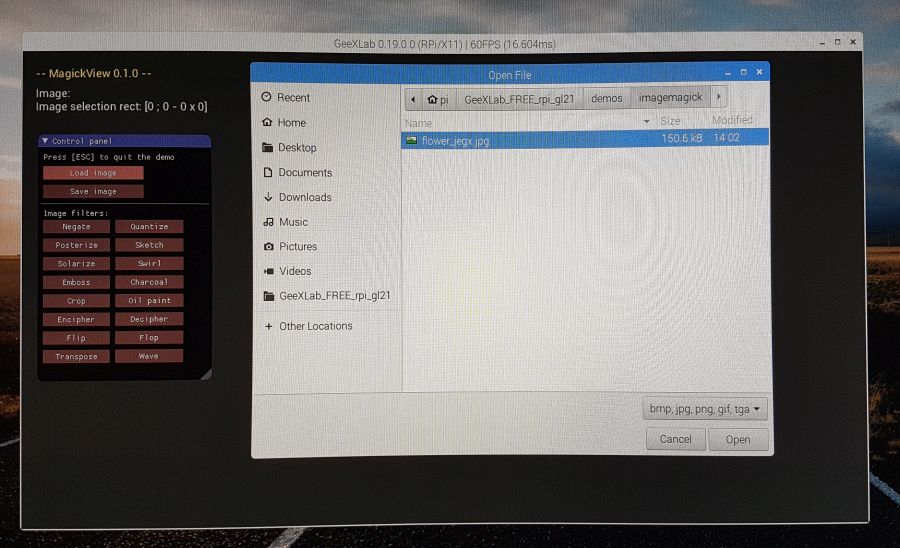 A demo is available in the gl-21/native_file_dialog/ folder of the full code sample pack.