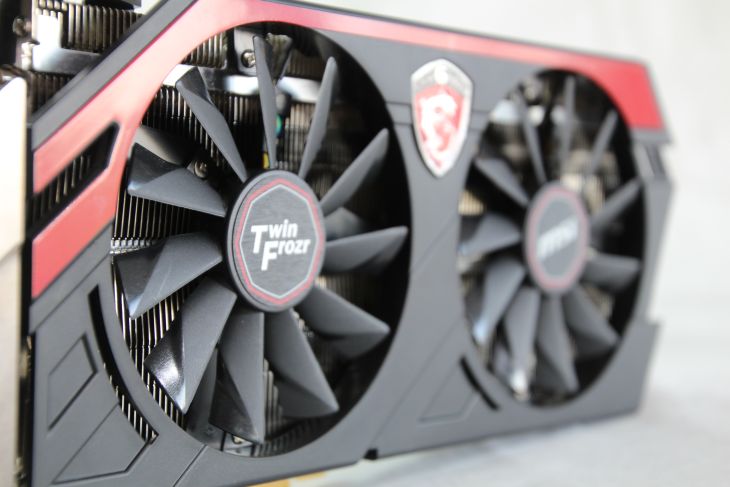 This R9 Gaming is a card for gamers. Although you can overclock it, this card is not intended for overclockers because some OC features like voltage check points are missing. These features are available on the Hawk and Lightning series.

This card is based on the Hawaii XT GPU. More information about this GPU can be found on this page. 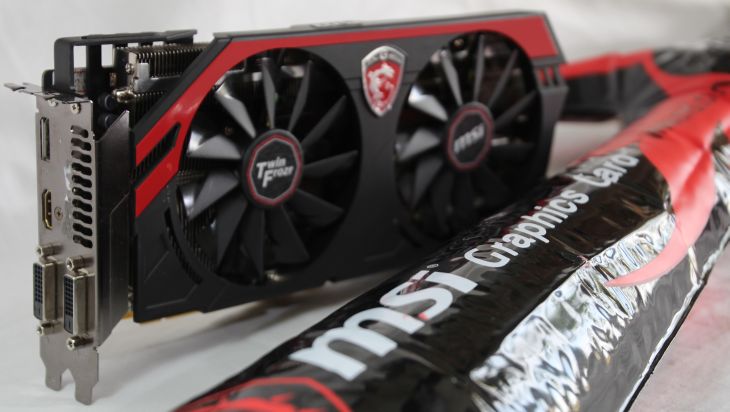 I received the card directly from MSI without bundle… so no picture!

MSI has equipped its R9 290X with a custom VGA cooler based on the famous Twin Frozr IV cooler technology. This is a very efficient cooler that manages to keep low temperatures mor or less quietly: at idle, the VGA cooler is nearly noiseless while under heavy load the noise is tolerable. 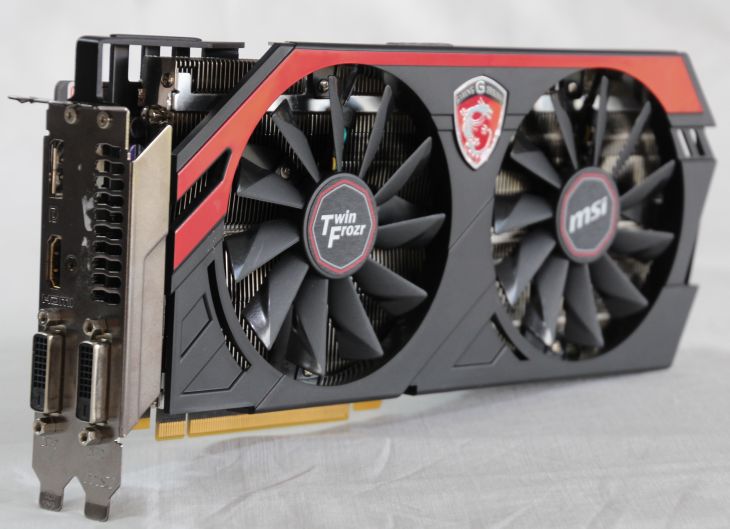 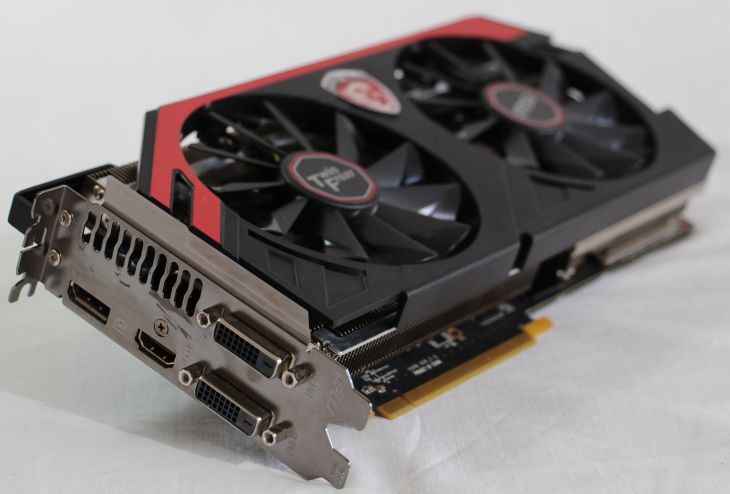 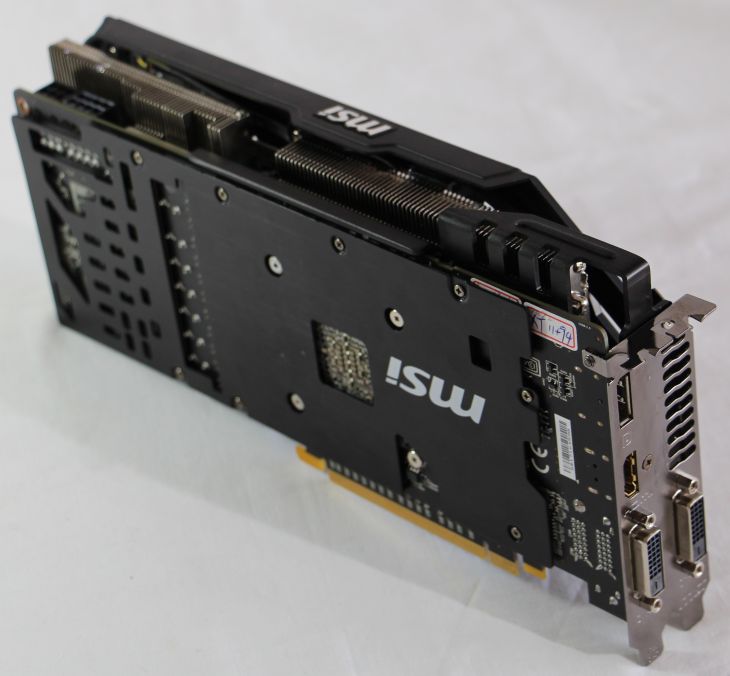 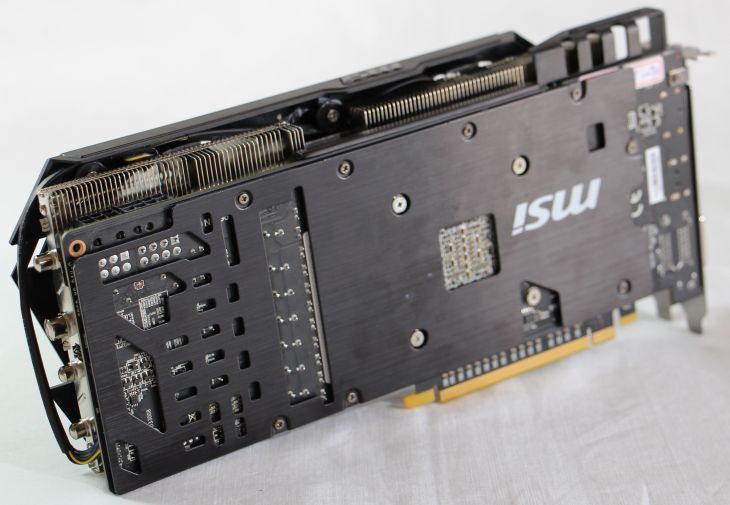 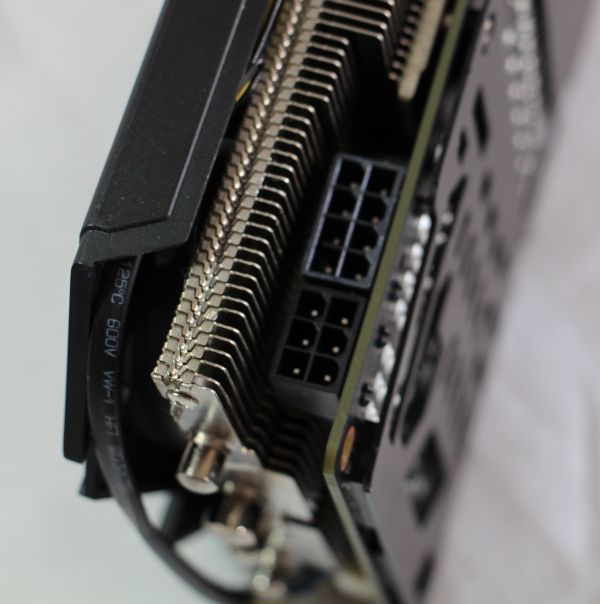 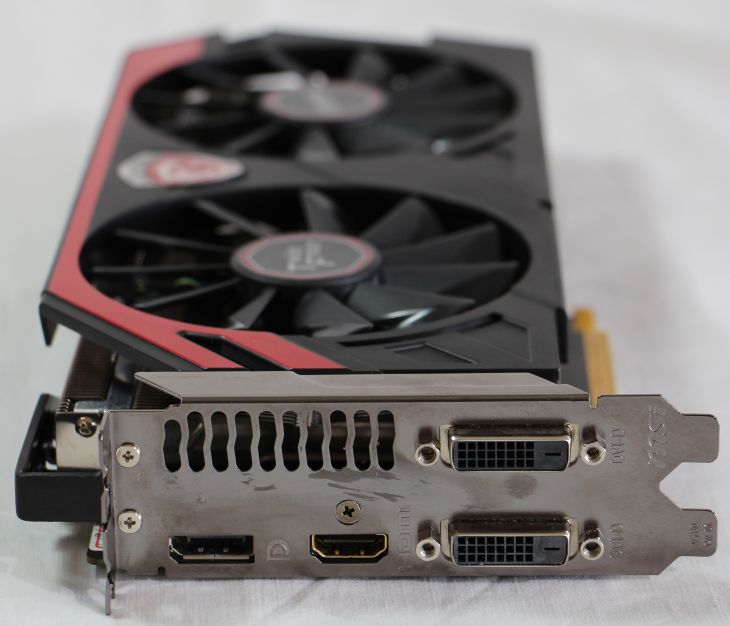 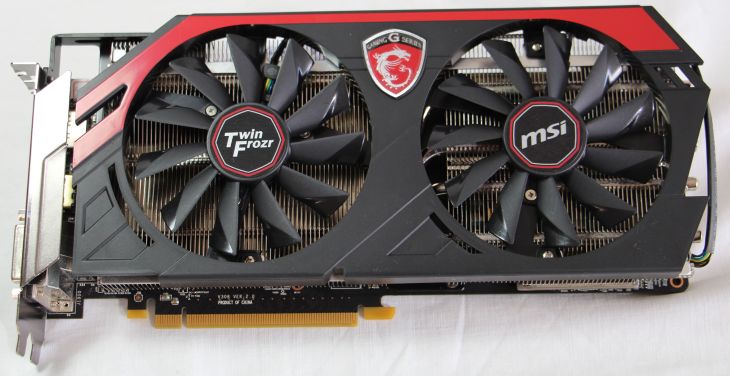 This card has however a little problem of design: once plugged, you can’t easily unplug the PCI-E power cables because the heat sink to too near of the power connectors: 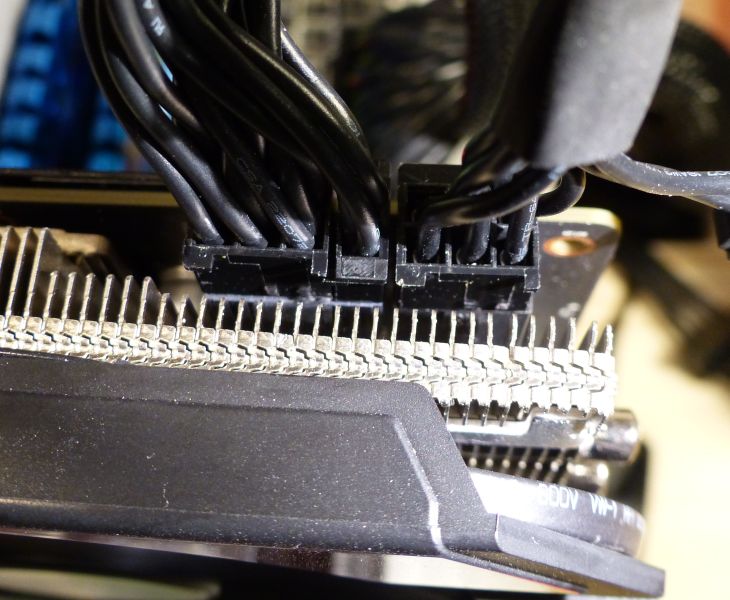 The dirty solution: just remove/break the small tie on each power connector!

Weird conception bug. Looks like nobody has tested this card at MSI labs before the launch day… or PSUs at MSI are all like my PSU, without the tie 😉

This MIS R9 290X has a GPU core clock of 1030MHz (reference clock: 1000MHz). The 4GB of GDDR5 memory are not overclocked and comes with the reference clock speed of 1250MHz real speed (or 5GHz effective speed). 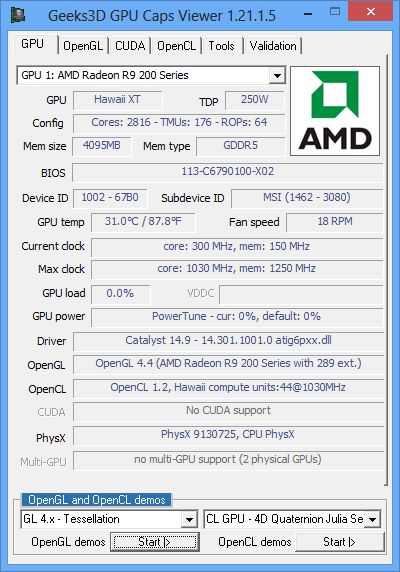 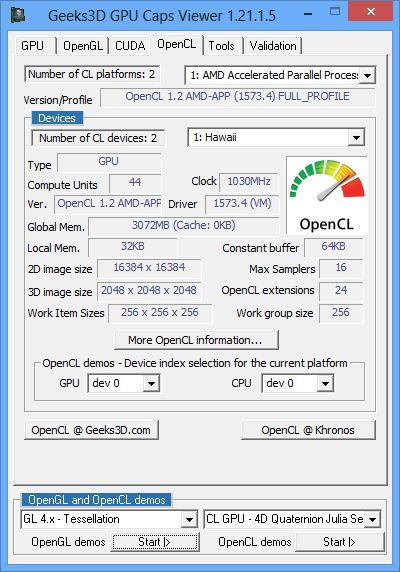 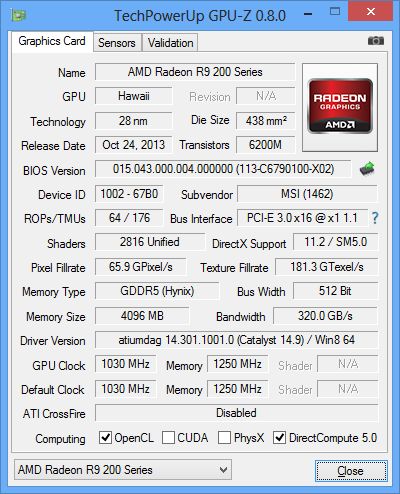 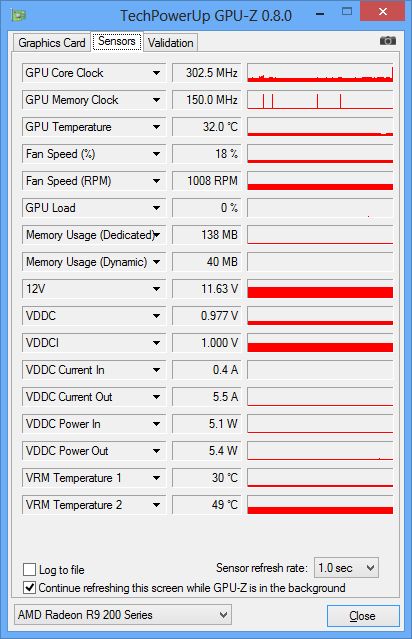 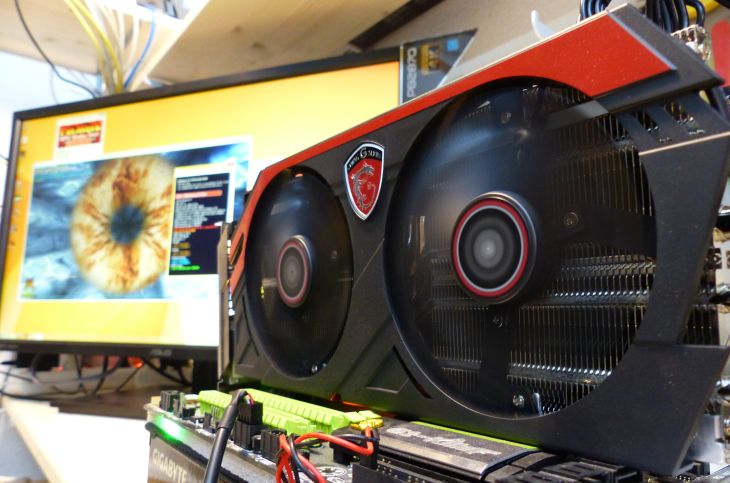 By default, Radeon cards work with the PowerTune set to 0% in the Overdrive section of the Catalyst Control Center. With this setting, the R9 290X runs at around 960 MHz when it’s stressed by FurMark. 960Mhz is lower than the normal 3D clock speed (1030MHz). Why? Because PowerTune tries to keep the power consumption under a threshold defined by the PowerTune setting.

At idle, the total power consumption of the testbed is 55W and the GPU temperature is 31°C which is a nice temperature.

With a PowerTune of 0%, the total power consumption of the testbed is 412W and the GPU temperature reaches 82°C.

When FurMark is running, the CPU pulls around 25W and the total power. The efficiency factor of the Corsair AX 860i is 0.92. An estimation of the power consumption of the R9 290X is:

To unleash the beast hidden behind the Twin Frozr IV cooler, you have to set the PowerTune to 20%: 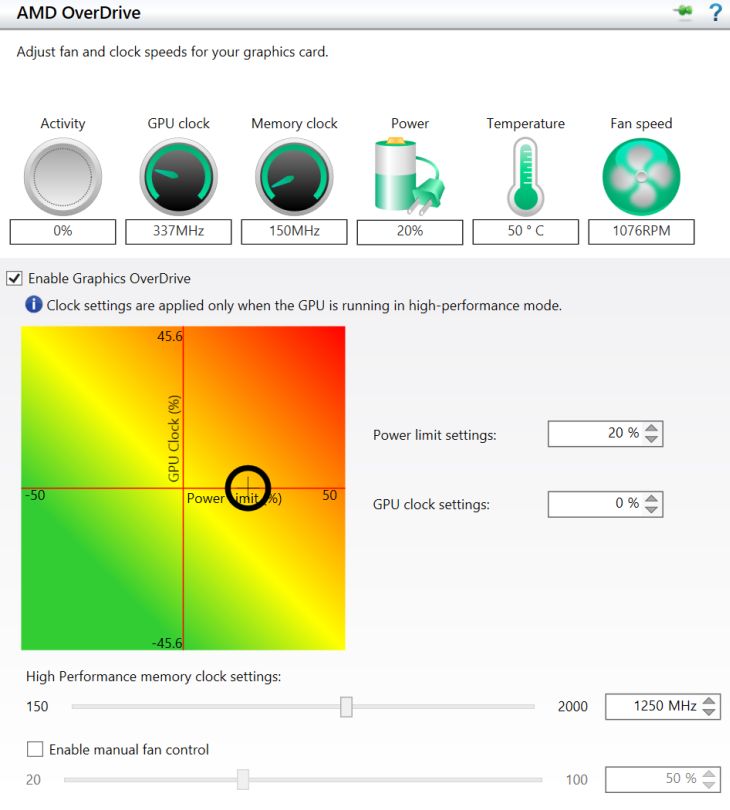 351W!!! It’s an insane power consumption. But the card is designed to resist and it resists. The Twin Frozr IV does it job by evacuating the heat produced by the GPU. But to correctly cool the GPU the VGA cooler has to do some noise… 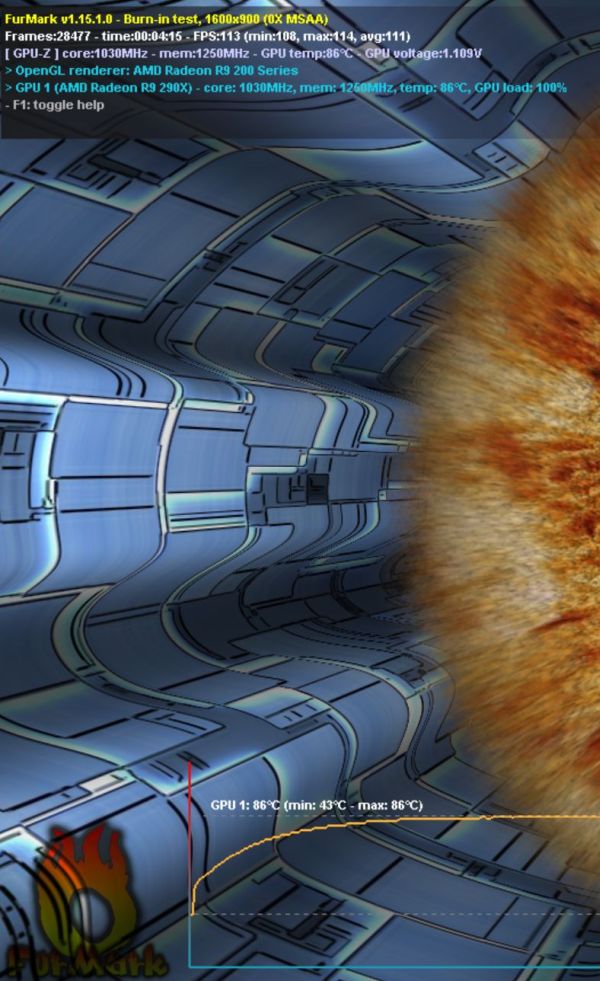 The R9 290X Gaming 4G has successfully passed the FurMark stress test. This card is FurMark-proof.

This R9 290X Gaming 4G is a great product by MSI. The card is built with a solid mechanical structure (backplate, Twin Frozr IV), does not suffer from throttling when it’s under heavy graphics load and has a nice design.