For fanatics of PhysX-based fluids, FluidMark has been updated and this version brings many improvements.

The PhysX engine is now based on the version 2.8.4.6, the latest iteration of the v2 branch of the SDK. The startup dialog box has been simplified and two benchmark presets have been added:

The additional 3D workload allows to smooth results and above all, makes scores more coherent especially when there is a dedicated PhysX GPU. This score is with a GTX 580 alone (actually there is a second GTX 260 but it’s not used for PhysX) and this one is with a GTX 580 (3D) + GTX 260 (PhysX). We clearly see the impact of an additional PhysX card. 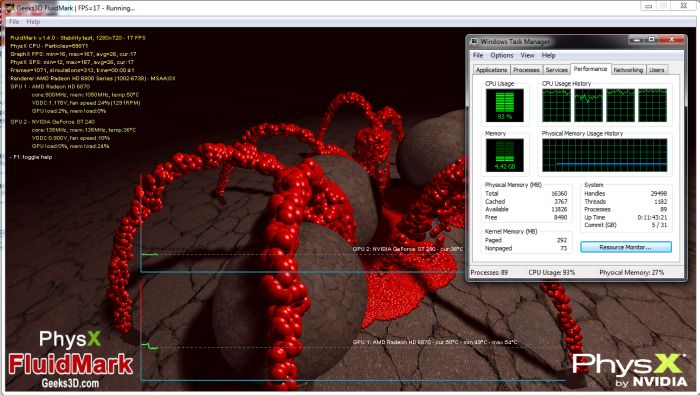 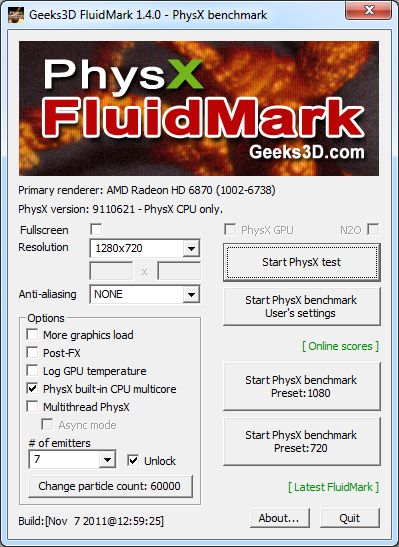 When Multithreaded PhysX checkbox is enabled, FluidMark creates one thread for each fluid emitter for PhysX CPU and does not use PhysX multicore support. The results are the same than with the ones with built-in multicore support.

Another new thing is the score submission procedure. Now there are three ways to submit a score: 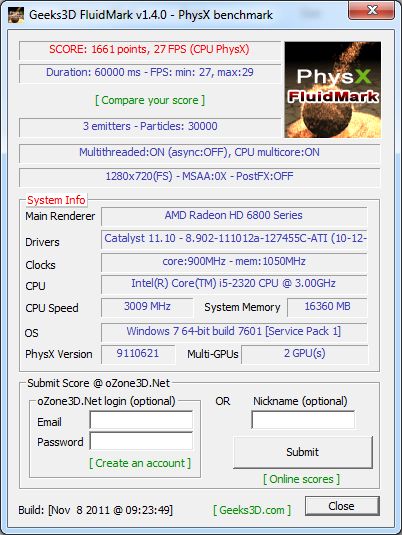 And for Radeon users? If you have a second GeForce card for PhysX, just install the PhysX Hybrid Mod 1.05ff. It works very fine (I used it during the dev of FluidMark 1.4.0: I have a Radeon HD 6870 as main renderer and a GeForce GT 240 for PhysX). Now if you have only one Radeon card in your PC, don’t panic, PhysX can also run in software mode and can exploit all CPU cores.