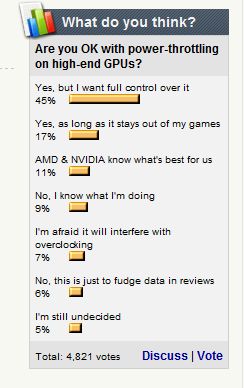 On techPowerUp there is currently a poll about the new power limiter we can find on all recent and high-end graphics cards (GeForce GTX 500, Radeon HD 6900). The majority of users are OK with these new power monitoring systems BUT only if they can have full control over the power limiter (enabling or totally disabling it).

I’m part of this majority. The power monitoring does not bother me as long as I can fully disable it when I need. AMD power limiter goes in that direction with PowerTune and even if we can’t totally disable it, we can control it a bit (+/- 20%) which is nice. I will overclock the HD 6950 DC2 I just received and I hope that AMD power limiter won’t prevent me to find the max OC settings. On NVIDIA cards, the story is different: on GTX 580 / GTX 570, the no-name power limiter is still enabled and you can’t change it. What’s more it’s based on an applications blacklist which really sucks! Just to hide a watt-greedy GPU 😉

But things seem to change because the power limiter is now optional on the new GeForce GTX 560 Ti (read: it’s up to the graphics card maker to implement it or not). And
guess what? ASUS has decided to not implement that power limiter on its GTX 560 Ti (I just received this confirmation) that’s why in my ASUS’s GTX 560 Ti review I managed to run FurMark at full speed without disabling the limiter with GPU-Z. Even major graphics cards maker don’t really like these power limiters.

Another cool thing would be that both NVIDIA and AMD to provide an power limiter API: applications would take the control over the power monitoring system (actually I don’t know if it’s a good thing but I like the idea)…

And you dear readers, what do you think?

5 thoughts on “Are you Ok with Power Limiter (GPU throttling) On Recent Graphics Cards?”