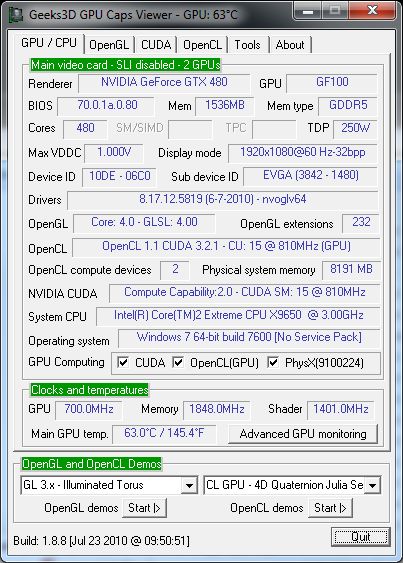 A new update of GPU Caps Viewer is ready. This new version is essentially a maintenance release with minor changes and bugfixes.

NVIDIA has released an OpenCL 1.1 driver (R258.19) and all CL demos work fine except the Julia 4D: the demo crashes in the OpenCL function clBuildProgram() (if a NV’s CL team member stumbles on this post, the Julia 4D kernel is available in the folder media in GPU Caps directory).

In the OpenGL side, the extensions are now read with the new query mechanism. I also added in the OpenGL panel the number of GL and WGL extensions:

In the main panel (GPU / CPU), a new button is available and allows to launch an advanced GPU monitoring tool. By default the GPU monitoring tool is GPU-Shark but you can change it. Just add the tool you wish in GPU Caps folder and rename it in gpu.exe.