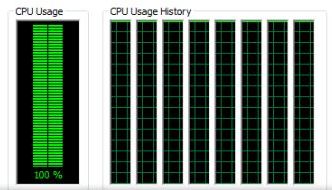 Core i7 with all cores busy at 100% with PhysX FluidMark

The new version of FluidMark comes with a cool feature: the multi-core CPU support.

What does it really mean ? Simply that you can run the whole PhysX fluid simulation on the CPU in a 100% software mode AND the fluid simulation is spread over all CPU cores in order to speed up computations.

Both modes are controlled by the Async mode checkbox:

In both modes, and when Force PhysX CPU is checked, one or several threads are used for the fluid simulation. The number of threads is actually drived by the number of emitters.

In synchronous mode, all PhysX threads are synchronized with the rendering thread. That’s why the number of FPS (frames per second – rendering) is the same than the number of SPS (simulations per second – physics). You discover the term SPS for the first time ? Normal, I created it during the dev of FluidMark to differentiate the speed of graphics rendering to the speed of physics simulation. In synchronous mode you’ll never get a 100% CPU usage because the synchronization introduces a kind of wait state every frame. 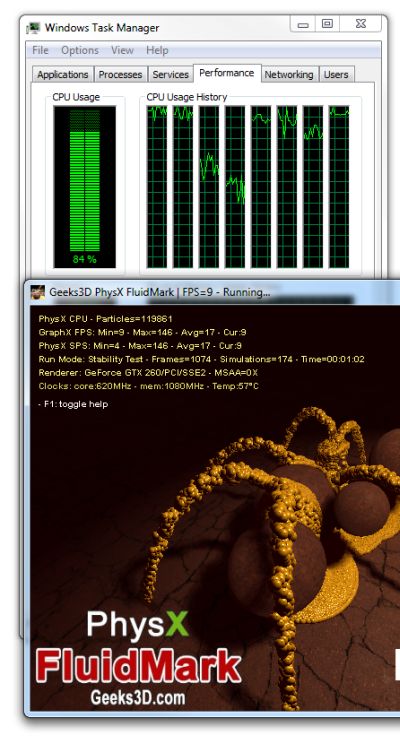 In asynchronous mode, the PhysX threads are decoupled from the rendering thread and there is no longer synchronization between graphics and physics threads. This mode allows a 100% CPU usage if the amount of particles in the fluids is enough large. In my case, I have the 8 cores of my Core i7 busy at 100% with 120’000 particles: 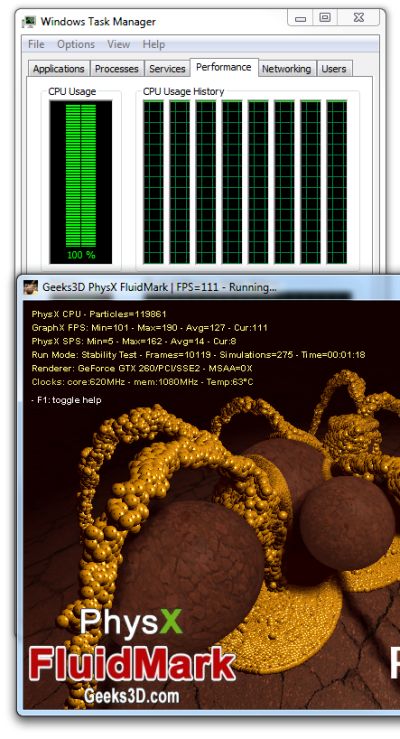