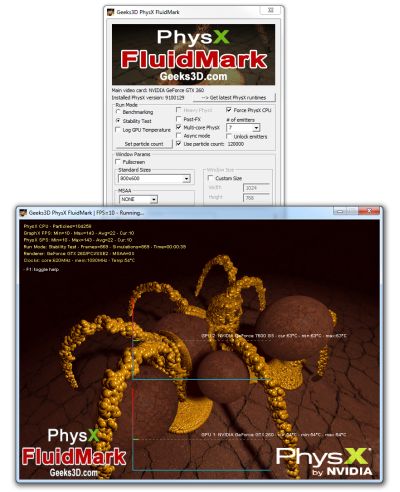 Actually there are two kind of threading when Multi-core PhysX is checked:

The following screenshot shows the multi-core PhysX CPU in action: 120000 particles are simulated on a Core i7 960 with hyper-threading enabled (8 cores): 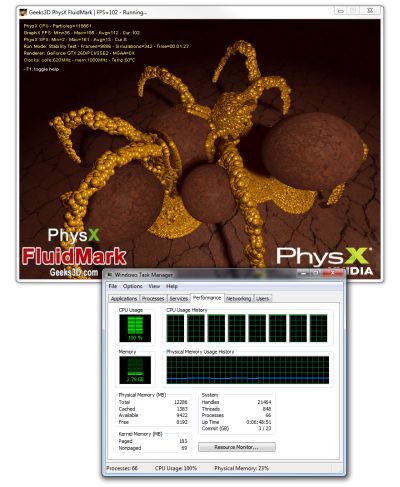 As you can see, multi-core CPU PhysX works fine 😉

I will publish in a next post the results for some GPUs and CPUs.

Other new things concern the particle rendering. In previous versions, particles were rendered using billboarded quads (4 vertices per particle). This technique works fine but is rather CPU greedy. So the modern alternative to these billboarded quads is the point sprite. With point sprite, there is only one vertex per particle, the billboarding technique allowing the quad to face the camera) being done by the GPU. Point sprites bring a significant increase of rendering speed. That’s why I added a Heavy PhysX checkbox. When checked, Heavy PhysX sets the particle emitter rate to 2000 particles/sec whereas by default, the rate is 500 particles/sec. The particle rate can be set in FluidMark configuration file (startup_options.xml). 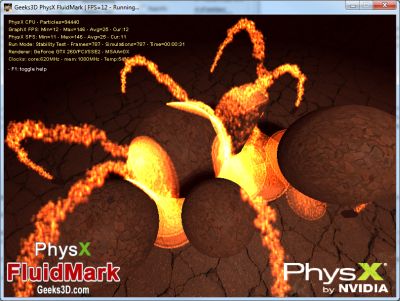 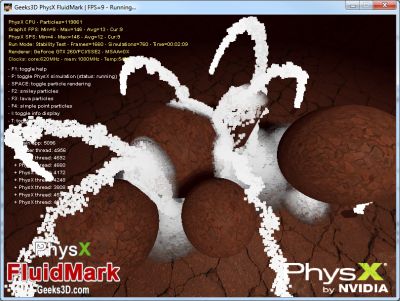 This version of FluidMark has been compiled with the latest PhysX SDK v2.8.3.21.

FluidMark fluid simulation is hardware accelerated for all GeForce 8, 9, GTX200 and GTX400 series with the latest graphics drivers. The graphics drivers for GeForce install the latest version of CUDA and PhysX runtimes. For all other cards that are not CUDA-compliant (GeForce 5/6/7 or Radeon for example) the PhysX engine runs in software mode. So if you can’t start the benchmark, be sure to have the latest PhysX runtimes.

FluidMark exploits OpenGL for graphic acceleration and requires an OpenGL 2.0 compliant graphics card: NVIDIA GeForce 5 and and higher, AMD/ATI Radeon 9600+ and higher or a S3 Graphics Chrome 400/500 series with the latest graphics drivers.