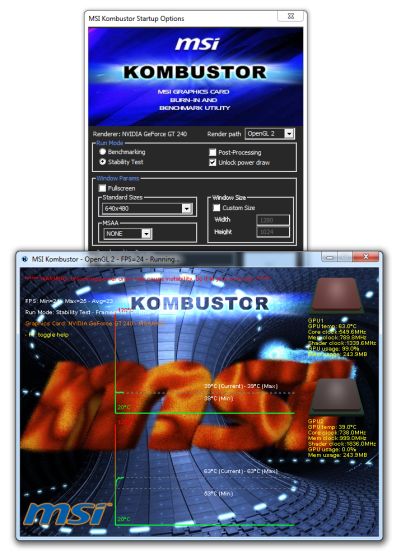 A new version of Kombustor, MSI’s graphics card stress test tool (based on FurMark), is available with the beta 5 of MSI Afterburner.

You can download the latest version of MSI Kombustor here:
[download#133#image]

Kombustor 1.0.7 fixes a nasty bug when it’s used with Radeon (aaahh… Radeon cards…). Actually a crash occurs when the multi-GPU version of Kombustor, etqw.exe, is executed on Radeon with recent Catalyst drivers AND with the Post-Processing enabled.

etqw.exe activates an optimizied profile in Catalyst drivers and this profile seems to change the way the OpenGL instructions are executed. When Post-Processing is enabled, Kombustor executes the following OpenGL code:

This instruction works fine every time except when Kombustor is renamed in etqw.exe.

When Kombustor is renamed in etqw.exe, glTexImage2D crashes because the last parameter is NULL (which is allowed in OpenGL – this use of glTexImage2D allows to allocate the memory for a postfx texture). The bugfix is simply to pass a valid buffer with the size of the texture….

7 thoughts on “MSI Kombustor 1.0.7 and OpenGL Bug with ETQW Profile”