But I understand why the cooler is so loud: with a GPU temperature that touches the 100°C (some tests show 96°C and others, like in the graph above, show more than 100°C) it’s a tough job to cool a hot like hell GPU without noise…

Damien (from Hardware.fr) has done a test and under FurMark, the power consumption of the GTX 480 reaches 298 Watts: 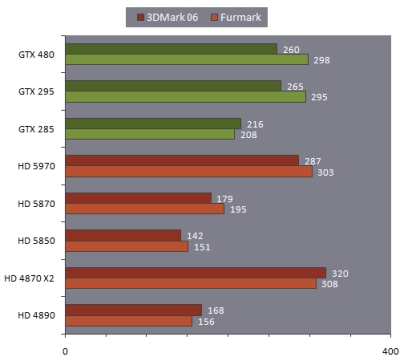 Power consumption in Watts of the graphics card 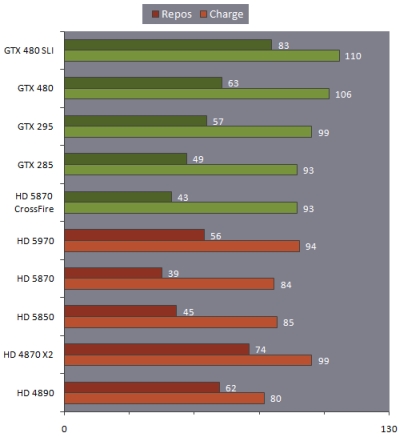 For our load temperatures, we have gone ahead and added Crysis to our temperature testing so that we can see both the worst-case temperatures of FurMark and a more normal gameplay temperature.
…
This won’t have any significant impact on the card, but if you’re like us your eyes will pop out of your head at least once when you see a GTX 480 hitting 98C on FurMark.
…
Under FurMark our results change ever so slightly. The GTX 480 manages to get under the GTX 295, while the GTX 470 falls in the middle of the GTX 200 series pack. A special mention goes out to the GTX 480 SLI here, which at 851W under load is the greatest power draw we have ever seen for a pair of GPUs.