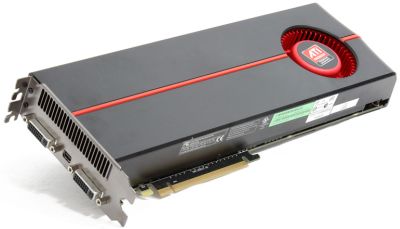 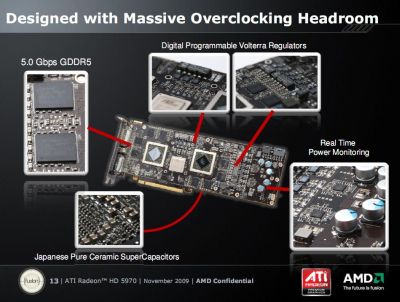 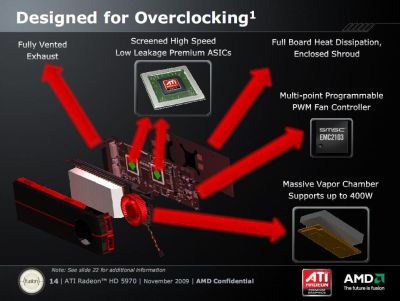 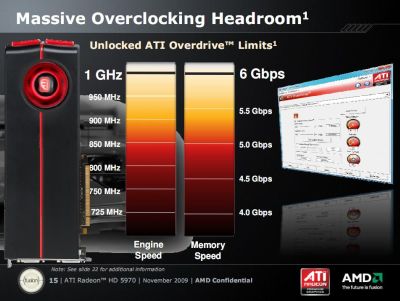 New Radeon HD 5000 series have a hardware protection against overheat (see this post): if the hardware detects a dangerous situation (overload) for the GPU or the VRM, the hardware will immediately throttle back the card by one PowerPlay level.

This is exactly what happened with the HD 5970 tortured by FurMark. With an overclocked core clock of 875MHz, the temperatures exceeded 100 degrees causing the throttling of both GPUs to 550MHz.

In order to avoid cooking itself, the Radeon HD 5970 throttles both cores down, negating any positive performance impact the overclock is going to have. However rather than throttle the cores down just a little, or even to the default operating specification, it drops the frequency to just 550MHz, that’s a 24% under clock on each core.

TG Daily has interviewed AMD’s Dave Baumann about this situation:

The Legion FurMark results tell me that the 5970 is doing exactly what it was designed to do. There are protection measures in place that kick in when thermal or power levels exceed maximum permitted levels, so the card was taking the correct actions to protect both itself and the motherboard.

Now, I would also like to note that this particular benchmark (FurMark) was coded primarily as a stress test. It is certainly not elective in how it utilizes the GPU, as the application basically lights up the entire card to create or emulate maximum power draws and scenarios. No real world app or game does that for an extended period of time. FurMark was lighting up everything, with average power draws exceeding the requirements of any standard app by 20-40 percent.

The slow down from 875MHz to 550MHz is maybe a little too much. I hope it can be tweaked by the driver (even if it’s a hardware protection) so next versions of Catalyst could improve this protection and find the right clock that will protect the hardware avoiding this big drop.